The University of Arizona released a draft report on the effects of the spill of more than 3 millions gallons of toxic water from the Gold King Mine in Colorado. There has been concern about metals contained in the water and metals that may settle into the river sediments.

UofA says, “Once water and sediments from the Animas River enter the San Juan River, they are diluted and mixed in with many times the volumes water and tons of sediments that this river carries daily down to the Colorado. Therefore, it is highly unlikely that the overall water quality of the San Juan or the Colorado rivers have been or will be measurably affected by this release.”

The report contains a table which shows the estimated metal content of the water near the release site. The yellow-orange color was due mainly to iron. 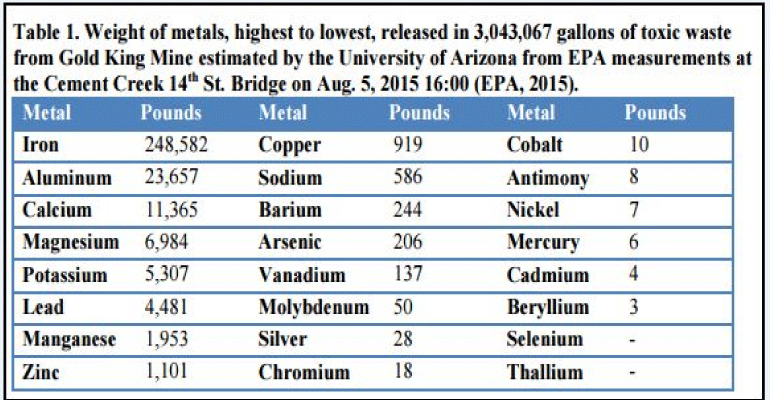 There was some concern about cadmium in the Yuma agricultural area because cadmium can accumulate in vegetables and grain. However, UofA says, “Using Colorado River daily flow volumes of water and sediments, we estimated that cadmium levels in water will be non-detectable and several orders of magnitude below the drinking water standard of 5 micrograms per liter (5 parts per billion).”