Desert Bighorn Sheep (Ovis canadensis) are well-adapted to rugged, rocky desert mountain ranges and canyons. They prefer precipitous slopes and cliffs where they can be safe from predators. They have very good eyesight which helps them navigate steep ledges.

As described by the Arizona-Sonora Desert Museum: “The desert bighorn is a heavy-bodied, gray-brown, deer-sized animal with a large white rump patch. Both males and females have horns, but the males’ are much larger, growing into a curled spiral shape over the course of several years…The ewe’s horns are narrow and only grow about 12 inches long (about a half curl). The male’s horns are broad and massive and eventually curl in nearly a full spiral. The ram’s horns may weigh as much as 40 pounds.”

The diet of Bighorn Sheep consists of many different grasses, mesquite leaves and beans, desert lavender, fairy duster, desert ironwood, palo verde, globe-mallow, cactus fruits, and agave. In hot weather, they generally eat in the morning, then seek shade to process their cuds. “Bighorns have a complex 9-stage digestive process that allows them to maximize removal of nutrients from food of marginal quality.” In winter, the bighorns can get all the water they need by eating green vegetation. (DesertUSA)

According to DesertUSA: “Males do not defend territories but rather engage in battles over mating access to a particular female. Age as well as horn size determines male dominance status. Rutting season is in the autumn and early winter, and births take place in the Bighorn sheep spring, though mating can last from July to December. Gestation lasts from 150-180 days. One or two lambs are born from late February to May. Within a few weeks of birth, lambs form bands of their own, seeking out their mothers only to suckle occasionally. They are completely weaned by 4-6 months of age.”

Bighorn Sheep have been in the news lately because of a controversial program by Arizona Game & Fish to reintroduce the animal to the Santa Catalina Mountains near Tucson. See the AZGF page: Arizona Game and Fish Big Horn Sheep Website. I have commented on this program in a previous article: Mountain lion dietary supplementation plan.

In California, it’s Bighorns versus renewable energy: “The Bureau of Land Management issued a decision allowing the Soda Mountain Solar project to move forward on developing more than 2,813 acres of public land directly adjacent to the Mojave National Preserve that would cut off a vital route for desert bighorn sheep and damage other desert resources.

Hunting. According to Arizona Game & Fish: 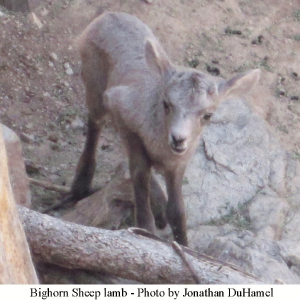