In 2008, Politifact determined that the Vietnam veterans who claimed that Sen. McCain was a traitor and a “Hanoi Hilton songbird” were “Pants on Fire wrong.” The press gave McCain a pass and attempted to destroy his critics.

TRUNEWS is run by a conspiracy theorist, Rick Wiles, who has been described as the “most out there bigot yet.” That description was in response to the End Times broadcaster’s claim that he was renouncing his American citizenship because of Marriage Equality. 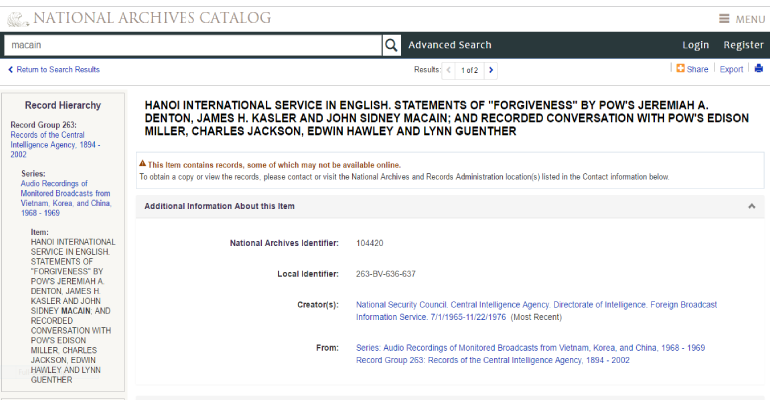 The broadcast has often been referred to by McCain critics, but could not be found. Gotnews.com reports:

WeSearchr uncovered the tapes after filling a $10,000 bounty for their release thanks to conservative news site TruNews.com and 15 other anonymous contributors….. WeSearchr’s anonymous researcher found the tapes hidden deep within the U.S. National Archives in College Park, Maryland, just north of Washington, D.C….. John McCain’s name was misspelled “Macain.” The tape was also mislabeled “Sidney,” which is John McCain’s middle name.

A post on the Democratic Underground.com by Vietnam Veterans Against John McCain in 2008 reads in part:

After being periodically slapped around for “three or four days” by his captors who wanted military information, McCain called for an officer on his fourth day of captivity. He told the officer, “O.K., I’ll give you military information if you will take me to the hospital.” -U.S. News and World Report, May 14, 1973 article written by former POW John McCain.

“Demands for military information were accompanied by threats to terminate my medical treatment if I did not cooperate. Eventually, I gave them my ship’s name and squadron number, and confirmed that my target had been the power plant.” Page 193-194, Faith of My Fathers by John McCain.

When the communist learned that McCain’s father was Admiral John S. McCain, Jr., the soon-to-be commander of all U.S. Forces in the Pacific, he was rushed to Gai Lam military hospital (U.S. government documents), a medical facility normally unavailable for U.S. POWs.

The communist Vietnamese figured, because POW McCain’s father was of such high military rank, that he was of royalty or the governing circle. Thereafter the communist bragged that they had captured “the crown prince.”

“McCain had roughly 20 hours in combat,” explains Bill Bell, a veteran of Vietnam and former chief of the U.S. Office for POW/MIA Affairs — the first official U.S. representative in Vietnam since the 1973 fall of Saigon. “Since McCain got 28 medals,” Bell continues, “that equals out to about a medal-and-a-half for each hour he spent in combat. There were infantry guys — grunts on the ground — who had more than 7,000 hours in combat and I can tell you that there were times and situations where I’m sure a prison cell would have looked pretty good to them by comparison. The question really is how many guys got that number of medals for not being shot down.”

For years, McCain has been an unchecked master at manipulating an overly friendly and biased news media. The former POW turned Congressman, turned U.S. Senator, has managed to gloss over his failures as a pilot and collaborations with the enemy by exaggerating his military service and lying about his feats of heroism.

McCain has sprouted a halo and wings to become America’s POW-hero presidential candidate.

For his part, McCain has admitted to less-than-heroic behavior. He has discussed the shame he felt for allowing himself to be used for propaganda purposes.

Fellow POW, Admiral James Stockdale, who was also held as a prisoner of war in the Hoa Lo prison and lead prisoner resistance, won the Medal of Honor for not allowing himself to be used in the manner McCain was. The citation for Stockdale’s Medal of Honor reads:

For conspicuous gallantry and intrepidity at the risk of his life above and beyond the call of duty while senior naval officer in the Prisoner of War camps of North Vietnam. Recognized by his captors as the leader in the Prisoners’ of War resistance to interrogation and in their refusal to participate in propaganda exploitation, Rear Adm. Stockdale was singled out for interrogation and attendant torture after he was detected in a covert communications attempt. Sensing the start of another purge, and aware that his earlier efforts at self-disfiguration to dissuade his captors from exploiting him for propaganda purposes had resulted in cruel and agonizing punishment, Rear Adm. Stockdale resolved to make himself a symbol of resistance regardless of personal sacrifice. He deliberately inflicted a near-mortal wound to his person in order to convince his captors of his willingness to give up his life rather than capitulate. He was subsequently discovered and revived by the North Vietnamese who, convinced of his indomitable spirit, abated in their employment of excessive harassment and torture toward all of the Prisoners of War. By his heroic action, at great peril to himself, he earned the everlasting gratitude of his fellow prisoners and of his country. Rear Adm. Stockdale’s valiant leadership and extraordinary courage in a hostile environment sustain and enhance the finest traditions of the U.S. Naval Service.

At the same time, McCain takes credit for refusing the offer by the North Vietnamese to be sent home early.

About M. Perez - ADI Staff Reporter 583 Articles
Under the leadership of ADI Editor In Chief Huey Freeman, our team of staff reporters work tirelessly to bring the latest, most accurate news to our readers.