Obamacare is financed by cuts to Medicare. As this chart by Investor’s Business Daily John Merline shows, Obamacare has been and will continue to suck trillions of dollars from Medicare. 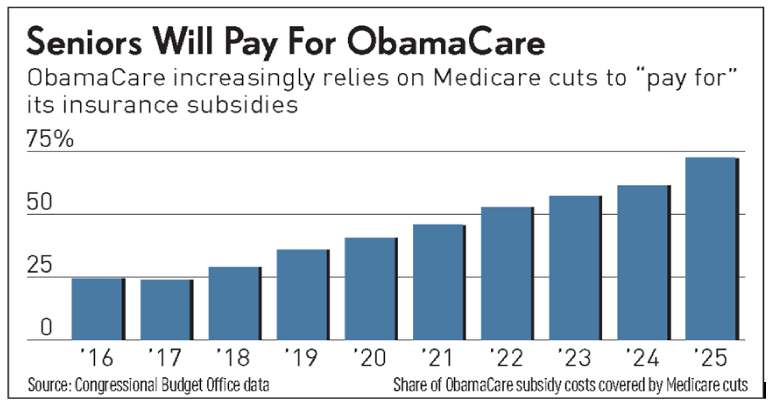 Obamacare premiums are egregiously soaring. In Arizona, Obamacare premiums have increased 116%. Health insurers are leaving the exchanges in droves. United Healthcare, Aetna, Humana and others are turning their backs on Obamacare because of huge medical loss ratios. Increasingly, the only customers seeking Obamacare are those already sick.

Minnesota Governor Mark Dayton admitted, once a major promoter of Obamacare, admitted last October that, “The reality is the Affordable Care Act is no longer affordable to increasing numbers of people.”

Aetna’s CEO Mark Bertolini, this past February, claimed Obamacare was in a death spiral. Only sick Americans are going to the health care exchanges, which is increasing insurer costs higher. The higher costs are forcing health insurers to either abandon the market or raise rates. Higher rates are forcing healthy people out of Obamacare leaving only the sick, hence the death spiral.

Democrats are crowing that Obamacare is good. But it is not. Democrats claim that eliminating Obamacare would mean 20 million people would lose health care. But where were these same Democrats when Obamacare was introduced and millions more lost their health care? Remember “if you like your doctor you can keep your doctor.” “If you like your health plan you can keep your health plan.” These were premeditated lies by President Obama and his Democratic Party.