PHOENIX – Christin Lipinski’s battle with flesh-eating bacteria started when she was diagnosed with the flu in January.

The Peoria woman was only a little worried when she had pain and soreness in her upper left arm. She thought she had pulled a muscle.

She remembers going to the hospital with a fever, but nothing much about ending up in an intensive care unit. She was heavily sedated, on life support, for about two months.

On Thursday, she talked to the news media as her husband, Nathan, sat at her side. She spoke of 23 surgeries to remove the infected tissue and reconstruct the skin on her arm.

“When I first woke up, I thought I was in a car accident,” she said. “I’ve heard of flesh-eating bacteria before, but I have never, ever thought I would have gotten that.”

Lipinski, 37, was diagnosed with necrotizing fasciitis, a deadly flesh-eating bacteria that doctors say kills one in 200,000 people. 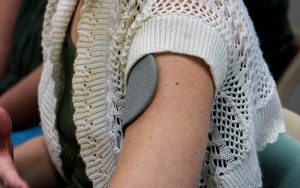 Christin Lipinski, 37, who was first diagnosed with the flu, experienced pain and rash on her arm that turned out to be necrotizing fasciitis, a deadly flesh-eating bacteria. (Photo by Daria Kadovik/Cronkite News)

Foster said it was possibly the first case in the world to use ReCell on necrotizing fasciitis. They had to seek approval for the procedure from the Food and Drug Administration, which granted it within 48 hours. The FDA allows the use of the spray on burns but has not approved for treatment of necrotizing fasciitis.

The process starts with collecting a small piece of patient’s skin and putting it in an enzyme that separates cells into a solution that’s sprayed onto the affected area, Foster said. In addition to its rapid healing properties, ReCell improves the look and function of the skin.

Foster said doctors are puzzled that usually harmless bacteria that live on everyone’s skin can cause such a deadly disease.

People with weakened immune systems can be at risk of necrotizing fasciitis, but it is usually young, healthy people with no risk factors who get the disease. Lipinski just had “bad luck,” Foster said.

The hospital usually has one to five patients with symptoms that look like flesh-eating bacteria but are simply bad infections. Lipinski had a true necrotizing fasciitis – the wound was big and required a lot of reconstruction.

Lipinski said that once she recovered from the sedation and became aware of what was going on, she was determined to get well.

“I’m not going anywhere. I will get over this and get home,” Lipinski remembers telling her husband.

Nathan Lipinski said he can’t wait for his wife to continue working on her recovery at home. She’ll need physical therapy after she leaves the hospital.

He said his thoughts are about “what I can do for her to get her back to the wife that I love, get her back in her routine and make her as comfortable as possible.”

Now Lipinski has other, important things on her mind. She’s eager to return to teaching. And her three kids made a list of things to do after she comes back.