H.R. 1625; the Consolidated Appropriations Act, better known as the omnibus spending bill was renamed the “OmniBUST Bill” by Gosar, “for busting through spending limits put in place in 2011.” The bill passed 256-167.

Gosar and others complained that the bill provides funding for Planned Parenthood and blocks penalties for Sanctuary Cities.

“This pork-riddled bill forks over half billion dollars to build a tunnel for liberal New York Senator Chuck Schumer. This bill also fails to fully fund President Trump’s request for a border wall along the Southern border and does not include language allowing carrying concealed weapons across state lines – a promise made to me and our entire Republican majority,” said Gosar.

“Good process builds good policy,” argued Gosar. “With only 12 hours to read this massive, 2232 page bill and waiving all rules establishing regular order for debate and consideration, Members of Congress were asked to hold their nose and vote. That requires the impossible task of reading 185 pages per hour. No one knows what’s in the bill.”

Just after midnight on Friday, the Senate voted to pass the $1.3 trillion bill. The Senate passed the bill in a vote of 65-32.

Sen. John McCain, who is dying of an aggressive form of brain cancer. was in Arizona and unable to vote on the measure.

This $1.3 trillion bill continues Congress’ pattern of fiscal irresponsibility. At a time when our national debt has surpassed $20 trillion, we have to get serious about reining in our debt and addressing out-of-control spending. I can’t support this omnibus.

The House is about to pass a $1.3 Trillion dollar, 2,300 page #omnibus package – & I’d be willing to bet that very few lawmakers have had the time to read the entire legislation. Many contents of this bill surrender the principles we promised our constituents. I cannot support. pic.twitter.com/4a9eNlkBAn

The spending bill we passed today fully fulfills the President’s border security request for the next 7 months, which includes over 90 miles of physical barrier construction as well as surveillance technology & more boots on the ground. We’re just getting started! pic.twitter.com/eTsl8KAsGq

Hey @realDonaldTrump, whoever “negotiated” this #omnibus backstabbed you. Not only does it NOT include 100 miles of wall as @SarahHuckabee tweeted, it BANS you from building anything on the border with concrete – or even building new prototypes! #ThursdayThoughts pic.twitter.com/PtpHJnyfai

Today, we passed a bill that makes smart investments to support our military and veterans, help Arizona families better afford health care, and ensure seniors have the secure retirement they’ve earned. More about our #AZ priorities in the bill: https://t.co/d6CbwE1cXu pic.twitter.com/2e28uwlKjw

Congressional leaders did something no one expected. They worked together to create a bipartisan funding bill that focuses on the needs of our communities. This will make our communities safer & invest in the future of our nation. #AZ01 https://t.co/532C5LH2yr

On my way back to #AZ01, but I was glad to meet some Arizonans in DC before I left. Thanks for stopping by! pic.twitter.com/8R3cyDVeN5 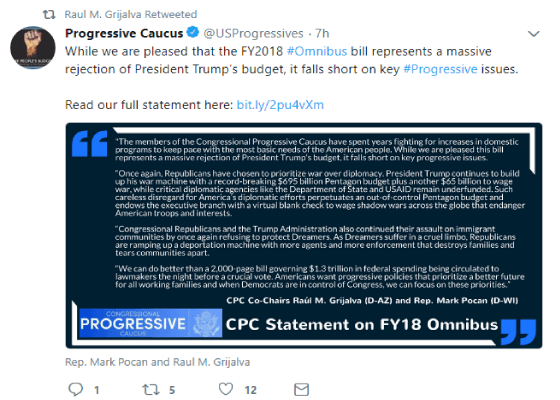