WASHINGTON – A federal appeals court Wednesday overturned the death sentence for Theodore Washington, the last of three defendants still on death row in the 1987 execution-style murder of Sterleen Hill during a “disastrously violent home invasion” in Yuma.

A divided three-judge panel of the 9th U.S. Circuit Court of Appeals found that Washington’s trial attorney failed to present evidence of his client’s “diffuse brain damage, and his history of substance abuse” and other problems that might have weighed against the death penalty.

“This raises a reasonable probability that, had the court been presented with the mitigation evidence the first instance, the outcome would have been different,” Judge Ronald Gould wrote in the opinion for the court, which ordered a new sentencing hearing for Washington.

But Judge Consuelo Callahan dissented, writing that there is “no good reason” to second-guess the trial judge in the case and adding that the only injustice “is our unwarranted interference” in the case.

Lawyers in the case did not immediately respond to a request for comment on Wednesday’s ruling, the most recent in years of appeals by Washington.

The case began on the night of June 8, 1987, when two men forced their way into the Yuma home of Ralph and Sterleen Hill, looking for the Hills’ daughter who had left her common-law husband and returned to her parents’ house.

The Hills were bound and forced to lie face down on their bedroom floor while the men ransacked the house, demanding drugs or money and intermittently twisting a pistol into Ralph Hill’s ear, according to court documents. At some point, the men shot Ralph Hill in the back of the head with a shotgun, reloaded and then shot Sterleen execution-style.

She died but Ralph Hill survived with serious wounds.

Fred Robinson, Susan Hill’s common-law husband, was arrested shortly after the attack and Washington and Jimmy Mathers were arrested soon thereafter. Each of the men was charged with six counts, including murder, attempted murder, assault, burglary and armed robbery.

The three were tried together in December 1987, all three were convicted on six counts and all were sentenced in January 1988 to death row. 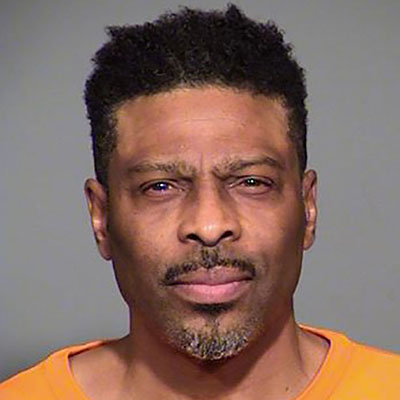 Theodore Washington was the only one of three men still on Arizona’s death row in connection with the 1987 execution-style murder of Sterleen Hill in a Yuma home-invasion robbery. (Photo courtesy the Arizona Department of Corrections)

The Arizona Supreme Court vacated Mathers’ conviction for insufficient evidence, but upheld Washington and Robison’s convictions. The two appealed but had their convictions and sentences upheld by Superior Court Judge Stewart Bradshaw, the same judge who presided at their trials and sentencing.

In a subsequent appeal, however, the 9th Circuit vacated Robinson’s death sentence, agreeing with his argument that his trial attorney had utterly failed to mount a defense in the sentencing phase of his trial.

Gould said the ruling in Robinson’s case cast a “long shadow” over Washington, who made a similar argument – among others – on his latest appeal.

Washington said that had his attorney properly investigated his past, it would have shown that he suffered daily whippings as a child, was sedated with alcohol and later became an alcoholic, had a cocaine problem and a low IQ – all of which could have argued against the death penalty.

Gould said Bradshaw “committed precisely the same error” with Washington as he did in Robinson’s case, and that there was a good chance he would have ruled differently if he had all the facts about Washington’s past.

The court sent the case back with orders for a new sentencing hearing or, if not, for the state to change Washington’s sentence to life in prison.

But Callahan said that Bradshaw did have the evidence he needed and was in the best position to rule.

“There is no good reason for us to dismiss Judge Bradshaw’s conclusion from our lofty perch 25 years later,” Callahan wrote. She said Washington’s claim of an ineffective defense “presents no basis for vacating his sentence.”

Callahan also said there is “a temptation to bend the governing legal standards” to “equalize the outcomes,” because Mathers had his conviction overturned and Robinson had his death sentence vacated.

“However enticing the impulse, that is not our role,” she said. “Ours is the duty to apply the law to determine whether Washington has met his high burden of showing a constitutional violation that deprived him of a fair trial.

“He has not,” Callahan said.

About Cronkite News 2678 Articles
Cronkite News is the news division of Arizona PBS. The daily news products are produced by the Walter Cronkite School of Journalism and Mass Communication at Arizona State University.