PHOENIX – Dozens of spectators, some as young as 9, crowded into City Hall this month to meet Victoria, one of the most complete Tyrannosaurus rex fossils uncovered to date.

To oohs and aahs, Mayor Kate Gallego unveiled the dinosaur’s enormous skull in a world premiere, ahead of an exhibition that runs through May 25 at the Arizona Science Center.

Gallego said she was honored to kick off Victoria’s global tour, which will bring the skeleton to a number of museums over the next five years. Its next stop has yet to be announced.

Victoria, uncovered in South Dakota in 2013, is 66 million years old. One of the rarest and complete specimens in existence, she is the largest traveling T. rex skeleton in the world.

“Tyrannosaurus rex is known as the king of the lizards, but Victoria is a queen,” Gallego said. “It is fitting that she begins her tour in the largest city with a female mayor … as well as the land of (former Supreme Court Justice) Sandra Day O’Connor. We love strong women here.” 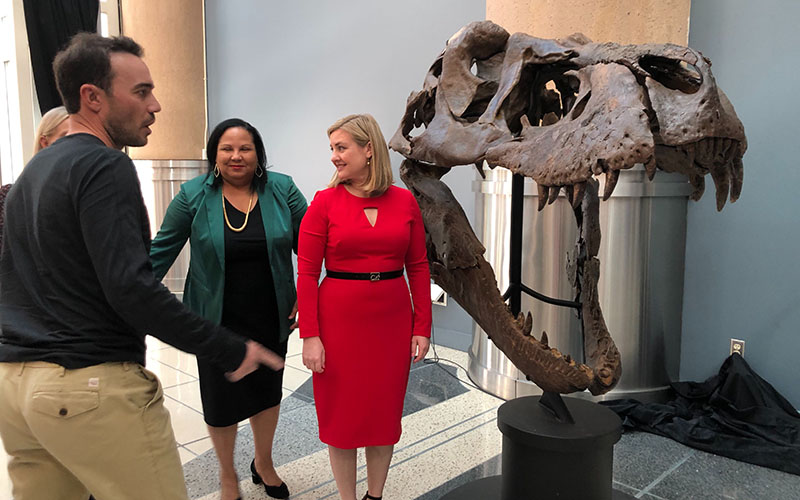 At City Hall, people lined up to have their photo taken with the skull of the Cretaceous Period’s apex predator, which sparked a sense of wonder and joy, no matter how old the observer.

Keith Eagar, a city employee, said he’d never seen a dinosaur skeleton and wanted to be among the first to check out Victoria.

Researchers from Dino Lab Inc., the Canadian company that restored her skeleton, said at the Nov. 7 kickoff in Phoenix that the dinosaur’s thicker bone density indicates it was a female who may have laid eggs during her brief lifetime. Roughly 20 years old when she died, Victoria was not yet full-grown, they said.

Her bones also revealed a bite from another T. rex along her jawline, which caused scarring and signs of infection, a possible cause of her death. Dino Lab employees pointed out the unique markings for curious onlookers.

For more than two years, the Dino Lab team cleaned and assembled the fossils in British Columbia, and then named the skeleton after the city of Victoria, where the team is headquartered.

“It’s very personal,” said Blair Holtner, lead fossil-restoration technician at Dino Lab. “I worked on her skull mostly, and seeing the wounds and what she went through in life, you get very attached. It’s almost like a pet.”

Terry Ciotka, owner of Dino Lab, said Victoria is “by far” the highlight of his career, and paleontologists were drawn to the lab repeatedly to study her because of the high quality of her fossilized bones.

“I’ve worked on triceratops, other T. rex, but nothing beats Victoria,” Ciotka said. “We became so engrossed in the story of Victoria – so enamored with her life – that it just became a real emotional attachment for all of us. … She’s always going to be a big part of my life.”

“I’m so excited for Phoenix to get to experience her,” Williams said.

“I’m hopeful that this exhibit experience will resurrect the sense of wonder we all have as children, when we first learned about dinosaurs,” Humphrey said.

About Cronkite News 2428 Articles
Cronkite News is the news division of Arizona PBS. The daily news products are produced by the Walter Cronkite School of Journalism and Mass Communication at Arizona State University.