Kozachik and Cunningham issued a statement in opposition to the County’s plan to pay for road repairs with money on hand rather than borrow money. The plan, known as PAYGO (pay-as-you-go), was first introduced by Miller, a fiscal conservative, in an effort to break the County’s cycle of borrowing money either through bonds or Certificates of Participation and incurring considerable finance costs as a result.

Cunningham and Kozachik claimed in their joint message that allowing PAYGO “to go unchallenged,” would erode the public trust.

“With their PAYGO policy, the County is keeping City of Tucson residents’ primary property tax artificially higher than it would be without the plan in order to pay for road repair outside of the City limits. They suggest that is fair because the County has allocated 1997 HURF road bond money to City of Tucson roads,” write Kozachik and Cunningham. “The fact is that every road covered with those Bonds was approved by City voters in the ‘97 Bond election, and the HURF funds were generated with gas taxes that were generated from within City limits. The County suggesting the use of those bonds was some sort of a gift to Tucson residents is fundamentally flawed.”

Miller argues that City of Tucson leaders’ understanding of the 1997 Bond is fundamentally flawed, but they violated the public trust long ago when they squandered the Highway User Revenue Funds and Vehicle Licensing Tax monies (HURF/VLT) on operations and management rather than the road repairs for which the money was intended. Miller wrote:

“I would like to remind Mr. Kozachik and Vice-Mayor Cunningham that $121 million of the 1997 $350 million HURF bond measure went to Incorporated roads but was paid back with Unincorporated HURF/VLT revenues only. Pima County has been paying these bonds back with the HURF/VLT that we receive. The City of Tucson benefited from those bond monies as well as other incorporated jurisdictions. Folks living in the unincorporated areas (managed by Pima County) have been getting the short end of the stick for years. It is about time there is some payback from incorporated areas on that $121 MILLION.”

Huckelberry responded to Cunningham and Kozachik in a memo: 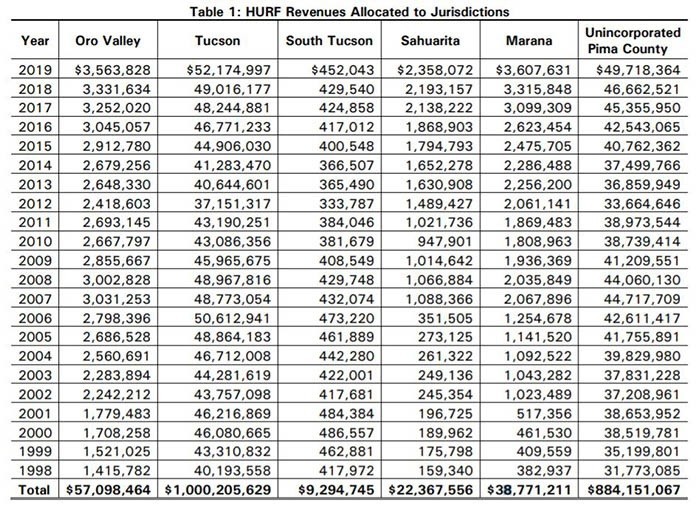 In the recent past, it was Miller who first questioned the equity of the 1997 HURF Bond measure passed by the voters. She wrote in a newsletter to constituents:

The voters within cities and towns were the winners on that election! They received $121 million in road improvements without paying a dime. It was all on the backs of those voters within unincorporated Pima County and we are still paying $18 million per year for those bonds. I doubt the voters were aware of this back in 1997 when these bonds were approved.

This demonstrates yet another reason voters need to be extremely cautious about voting for bonds. The laws on disclosure to voters allow estimates of interest rates and payments to be used in calculations versus what the voters are approving. I doubt any voters in unincorporated Pima County would have approved these bonds had they been informed they were dedicating revenues in the future to pay for roadway improvement monies for cities and towns that were not contributing to the repayment of those bonds. 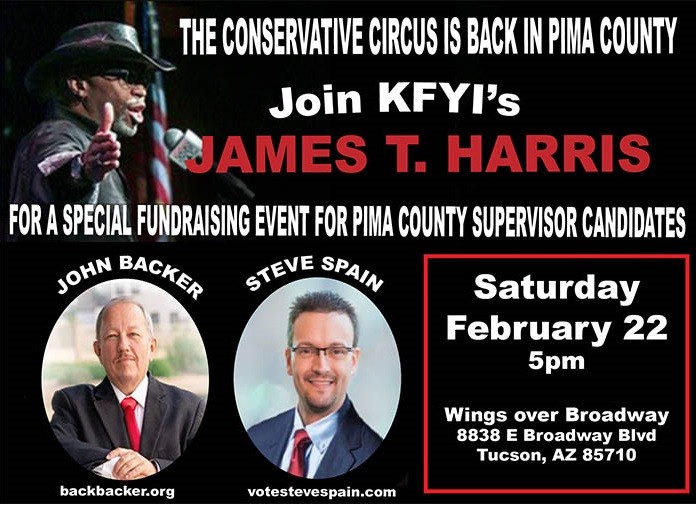 On November 14, 2019 I provided you with a memorandum indicating that while the Pay-As-You-Go (PAYGO) adopted policy allocates up to an anticipated $235 million to road repair in the unincorporated County this amount does not create an equity issue with the municipalities due to the unincorporated 1997 Highway User Revenue Fund (HURF) Bond Program dollars spent in the municipalities.

…Pima County has already spent or committed $173.2 million of its HURF monies in the municipalities through the 1997 HURF Bond program, without adjustment for net present value of those dollars.

To contrast this amount, the General Fund allocations to road repair proposed in the draft PAYGO policy and the proposed FY 2018/19 fund balance allocation range from $210 million to $235 million, depending on whether General Fund support will be needed in FY 2029/30. Since the assessed value of the incorporated County is 58.055 percent1 of the region, the proportion of the $235 million cost potentially borne by tax payers (sic) in the municipalities would only be $136.4 million, a much smaller amount than the $173.2 million of unincorporated County funds already spent in the municipalities.

Using this reasoning the County can spend up to $298.3 million ($173.2M/58.055 %) on roadways in the unincorporated areas before creating a tax equity issue with the municipalities. The current PAYGO policy and FY 2018/19 ending fund balance proposals fall significantly below this threshold.

On February 13, 2020, City of Tucson, Ward 6 Council Member Kozachik and Vice Mayor Cunningham released a Statement to Constituents claiming that the 97 HURF Bonds were: “…generated with gas taxes that were generated from within City limits” and that “The County suggesting the use of those bonds was some sort of a gift to Tucson residents is fundamentally flawed.”

These statements do not reflect the facts. The 97 HURF Bond projects located within the municipalities were, in fact, paid with the unincorporated County share of gas tax based on the State of Arizona HURF allocation formula. Table 1 below shows the distribution of HURF to the County and municipalities since debt for the 97 HURF Bond Program was first incurred.

Finally, it is important to keep in mind that General Fund PAYGO contributions to the unincorporated County road repair plan is a limited term strategy. The overarching purpose of General Fund PAYGO is to fund the construction of future regional amenities, previously funded by General Obligation Bond initiatives. It is concerning that objections are surfacing ten months following my communicating the proposed transition to PAYGO as part of the recommended Fiscal Year 2019/20 budget and four months following adoption of the Board Policy.