PHOENIX – In a sports world driven by stats, Tristen Turlington, Eric Amkraut and Kristy Salazar each boast an impressive one: 5.0.

That’s the cumulative GPA these Arizona high school athletes managed during their academic and athletic careers. With dreams ranging from investment banker to environmental forensics expert to environmental scientist, they epitomize the term student-athlete.

“It was hard at times, but I was always working towards a goal … whether it was like to make varsity or something like that, or to get into a good school,” said Salazar, a volleyball player and recent graduate of Shadow Ridge High School in Surprise.

Her focus paid off. The Ivy League came calling and she will attend Columbia University this fall.

Despite the time commitment required from sports participation, multiple studies have shown athletic involvement can lead to academic success. A 2012 study by the Los Angeles Unified School District found that the approximately 35,000 students who participated in sports achieved between .55 and .74 higher grade-point averages than non-athletes. A University of Kansas study of nearly 140,000 Kansas high school students revealed that “athletes earned higher grades, graduated at a higher rate, dropped out of school less frequently, and scored higher on state assessments than did non-athletes.”

Still, balancing academic and athletics require a deft touch, and this group found success through organization, studying tricks and self awareness.

Support was important, too.

“I just know that my coaches will let me put school first and then softball so that it can meet equal time so that I can be successful,” said Turlington, a junior at Willow Canyon High School in Surprise.

Maintaining a 5.0 GPA doesn’t happen without a commitment to a challenging curriculum. The first step is organizing a schedule and, by extension, time, an opinion shared by all three.

“It’s definitely important to plan ahead and see when you’re gonna have time to finish the assignments,” said Salazar, who started playing volleyball at a young age before advancing to recreation and then club ball.

It wasn’t uncommon for her to cram in homework on the bus to a game. 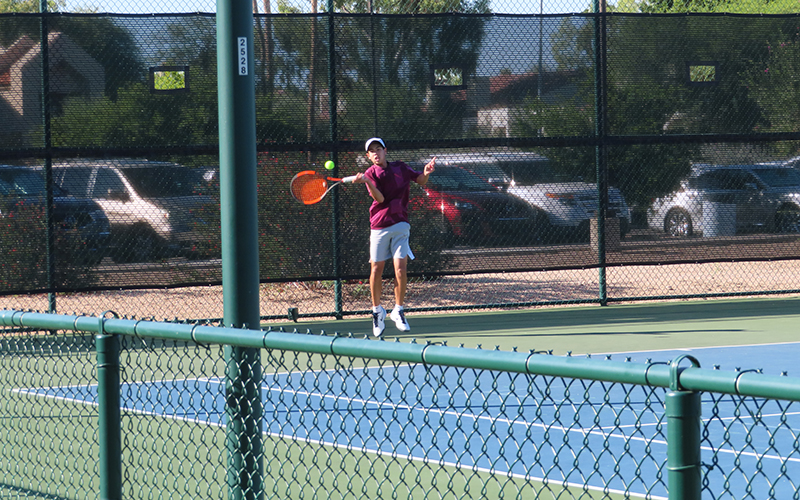 The combination of school and sports leaves time for little else, as Amkraut knows. One of his upcoming courses is Advanced Placement Calculus, which is just one of five AP classes he has in the fall semester.

“During the summer, I’ve been spending like 15 to 16 hours a week on tennis,” Amkraut said. “So I have to make sure I manage my time very well in order to be able to do everything I want to do.”

Their drive for success extends to the classroom and on the courts and fields. During her sophomore year, Turlington took Cambridge classes, advanced courses which lead students toward advanced placement or international baccalaureate classes.

“The teachers are really dedicated to letting students know what they need to do to be successful later on,” Turlington said. “So just keeping up with that type of work is just the most challenging part, but just making sure that you have good time management and staying organized is the best way to stay ahead.”

Studying is not an option but a daily requirement if a student hopes to land a spot at a quality university after high school. All said they have tools that help the process.

“I’ll review my notebooks and maybe make a Quizlet,” Turlington said. “I’ll rewrite my notes just so I can reread them. And it helps to rewrite them so you memorize them.”

Amkraut, a tennis player at Scottsdale Desert Mountain High School, believes the best way to study is by absorbing the material the first time when the teacher relays the day’s lesson. Doing so means “the less time you have to spend studying outside of school.”

He brings that same laser focus to the sport he loves.

“I prefer the individual aspect of tennis where you know anything you do wrong is on your back,” said the junior, who also played soccer when he was young. “You don’t have to rely on others. You know what you’re doing wrong and you know how to improve from there.”

All said they enjoy the challenges presented by their advanced courses. Although Salazar conceded she isn’t as strong in literature and government compared to math and science, she is grateful government challenges her to look at problems from a different perspective.

Turlington welcomes anything that tests her mind or interests, even trying out volleyball for a brief stint. “It’s like a new thing to solve, because I’m always involved in softball. So it’s just like fun and learning new things is always good for me.”

The enjoyment of learning new things is a pattern for her. Willow Canyon softball coach Donnie Tizzano is in awe of Turlington’s drive. Tizzano says Turlington often asks the coaching staff about the finer points of softball.

“They’re deep questions that make you think about an appropriate answer for her. … She’s just, she’s inquisitive all the time, and it’s really impressive to be around her.”

Workload is always a concern. Having a book report due during the week of important games is not ideal. Concern about burnout is warranted.

All three understand the complications that can come from maintaining a difficult balance. If anything, their grades prove they can be trusted with such responsibilities.

Others have “definitely brought up the topic, but I personally, I believe I’m more self-motivated than anything else,” Amkraut said. “So, I’m trying to motivate myself to want to keep continuing both academics and athletics. I’m putting my best foot forward for both of them”

Often, the best motivation is the simplest one and the closest to home: family and mentors. The encouragement from teachers, coaches and counselors was an important factor in her pursuit of high grades, Salazar said.

Turlington never had to worry about support, saying that her family always pushed her to reach the high expectations she has at school. Tizzano said “she’s done nothing but achieve all of her goals up to this (point). … There’s no reason to think that won’t happen again.”

“Just knowing that everybody’s counting on me, which is a little bit hard, but I know that it’s all good for me in the end,” she said.

Amkraut still has two more years of tennis before he heads to college. He hopes to attend Stanford or Cornell and eventually work for an investment bank in New York City.

“I’m not so much looking at playing varsity for any college I go to, because that’s a large time commitment,” he said.

Salazar is already bound for the next challenge of her academic career and starts at Columbia in New York later this fall, the Ivy League school her reward for a 5.0 GPA.

She also expects to leave her sport, volleyball, behind.

“I’m really interested in sustainability and making sure that we do things in a sustainable way in our everyday lives,” she said.

Multitasking tests even the most organized individuals. But if these three students have proven anything, it’s that they can thrive under the most challenging of circumstances.