PHOENIX – With the first-ever virtual NBA Draft taking place Wednesday evening, not much else has changed: 60 prospects will still be selected, NBA dreams will turn into reality and players will still be evaluated and discussed over countless mock drafts up until Commissioner Adam Silver says the magic words: “With the first pick in the NBA draft …”

What has changed, however, is the number of prospects coming out of Arizona this year. Specifically, the University of Arizona, where three one-and-done players – Josh Green, Nico Mannion and Zeke Nnaji – expect to hear their names called. And while all three have potential at the next level, they also come with a variety of question marks. Here’s a closer look.

The Australian-born guard/wing moved to Phoenix in 2013 before transferring to IMG Academy in Florida and ultimately choosing to return to Arizona for college. Green represents the most upside in this draft out of the three Wildcats, as well as being a player who could contribute immediately.

Green, who stands 6 feet 6 but has a 6-foot-10 wingspan, projects as a useful “3-and-D” guy as he can guard the one through three positions and showed off his range down the stretch, shooting 46.7% from beyond the arc in his last 10 games. Additionally, he showcased his slashing abilities quite often at Arizona, being described by scouts as a “one move and go” type of player. He also excelled in transition, scoring in the 79th percentile for points-per-possession in transition, and would greatly benefit from joining a team that likes to push the tempo. 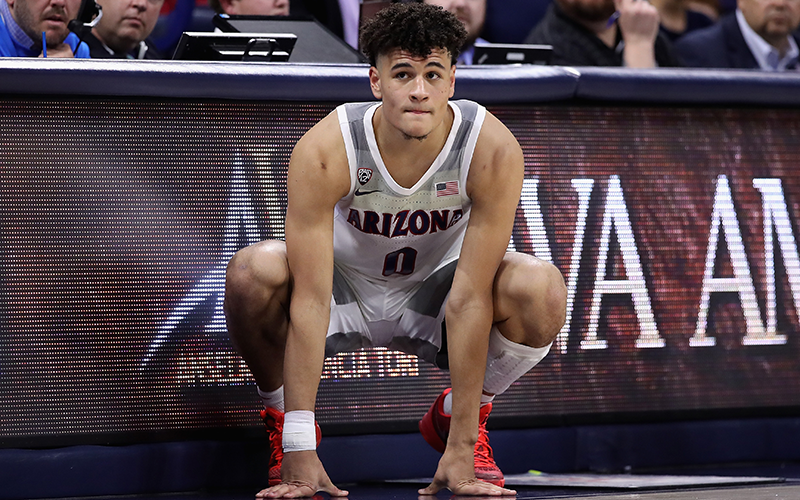 Arizona’s Josh Green, who is 6 feet 6, excels playing defensive and from the 3-point line and hopes to hear his named called in the NBA Draft. (Photo by Christian Petersen/Getty Images)

However, Green does come with two major concerns heading into the draft. In order for Green to reach his full potential, he has to improve as a finisher, only converting 38% of the time at the rim in the halfcourt. The second concern is his ability to create shots off the dribble, placing in the ninth percentile last season with 0.42 PPP on dribble jumpers. He will have to improve his secondary moves if he is to reach his max potential. He is a player widely regarded with room for development but in the right system could be an effective player in his first season in the league.

Mannion, the son of a professional basketball player, was born in Siena, Italy. He moved to Salt Lake City as a child before his family settled in Phoenix. Mannion became a legend at Pinnacle High School, leading the Pioneers to two 6A state championships before taking his talents to Tucson.

At Arizona, Mannion showed flashes of his offensive potential during his one year with the Wildcats but analysts say his lack of defensive versatility and shot selection made it hard for Mannion, who had been a projected lottery pick before the season, to climb the draft boards.

Named to the All-Pac-12 Second Team in his sole season at Arizona, Mannion averaged 14 ppg and 5.3 apg, showcasing his ability of reading the defense to create separation and as a high-confidence shooter despite making just 39.2% of his field goals. But his highest praise comes for his passing ability and overall feel for the game in the pick-and-roll. Also, his transition passing is top-notch and he always looks to push the pace. He has a high IQ on defense and could be a solid defensive player in the NBA if he’s committed to working at it.

While Mannion’s offensive potential is enticing, he also has a few weaknesses. For starters, Mannion has a reported wingspan of 6 feet, 2 1/2 inches for a player standing at 6-foot-3, which could make it difficult for him to guard longer defenders at the next level. Additionally, Mannion must improve physically to become a reliable finisher. He must continue to work on getting separation and absorbing contact.

Overall, Mannion has the potential to be an offensive weapon for a long time in the NBA, which may be enough for teams to take a chance on him, but his lack of versatility on defense may also be what causes him to slide down the draft boards Wednesday night.

The hidden gem of the Arizona draft class, Zeke Nnaji impressed in his first season at Arizona, averaging 16.1 ppg and 8.7 rpg, making enough noise to earn the Pac-12 Freshman of the Year award. The Minneapolis native may have come into his freshman year with little national acclaim, but Nnaji has plenty of eyes on him now as he’s risen up the draft boards to the early second round.

Nnaji, who stands 6 feet 11, projects as a pick-and-roll rim runner early on, thanks in part to his high motor on the offensive end. With the Wildcats he also showcased his finishing skills, converting on 61.8% of his field goals at the basket. Nnaji was also extremely effective in transition, making 83.3% of his attempts. But Nnaji’s best attribute, and what NBA teams should be looking at, is his tremendous motor on both sides of the glass. His energy and hustle is almost unmatched in this draft class. He grabbed more than eight rebounds a game with more than three of those coming on the offensive end. If a team is looking for a high-energy rebounder off the bench, Nnaji is the guy.

One of Nnaji’s biggest weaknesses is that he lacks a feel for the game and is hard to trust with the ball in his hands, committing 70 turnovers in his lone season at Arizona. His perimeter defense is also a concern as he showed flashes but was too often blown by in those situations. Nnaji’s rim protection also must improve if he is going to play in the NBA as he registered only 28 blocks last season.