PHOENIX – A team of researchers at Petrified Forest National Park east of Holbrook have discovered fossilized remains of a new species of prehistoric reptile. The 220-million-year old burrowing reptile is a drepanosaur, an ancient reptile that had a claw on its tail and a birdlike beak.

Originally, drepanosaurs were thought to have lived in the trees that grew lush in prehistoric Arizona, but Bill Parker, a paleontologist with Petrified Forest National Park, said Skybalonyx skapter suggests something else.

“The new one, we think, is actually what they call fossorial, so it actually dug in the ground and burrowed,” Parker said. Researchers suspect the claw on the tail, as well as elongated claws on the reptile’s second fingers, helped it dig for bugs to eat.

Skybalonyx was discovered by a group of summer interns from Arizona State University, Virginia Tech, the University of Washington and other colleges who teamed with park researchers to scour an area of the park known as Thunderstorm Ridge.

Intern Xavier Jenkins, who’s pursuing his doctorate in biological sciences at Idaho State University, is credited with the discovery – which he said he had predicted at the start of the program.

“When I started my internship, they were like, ‘All right, you need to put it into existence. What are you going to find this year?’ And I’m like, ‘I’m going to get a new species of drepanosaur.’”

“And they’re like, ‘You want that? Do you want that to be your intern project?’ And I was like, ‘Sure.’ So that was really cool,” Jenkins said.

He said being out in the park allowed him to focus on his work.

“Every day you find a hundred bones, you’re just kind of putting them in a bag,” Jenkins said. “It (the park) is a little nowhere, so there’s like no internet. So you’re kind of forced to be productive the entire time.”

What is unique about this discovery is the process in which the tiny fossils were cleaned.

“We would screen wash stuff to find little small fossils, like basically collect dirt from the side and if we didn’t see any bone, you’d throw it in, hose it down with water and it would naturally sort, you know, in particle size,” Jenkins said.

Using a series of filters, debris was removed from the bits of fossilized bones, giving researchers a glimpse into what this reptile looked like.

“The technicians at Petrified Forest developed a new technique where they do it in very small batches,” Parker said. “And a lot of times what happens is these fossils will break apart and they’re actually able to put even the very smallest fossils back together under a microscope.”

Researchers plan to use this process for future excavations. Before this new method of finding fossils started, Parker said, researchers struggled to get full bone structures of animals. 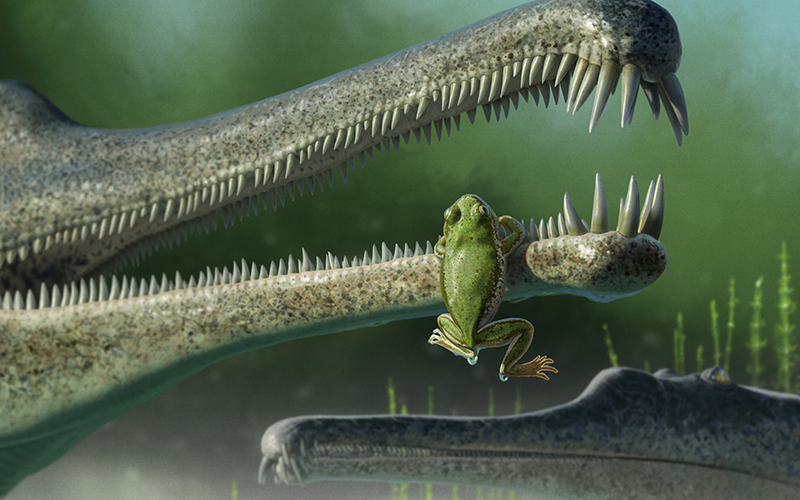 “Five years ago, we had no complete jaws known from the Triassic period of North America where we’re working,” Parker said. “And because of this new technique, we have over a hundred.”

The first discovery of Skybalonyx skapter was a claw the size of a peanut – “only 20 millimeters,” Jenkins said.

Drepanosaur fossils were not discovered until the 1980s and were not recognized as a distinct group until 1992, according to researchers at the University of California, Berkeley. The animals, which grew to the size of a house cat, looked like a combination of anteater and chameleon and were ecologically diverse – swimming, burrowing, gliding and living in trees.

The discovery offers a glimpse into what Arizona in the late Triassic period may have looked like. Parker said the region was tropical, similar to that of Costa Rica today.

“At the time when these rocks were deposited and these animals were alive, we were sitting about 7 degrees above the equator on the giant supercontinent Pangea,” Parker said.

After eons of shifts in the Earth’s crust, the park now sits about 35 degrees above the equator.

Parker said the U.S. National Parks are hotbeds for research as well as magnets for tourists.

“They’re natural labs and not only are there for people to visit and hike and enjoy, but there’s also a lot of research that goes on in national parks,” he said.