PHOENIX – A little luck and a lot of perseverance allowed Glendale native Michael McDowell to come away with an unlikely Daytona 500 victory early Monday morning, his first win in 358 NASCAR Cup Series races.

McDowell, 36, started racing in the Cup Series in 2008 and has bounced around from team to team over the years. And while his career has been trending upward with four top-10 finishes last season, the prospect of the journeyman winning the Daytona 500 was slim – to be generous.

BetMGM had the Front Row Motorsports driver at 100-1 odds at the start of the race, a gamble the sportsbook reported that no bettor put money on happening.

If they had only known.

“It’s just so hard to get in position and to do it and to get my first Cup win at Daytona, it’s unbelievable,” McDowell said. “I’m just so thankful for everybody that just has allowed me to do it. It’s not been an easy road and there’s been lots of years where I was wondering, ‘What the heck am I doing? And why am I doing it?’ I always knew that if you just kept grinding that one day everything will line up, and it’ll go right.”

McDowell grew up racing BMX bikes before transitioning to go-karts at the Phoenix Kart Racing Association. He also worked as an instructor at the Bondurant School of High Performance Driving from the late 1990s to the early 2000s. 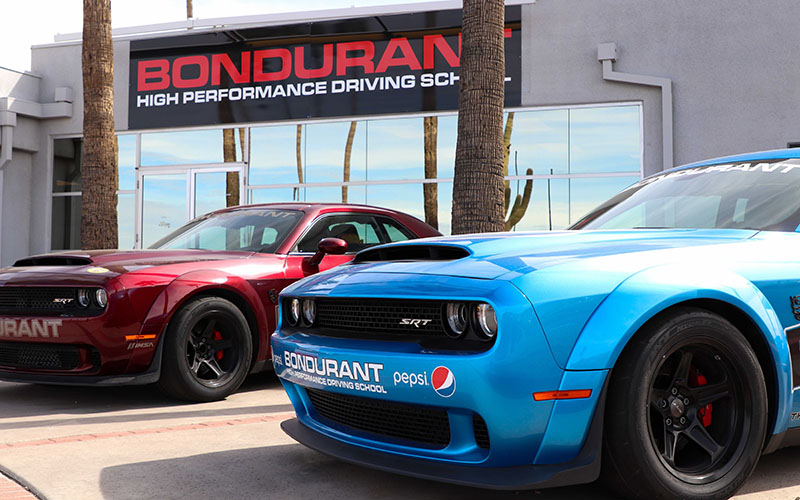 Before he was a Daytona 500 winner, McDowell worked at the Bondurant Racing School in Chandler. (Photo by Jessica Carnivale/Cronkite News)

One of the other instructors during McDowell’s time at Bondurant, Danny Bullock, who is now the director of operations at the school, was elated when he found out his old friend was the Daytona 500 champion.

As for Bullock’s memories of the Daytona 500 champion, he said they are fond ones.

“He was just the most genuine guy you could ever meet,” Bullock said. “Super friendly, very outgoing, which is the kind of personality you want for an instructor in this industry. He just exuded professionalism.”

Another Arizonan familiar with McDowell is former Arizona Republic motorsports writer Mark Armijo, who penned multiple stories about McDowell when he was coming up. He echoed Bullock, and said he remembers McDowell as a “very, very nice person.”

McDowell’s unlikely victory is a rarity in NASCAR. Drivers on low-budget teams typically scratch by while big-name, big-money organizations such as Team Penske and Hendrick Motorsports dominate the standings.

Which is why Armijo believes McDowell’s victory is good for the sport.

“It’s always great to get new faces in the winner’s circle,” Armijo said. “The New England Patriots … how many Super Bowls did they win? People naturally are going to get tired of seeing the same team in general all the time. I can see this only doing good things for NASCAR.”

The Daytona 500 is a superspeedway race and superspeedways are known for pack racing, and it often allows cars from smaller teams to run higher in a race than they normally would expect.

Superspeedways also are known for setting the stage for “The Big One” – massive crashes that typically occur near the end of the race.

On Sunday, there were two “big ones.” The first was on lap 14 of the “The Great American Race.” Somehow, McDowell made it through the crash, which reportedly involved 16 cars.

The second came on the final lap of the race when Brad Keselowski, running in second, bumped Joey Logano, the race leader, setting off a fiery, multiple-car crash. McDowell, running third at the time, slipped through the maelstrom and into the lead.

When the yellow flag was waved, signaling a caution, he was in first position and therefore declared the race winner.

Michael McDowell is the 7th driver in series history with 1 lap led in his first career win. 6 of those 7 have come at Daytona, and the other one was at Talladega.

McDowell’s crew chief, Drew Blickensderfer, cited his driver’s coachability as the reason the team was able to win the race.

“He knows at the end of the day that no matter what the spotter says to him, the owner or I say to him, it’s for the better good of the 34 car, and he doesn’t wear his ego on his sleeve,” Blickensderfer said. “Super humble guy. He’s fun to work with.

“The first half of the race I was frustrated with Michael … . I was ‘Hey, it’s a reset. Get your butt in gear and let’s get going and in the second half of the race.’ I couldn’t be any prouder, obviously.”