PHOENIX – Mike Hazen’s words came firmly. No hesitation, no reflection before answering the question. Nothing.

“We are extremely fortunate to have a superstar player that does what Ketel does,” the Arizona Diamondbacks general manager said.

The description of Ketel Marte might trigger some second-guessing. Superstar? The 27-year-old utility player was fine during the shortened 60-game 2020 season, when he batted 287/.323/.409 with two home runs and 17 RBI in 45 games played.

Before 2019, Marte’s highest career OPS+ was 102 – just above average. But that year, everything changed. Marte burst onto the scene with Arizona, slashing .329/.389/.592. He hit 32 home runs, a career-high mark that was more than double his previous total. He finished fourth in the National League MVP race, and was selected to his first career All-Star Game.

“The first time I saw him doing BP three days ago, it was impressive,” newly signed infielder Asdrubal Cabrera said. “He’s a guy determined to be a superstar.”

In 2021, the Diamondbacks are once again expecting big things and a rebound from 2020 out of Marte, and his presence and versatility are crucial to how Arizona could deploy its offense and defense. The former Seattle Mariners player can man second base, center field or even shortstop.

Marte was inserted almost solely at second base in 2020, but had 83 appearances there in 2019 compared to 96 in center field during his breakout 2019 season. The year before, he was on the dirt the majority of his innings.

“We are still understanding of whether Ketel is standing at second, short, center,” Hazen said. “That has a downstream effect on other guys and what they look like in the lineup.”

Manager Torey Lovullo said his roster does feature players who will be entrenched at one position, but left it open as to who exactly is where.

The Diamondbacks, Hazen said, build themselves around Marte. In a scenario with him at second, Arizona would figure to feature Nick Ahmed at shortstop, Christian Walker at first and Eduardo Escobar at the hot corner.

“Ketel is our best player,” Hazen said. “We are going to try to put Ketel in position to have the best season of his career like we will every year. To the degree that a defensive position has an impact on that, we will talk about consistently. I think he’s so good that it doesn’t matter.”

But the offseason signing of Cabrera could open up the opportunity for Marte to play center field more.

Cabrera was a shortstop throughout the majority of his career, but since 2019 has moved away from the six-hole and focused primarily on the other infield spots – with 25 appearances coming last year at first base with Washington and 31 at second base the year before.

“It’s tough to pick what position right now,” Cabrera said. “Any position they want me to play, I’m going to try my best. I always say, ‘To make (it) out, you have to catch the ball no matter what position to play.’”

Hazen said Arizona will attempt to put the best hitters on the field for each and every game, based on how the matchup speaks to Lovullo. 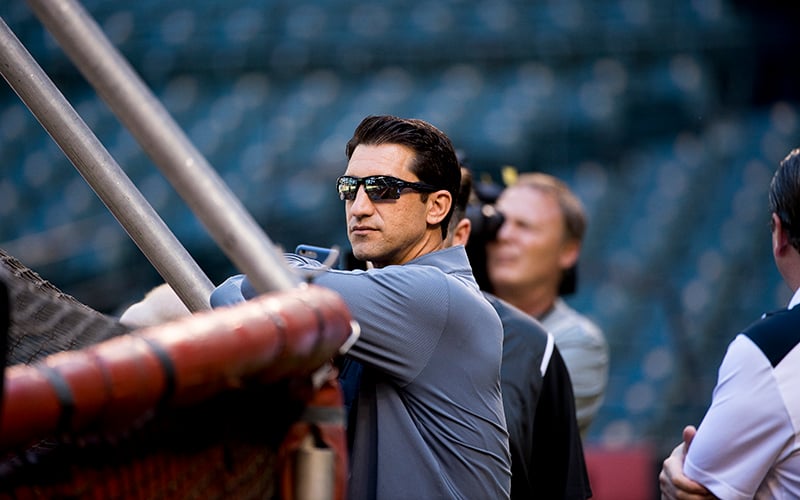 Diamondbacks general manager Mike Hazen said the team is “going to try to put Ketel in position to have the best season of his career like we will every year.” (Photo by Sarah Sachs/Arizona Diamondbacks/Getty Images)

“Having versatility on a roster enables me on a nightly basis to go out and attack that pitcher and that particular game plan,” Lovullo said.

“The other guys – I don’t know how many it will be – give me the ability to mix and match the best way I can to help us score as many runs as we can.”

If Marte follows his 2020 path and stays in the infield, it opens up holes in the outfield for Arizona.

Fan-favorite David Peralta and Kole Calhoun figured to man left and right field, respectively, but Calhoun had knee surgery on Wednesday and will be out 4-6 weeks, making Opening Day certainly in doubt for the former Angels player.

“We’ll see how it goes,” Calhoun said. “It’s going to be out how this thing responds within the next couple days swelling-wise.

Potentially an option to DH on days Arizona is playing in an American League ballpark (2020’s universal DH rule did not hold over after an agreement between MLB and the MLBPA), an absence of Calhoun in the lineup now leaves Arizona with two open outfield spots if and when Marte holds second.

“We saw Tim Locasto take some steps forward last year that we are very encouraged by,” Hazen said. “We believe strongly in the younger players that came up from our system last year (like) Josh Rojas, (Josh) Van Meter, Wyatt Mathisen, Andy Young that are all in competition.

“They all play certain positions around (the field) and getting them at-bats and figuring out what gives us the best chance to win that baseball game that night, and in this context, score the most runs – those are the variables that we’ll be talking about.”

Stuart Fairchild, Locastro and Rojas were all noted specifically as center field candidates by Hazen, as was Trayce Thompson. But a recent COVID-19 diagnosis for Locastro could affect his availability when the season opens.

“I had a chance to speak to Tim Locastro yesterday,” Lovullo said. “He’s obviously frustrated by what’s going on but he needs to spend the next eight-nine days healing up and making sure he’s ready to come back out here.”

Daulton Varsho, one of the team’s top prospects who made his major league debut last season, also could vary into the mix. Varsho spent almost two-thirds of his time last year in the outfield – primarily in center – rather than behind the plate.

“He handled himself very well last year,” Hazen said of Varsho, who struggled at the plate, hitting .188 in 37 games. “I still think his ability behind the plate was probably the biggest impressive takeaway I took from him last year, and that position is extremely difficult. He’ll be in the outfield, too.”

Lovullo said the 24-year-old has put in a lot of work since he was called up.

“(Varsho) came up to the big leagues and showed a tremendous amount of mental toughness,” he said. “He was grinding away at some early at-bats but things slowed down for him a little bit. He had some success in simplifying his approach at the plate and getting grounded on defense. We want that to continue. We want that type of at-bat to continue and I know he’s worked on some things this offseason that are going to help him be more productive and less predictable as a hitter.”

Hazen is keeping his mind wide for potential hole-fillers, though, as he said the team sees Varsho primarily as a catcher.

“After (Locastro and Fairchild), I think it thins out on us a little bit,” Hazen said. “It’s probably an area that we need to keep our eyes open for ways to strengthen. You start getting down into the depth charts with who you could add without putting them on the team right away. It’s an area we need to continue to lock in on.”

Regardless of where the Diamondbacks position Marte, Hazen and Lovullo are confident that he will respond well, mostly because he’ll have a say.

“Whatever is going to make those alignments work best for the team, he has always told us, ‘That is what I want,” Hazen said. “We’ll sit down with him.

“I imagine he is going to play and hopes to play multiple positions.”

Lovullo said it’s imperative that Marte is keyed on the discussion.

“We have to be fair to Ketel and we need to have these conversations and come up with a plan so we can allow Ketel to understand that and absorb that,” he said. “It’s the fairest way to do with a player that we are asking so much of. We want to do everything we possibly can to get Ketel to be the best version of himself.”

The rampant versatility up and down the lineup is also being employed on the mound. Arizona has four starting pitchers likely locked down in Madison Bumgarner, Zac Gallen, Luke Weaver and Merill Kelly. But struggles from the newly-signed Bumgarner and Weaver in 2020, coupled with an offseason surgery from Kelly, could result in Arizona needing more arms – for depth or for innings.

Like the lineup, the Diamondbacks’s rotation has options. Corbin Martin, one of the prospects received from Houston in the Zack Greinke trade in 2019, is a “full-go” after Tommy John surgery. Hazen says the team views him as a starter, but won’t rule anything out. Alex Young posted a 3.57 ERA in 2019 as a rookie, but had that number shoot up to 5.44 in seven starts last year. Caleb Smith was acquired from Miami during the 2020 season, and pitched to the tune of a 2.45 ERA in three starts as a Diamondback last year.

Arizona also can dip into more depth if it wants with players at the Triple-A level. That strategy was used last year when dealing with the 24th ranked bullpen in baseball, according to fWAR.

“The high minors guy that have pitched as starters – we are going to stretch them out to the degree that we can to protect us either starting pitching wise if they end up on our team as a starter, in Reno as a starter, or in our bullpen as a long guy or as a stretch variety,” Hazen said.

Arizona’s relatively quiet offseason featured multiple moves to help ensure the bullpen – the Diamondbacks signed relievers Joakim Soria, Chris Devenski, Tyler Clippard, Heath Filmyer and Anthony Swarzak to either season-long deals or spring training contracts. But Hazen keyed in on J.B. Bukauskas, another prospect received in the Greinke deal who has not yet thrown a major league pitch.

“Bukauskas is probably the guy we’re making a bit of an adjustment to for this spring training as we’re going to ask him to compete in shorter stints for right now,” Hazen said.

“What I’m seeing is an unbelievable fastball with two secondary pitches that are falling right out of the same place,” he said of Bukauskas. “Everyone wants to know if he’s going to be a starter or a reliever – I’m sure that will be determined. What we know is that he has the stuff to get big outs at any time and we love that part of him.”

Whether all of the shuffling cards in all departments turns into wins remains to be seen. The Diamondbacks haven’t made the postseason since 2017, and their win percentage hovered just above .500 until 2020’s fall-off. But at the end of it, Arizona’s versatility is a strength in the minds of its leadership, and one player is responsible.

“It starts with Ketel,” Hazen said.