PHOENIX – Although it is not sanctioned by the Arizona Interscholastic Association, high school hockey has a foothold in the desert.

“Obviously we are not a hockey state,” said David Hines, the executive director of the AIA, the governing body of high school sports in Arizona.

Maybe not now, but it’s changing.

In the 2016 NHL Draft, Auston Matthews, who played in Arizona youth leagues, was the No. 1 pick by the Toronto Maple Leafs. Three years later, Hamilton High School goaltender Guy Blessing signed with Omaha of the USHL.

Blessing was a product of the Arizona High School Hockey Association, an organization that has helped the sport thrive in the state.

Since 1999, the AHSHA, sanctioned by USA Hockey, has been the only high school hockey league in Arizona. Its mission is not only to provide high school students with a high caliber hockey program, but to bring awareness and respect to the sport at a high school level.

Which is not always easy in the desert.

“In some of the more traditional hockey states, Minnesota, Michigan or Massachusetts, hockey is one of the core sports of a high school,” said Kenny McGinley, AHSHA president. “Those states have hundreds of years of high school hockey lineage. We have less than 25.”

Why isn’t it sanctioned by the AIA? There is no singular reason but lack of ice, coaches and participation were all mentioned by Hines.

To join the AIA, an emerging sport must undergo a trial period of three to five years before it becomes an officially recognized sport with a state tournament, the organization said.

In an area that does not have a large hockey market even at the professional level – Coyotes’ fans are loyal if not immense – growing a high school hockey league could be a challenge.

But over the past two decades the league has managed to plant its roots.

AHSHA has an average of 30 teams per season which, according to league rules, must consist of 15-18 skaters plus two goaltenders. The league has four different divisions, providing opportunities for student athletes at all different levels.

“We have something for everybody in a safe, fun environment,” said Lauri Griebel, AHSHA secretary and administrative support. “Whether you’re brand new to skating, you caught the bug when you were at a championship game and you’re wanting to give it a try, or you’ve been playing hockey your entire life.”

Most of the athletes in a higher division have played some form of club hockey at some level. “As you go down to our JV level, we have kids who put on skates for the first time a couple of years ago,” McGinley said.

And AHSHA has a track record of players who have gone on to play at the next level, whether it’s with the American Collegiate Hockey Association or in another junior hockey league. 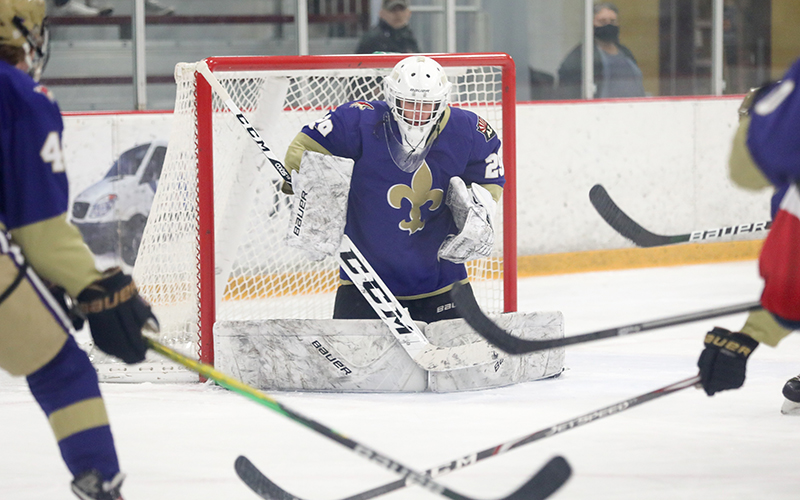 The AHSHA takes a team of 20 juniors and seniors, selected from teams across the league, to a USA Hockey tournament that is held in St. Louis each year so players can be seen by scouts. (Photo by Alina Nelson/Cronkite News)

“It’s one of our goals,” McGinley said. “To send as many of our kids as we can on to play at a higher level.”

A big part of achieving this goal is AHSHA’s showcase and premier teams.

“If you want to play hockey at a higher level, you need to be seen by scouts,” said Tait Green, former AHSHA hockey director and board member.

So every year AHSHA takes a team of 20 juniors and seniors, selected from teams across the league, to a USA Hockey tournament that is held in St. Louis.

The tournament is for hockey players who play in markets where they generally would not be seen by scouts. Arizona is a prime example.

“The kids get a week of playing other kids their same age, in front of junior scouts, college scouts, etc.” said Green, who has been involved with the showcase team since he joined AHSHA a decade ago.

While taking Arizona teams to the St. Louis tournament, Green and his colleagues came up with the idea of starting something they called the premier team.

“It is a way to groom the kids for a showcase,” Green said. “It is an inexpensive way for high school kids to play more competitive hockey.”

Green describes premier as a hybrid between AHSHA and club hockey. It is not as expensive, or as big of a time commitment, as playing club hockey, but it costs a little more than AHSHA’s other teams.

It’s another tool that helps kids get to the next level.

While AHSHA’s number of participants has exploded in the past couple decades, the organization has also been able to build its relationships with local high schools.

When the league first started, there was no acknowledgement of teams by their respective schools.

“That’s changed a lot in the past 10 years,” McGinley said.

“Hamiliton is probably the most accepting of their hockey team. They hang banners in their cafeteria, and they really support their team,” he said of the Chandler-based high school.

But as long as the sport is not sanctioned by the AIA, it is difficult for high school hockey to receive the same support that other high school sports receive.

It’s an obstacle that AHSHA strives to overcome.

“We had a high school assistant athletic director attend our championship game this year, and he was extremely supportive of it,” McGinley said. “That’s a huge step forward for our league.”

But it isn’t just school support that has helped stimulate the league.

“The NHL and NHLPA have a program called the industry growth fund,” said Matt Shott, senior director of hockey development for the Arizona Coyotes and an AHSHA board member. “It’s a grant process that helps enhance the hockey development in the market.”

Shott was awarded the grant to provide high school hockey in Arizona with financial support for three years, beginning in 2017.

“We were really able to grow our league with that assistance,” McGinley said.

The money, officials said, went towards helping increase the reputation of the league, getting more ice time and updating the uniforms.

Now, all of the jerseys have the Coyotes logo on the shoulder.

Having the support of an NHL team has helped AHSHA with its presence in the community.

“We still try to work with the Coyotes in any way that we can,” McGinley said.

So while a frozen pond in the middle of the desert may seem unlikely, high school hockey in Arizona is a growing market that is making a name for itself.