TEMPE – The Arizona Coyotes are one step closer to finding a new home.

On Tuesday night, the City Council voted unanimously (7-0) to support a public referendum taking place on May 16, 2023 regarding the Coyotes’ proposed arena and entertainment district in Tempe at Rio Salado Parkway and Priest Drive.

“This was a great night,” said Xavier A. Gutierrez, Coyotes president and CEO. “The Arizona Coyotes and the Meruelo family (the team’s majority owner) are deeply thankful to the Tempe City Council for their unanimous support and cannot wait to move forward on this transformational development.”

This project is projected to cost $2.1 billion, which would be one of the largest property developments in Arizona’s history. A common concern when a venue of this magnitude is proposed is how it will affect the residents of the city and whether taxes will skyrocket. However, the project is privately-funded and won’t cost residents a dime.

“It’s a private-funded project and the club’s prepared to execute a 30-year, non-relocation agreement,” said Gary Bettman, the NHL commissioner who flew to the Valley specifically to voice support for the Coyotes at the meeting. “All the things that say this club wants to be here, and frankly, the NHL wants the club to be here.”

It wasn’t a positive night for all parties involved. There were a few opponents of the move at Tuesday’s meeting, with most citing concerns revolving around the team’s ability to pay its bills.

“The past is prologue,” one Arizona resident said at the city council meeting. “The leopard will not change his spots. The scorpion will sting the frog because it’s his nature. Those who do not learn from history are doomed to repeat it. Glendale’s history for example.”

Last December, Glendale City Manager Kevin Phelps informed the Coyotes that they owed $1.3 million, including the $250,000 they needed to pay the city. The Coyotes faced eviction from Gila River Arena if the debts were not paid and officially ended their partnership with Glendale after the end of the 2021-22 season.

The proposed arena is expected to have a capacity of 16,000, which is 11,000 more people than the Coyotes’ current home at ASU’s Mullett Arena. The entertainment district will include a practice rink for the Coyotes, a restaurant row, a retail center, two hotels, a private medical office campus,1,995 residential units and a 3,500-person theater. 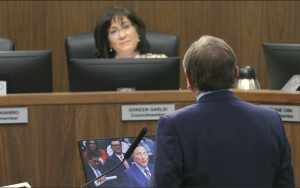 NHL commissioner Gary Bettman few to the Valley to show support for the Arizona Coyotes’ proposed arena. “The NHL wants the club to be here,” he said Tuesday. (Screen grab via Cronkite News video)

“I mean every other stadium or arena throughout the state of Arizona has property tax abatements that are in perpetuity, right?” Tempe mayor Corey Woods said. “The current arenas that have already been built are never going to pay any property taxes back to any of those jurisdictions. This one will. That alone by itself sets it apart from every other stadium facility deal that’s ever been done by the state.”

While the construction of the entertainment district has not officially been granted permission to start, the potential for the Coyotes is endless if they were to eventually move into the new arena.

“If we can take a landfill and make it a landmark in Tempe, we have a chance to become an elite NHL franchise right here in the city,” Coyotes general manager Bill Armtsrong said.

A state-of-the-art arena could give a spark to a team that has struggled to win games over the past couple of years. It could also mark a fresh chapter for the franchise.

Every championship team needs a strong culture. An entertainment district centered around the team, coupled with an up-and-coming young core of players, can help rebuild the franchise’s image and create an exciting culture that fans can get behind.

“My belief is if you can see it, you have a chance to be covered,” Armstrong said. “If we look at one of the premier teams in our league, it is Tampa Bay. Tampa Bay has a lot of similarities to where we sit today … They are two-time Stanley Cup winners. They are similar to us in the sense that they were built through the draft. They’ve got warm weather, they’ve got good taxes. And they’ve got a beautiful rink, surrounded by an entertainment district with hotels, restaurants and condos.”

Bettman and the NHL are confident that hockey will continue to grow and prosper in Arizona. Bettman was enthusiastic about the Coyotes’ future plans and said he would love to host NHL All-Star games and drafts in Tempe.

The Coyotes always seem to be on the move. Since the team relocated to Arizona from Winnipeg in 1996, the Coyotes have played in Phoenix, Glendale and now Tempe.

Finally, they may have a stable spot at Rio Salado Parkway and Priest Drive, a place they could call home for years to come.

About Cronkite News 4049 Articles
Cronkite News is the news division of Arizona PBS. The daily news products are produced by the Walter Cronkite School of Journalism and Mass Communication at Arizona State University.