SANTA MONICA, Calif. – If its organizers have their way, a new sport could be coming in time for the 2028 Olympic Games in Los Angeles.

It’s called teqball, a cross between soccer and pingpong – as unlikely a combination as that sounds. Although little known in the U.S., teqball has attracted about 5,000 players in 100 countries, the International Teqball Federation in Budapest says.

The sport is played on what looks like a slightly arched pingpong table, with a clear barrier in the middle where a net normally would be. But the similarity to table tennis mostly ends there.

There’s no little hard, white plastic ball. Instead, players rally a full size soccer ball back and forth. Like volleyball, they can contact the ball a maximum of three times before it must be lofted over the barrier onto the opponent’s side of the table.

Players – known as teqqers – lose the point if the ball hits the ground or they miss the opponent’s side of the table on a return.

“Ninety percent of the players that come into teqball will be from soccer,” said Mark Millan, who plays teqball and is a play-by-play commentator for ESPN’s teqball coverage. “Once you start playing this game, you’re going to realize that the touches are similar to soccer, but you’re playing a very different game.”

A game consists of three sets of 12 points each. As in tennis, teggers also get two chances to complete a serve.

Teqball can be played inside or outdoors, whether it’s in the confines of a soccer venue or overlooking the beach in Santa Monica, where tables are set up near the bike path, a popular destination for locals and tourists alike.

Teqqers put on quite a show on a recent Friday, sometimes standing back 10 feet from the table and maneuvering the ball as if they were putting on a hands-free juggling act, with dramatic airborne kicks, headers and shoulder taps before pinpointing the ball on a target space smaller than a poker table.

“We play almost every day in front of one of the most populated beaches in Los Angeles,” Millan said. 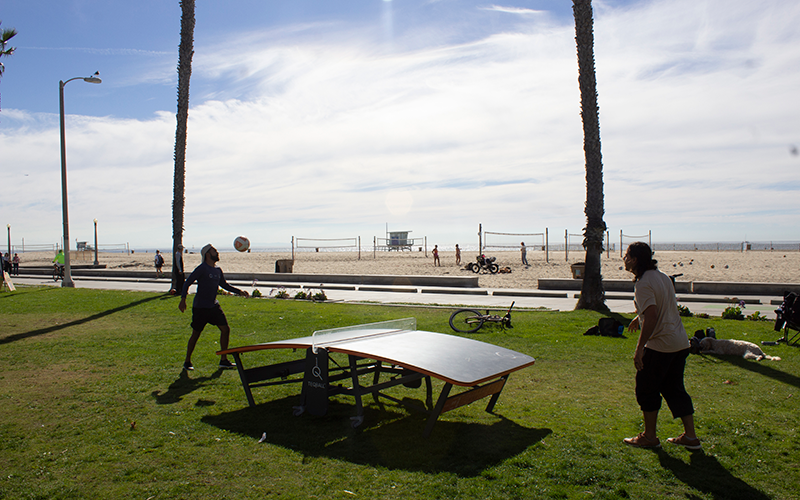 Teqball is one of several sports that can be played on the arched table, said Ajay Nowosu, CEO of Teqball USA and president of the U.S. National Teqball Federation, who has been at the forefront of promoting the sport. Others are versions of pingpong, volleyball and tennis.

“Teqball is the one we took to the global level,” said Nowosu, adding that the organization is “pushing it to be an Olympic sport.”

Teqball is billed as a sport without limits by gender or age. Doubles and singles games are available, and it can be picked up by first-timers while still appealing to those who want to compete professionally. Even a few celebrities have given it a go, including soccer legend David Beckham and singer Justin Beiber.

“One of the world champions for teqball comes from a karate background,” Nowosu said, “and we have different people from different backgrounds that didn’t play soccer at a high level but have become major athletes in the teqball world and ecosystem.”

For those willing to put in practice time, he said, “there are such few sports where you’ll see success in such a short time playing it.”

Teqball also is expected to make an appearance at the FIFA World Cup games, now underway in Qatar, for training purposes and for fun, Nowosu said, with several national teams adopting the sport.

ESPN signed a programming deal with Teqball USA earlier this year for six televised highlight shows throughout the season, with four featured on ESPN2 and two on ESPNU. In addition, 12 teqball tour events through this year are being streamed live on ESPN3.

Nowosu said teqball has been added as a medal sport for the 2023 European Games in Krakow, Poland, and for the African Beach Games and the Asian Beach Games.

The next live teqball event in Los Angeles will be Jan. 28 and 29 in Santa Monica.

About Cronkite News 4049 Articles
Cronkite News is the news division of Arizona PBS. The daily news products are produced by the Walter Cronkite School of Journalism and Mass Communication at Arizona State University.