PHOENIX – The COVID-19 pandemic has stalled sports across the planet, causing cancellations, postponements or shortened seasons.

But a few weeks ago, the Arizona Interscholastic Association approved its Sports Medicine Advisory Committee’s (SMAC) plan to return to fall sports, and now many schools across the state are preparing to play ball.

While high school associations in some other states elected to cancel all of their fall high school sports seasons, the majority of varsity football teams in Arizona will kick off Friday, giving programs like the powerhouse Chandler Wolves and other champions across the AIA’s conferences the opportunity to defend their state titles.

The Wolves come into the 2020 season ranked No. 7 nationally by Max Preps following an undefeated 2019 season that Chandler capped off by beating Saguaro, 42-35, in the first Open Division State Championship.

The Wolves have several key players returning, including some that expect to continue their football careers in college. That group includes outside linebacker Brandon Buckner, who is committed to Oregon.

Buckner is thankful for the chance to play his final high school season.

“I feel like it’s pretty important, just solidifying and seeing all my four years of coming through Chandler,” Buckner said. “Just putting the icing on the cake, just playing well (in the) last season with my friends, just going out and getting another championship, and just accomplishing our goals and expectations that we have for this year.”

Chandler coach Rick Garretson echoed Buckner’s expectations and said he isn’t concerned about his players’ conditioning or additional vulnerability to injury due to the cancellation of spring football amid the pandemic’s early stages.

Chandler coach Rick Garretson is excited about the season and said he isn’t concerned about his players’ conditioning, despite the pandemic. (Photo by Kevin Hurley/Cronkite News)

“I definitely like where we’re at with our foundation. If you don’t have that in the sport, it’s a problem. While there are other aspects of spring football, like we haven’t (practiced) the red zone (plays inside the opponent’s 20-yard-line) yet. There are some things you’ve got to give and take. But as far as the conditioning and their foundation, it hasn’t affected that. As a matter of fact, in a certain sense, it’s kind of helped.”

The Wolves are considered a heavy favorite to take home another state title and realize the lofty expectations Buckner and Garretson have for this delayed season. They are expectations that come with every season at Chandler, a program that has produced several NFL players including Cardinals reserve quarterback Brett Hundley, Saints defensive end Cameron Jordan, Rams quarterback Bryce Perkins and Patriots wide receiver N’Keal Harry.

Among the teams expected to challenge the Wolves is westside power Centennial High. The Coyotes finished 9-2 in 2019, with their only losses to California heavyweight Mater Dei and in the state quarterfinals.

Coach Richard Taylor has been the football coach for a long time at Centennial’s football factory in Peoria, and his goal this year is no different than previous years. For Taylor, it’s simple and it never changes.

“We always have very high expectations,” Taylor said. “The last 15 years, (the goal) has been to win the state championship.”

Centennial only has eight games on its abbreviated regular-season schedule due to the COVID-19 outbreak. It includes a rematch on the road at Hamilton in the season-opening game and another “freedom” – or non-region – matchup at home against Chandler.

Centennial will quickly find out how good their chances are at winning state. Their brutal schedule includes regional games at home against perennial contenders Pinnacle, Chaparral and Brophy Prep. But Taylor remains confident in his team, and also has confidence in how the program has adjusted to COVID-19 protocols.

“Well, I think we’ve done the best we could have,” Taylor said. “We followed our district guidelines. We’ve got in as much work as we can. And sometimes, I would say that I feel pretty far behind because we didn’t have spring (football); we didn’t have seven-on-seven (tournaments). But in most cases, the other schools didn’t have that, either.”

Taylor has a long list of players he expects big things from this season, offensively and defensively. But there is one name on the list that deserves to be underscored, based on what he accomplished in 2019 – two-way standout DJ Gleash, a defensive end and tight end.

“DJ Gleash at tight end, I think is going to do very well,” Taylor said.

“Personally, my goal is to see my team hold up the golden ball (the 6A state championship trophy),” Gleash said.

Gleash added that he will consider playing his college ball anywhere that offers him a scholarship. So far, he has offers from Drake, Valparaiso and Division 2 Northern State in North Dakota.

Gleash and his teammates have tried to adjust to the restrictions that come with a global pandemic, and he said they’re ready to play.

“We’ve been acclimated to it, we are working a lot on Hudl,” Gleash said, referring to the football video sharing and analysis app. “We’ve been watching Hudl. And our coaches have been doing a great job in practice with implementing game-type situations. We’ve been working on everything and we’re going to be ready to go.” 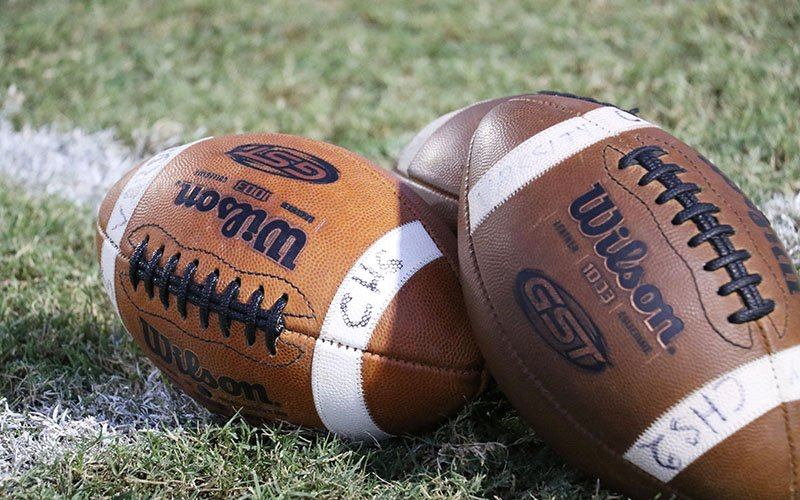 The Hamilton Huskies, the team that defeated Centennial in the state quarterfinals and Chandler’s arch rival, is coming off an 8-2 season that ended in the state semifinals against the Saguaro Sabercats. Coach Michael Zdebski believes this year’s team is completely different.

“Last year’s team did get us closer to where Hamilton should be in high school football in Arizona,” Zdebski said. “This year’s team, for the circumstances, worked extremely hard. We began in the weight room in December, doing it all the way through the month of March. And then when things got shut down, I think our kids and coaches worked excessively hard in April and May when there was a lot of doubt if there was going to be football. And then when we actually got to get back out on the field in June, our players and coaches worked excessively hard, hoping that we would see July.”

Even through the postponements, Zdebski believes his players and coaches stayed focused and prepared as if they would get the opportunity to play this season. Zdebski is well aware of the small margin for error due to the shortened season, and he wants his team to stay focused on each game at a time.

“Each individual has to do their job, and you’ve really just got to have a short memory and focus on one game at a time,” Zdebski said. “If you look too far ahead and you start reading press clippings, you tend to not play in the moment. And as long as we can play in the moment, each individual plays up to their ability and the best that they can within themselves. And that’s all we want.”

Zdebski wants his team to improve on a daily and weekly basis. Everything else will take care of itself if his players remain committed, he said. And he has high expectations for his kickers.

“I think the three key players for our team are Darin Jackson, Roch Cholowksy and Jacob Medina,” Zdebski said. “Those three (players) handle our kicking duties. That’s the key to our season.”