A University of Arizona professor, Dr. Sonja Lanehart, who claims to be an advocate for “equity and inclusion,” has gained national media attention for her apparent unwillingness to include all in a dialogue. Lanehart is the subject of an article on the popular CampusReform.com website due to comments linking white evangelicals to white supremacy.

“White evangelical members would deny Jesus if its leaders spoke out against 45 before they would admit that 45 is a white supremacist and that is the cause for which he most represents,” she said according to CampusReform.com. “It’s not sanctity if [sic] life. It’s not law and justice. It’s all about white supremacy.”

White evangelical members would deny Jesus if its leaders spoke out against 45 before they would admit that 45 is a white supremacist and that is the cause for which he most represents. It’s not sanctity if life. It’s not law and justice. It’s all about white supremacy.

In a tweet date, November 16, Lanehart tweeted out an article from Huffpo article entitled, No, I Will Not Be ‘Reaching Out’ To Trump Voters, Now Or Ever. Here’s Why.

It would be hard to imagine how a student right-leaning political views would feel welcome in her classroom.

As noted in the CampusReform.com article, Lanehart states on her website that her scholarship “focuses on language, literacy, and education in African American communities; language and identity; sociolinguistics and language variation; and Black education from Black feminist and Critical Race Theory perspectives.”

The author of the article points to an interview Lanehart had with KOLD in which she sated that her motto is “Words Matter.”

If the plain meaning of words matter to Lanehart, one would have to assume that the words she uses in her tweets matter as well.

In one tweet, the professor professed that Trump “keeps finding a lower low,” in reference to his announcement of an Executive Order establishing the President’s Advisory 1776 Commission. The Commission is tasked with improving the “understanding of the history and the principles of the founding of the United States among our Nation’s rising generations.”

Lanehart taught at the University of Texas at San Antonio until recently. There she earned poor marks on RateMyProfessor.com: 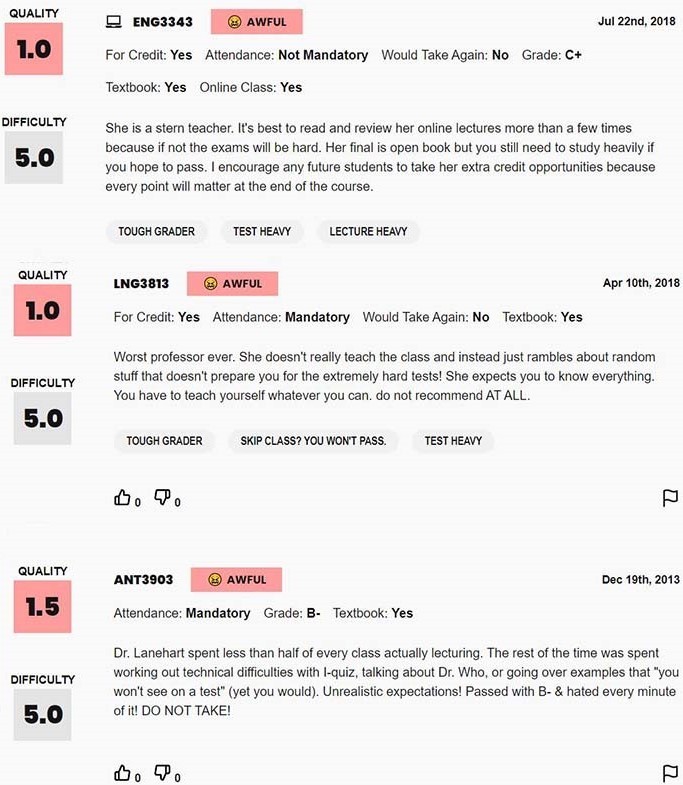 According to a through review of the University of Arizona class schedules, Lanehart does not appear to have a teaching history in Arizona. She is scheduled to teach LING528 Language Use in African American Communities beginning March 1, 2021.