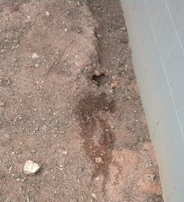 On March 22, the chief of staff of Tucson city councilman, Paul Cunningham, was arrested after being verbally abusive to police and physically aggressive towards one of her employees, who came to drive the drunk woman home. At the time of her arrest, the high ranking city employee gave the assisting officers the impression that she felt that laws against public intoxication and jaywalking were not applicable to people of her stature.

As a courtesy, officers offered to give the City VIP a ride home and were not going to cite her despite the fact that the first officer on the scene was on the scene because she had stepped out into the street causing him to take “evasive maneuvers” to avoid hitting her, according to a Tucson tabloid.

However TPD spokesperson Chris Widmer, told the Arizona Daily Independent that officers on the scene advised Bolger that she was going to be cited and released and they offered her a ride home. (updated 4/3/13)

To that courtesy she responded, that they worked for her and that they needed to call the Chief of Police “just for the f— of it.”

Only after being physically aggressive to an underling City of Tucson employee, and refusing to sign the citation for jaywalking, was she finally arrested and transported to the Pima County Jail.

Just prior to her arrest she urged her employee to record the police intervention “to make a point.” However, the point not lost on the public was that only after the most belligerent behavior, will those in the upper echelons of Tucson government be held accountable for their actions.

Which is why, the stunned witness did not call about an incident on Saturday morning at approximately 10:00 a.m., when Tucson City Councilman Steve Kozachik publically urinated in front of them while they tried to enjoy the urban outdoors.

The City Councilman, an avid runner, stopped and urinated against a wall outside of Gabby Gifford’s new neighborhood in full view of stunned passersby.

Kozachik was seen moments later, at approximately 10:16 a.m. near the Starbucks at El Con mall.

Witnesses had considered calling law enforcement for the public indecency, but feared retaliation. The Councilman is well-known for his angry temperament and with the mismanagement of the City budget it was unlikely, in their estimation that the cops could come any way.

In 2010, an Arizona appellate court ruled upheld the constitutionality of Tucson’s ordinance against urinating in public. A man had appealed his Pima County Superior Court conviction and one year probation term, arguing that the ordinance was unconstitutionally vague because it did not define “public place” or “exposed to public view.”

The man was arrested in July 2008 by a police officer who saw him urinating in an alley behind a store.

The Court of Appeals upheld the ordinance, saying it was sufficiently clear for a person to know what is prohibited.

Kozachik, a recently converted Democrat is acting like many converts and taking his new found ideology to extremes by proposing any and every restriction on gun ownership and nearly every other facet of people’s lives. Not to be outdone, McClusky announced this week that he is offering $100 one-shot shotguns to Tucsonans for free who live in what he calls, “high-crime areas.”

McClusky says his shotgun give-away is a response in part to Kozachik’s gun buyback program.

This year, Kozachik has worked to gain as much publicity as possible and pass many restrictive ordinances as he can upon the residents of Tucson. Gun ownership, liquor licenses, and texting have been primary targets of the puritanical nanny state council.

However, Kozachik is proud of the fact that he “protected” residents’ access to plastic grocery bags. The bags were the subject of a proposed ban by the previously mentioned drunk Councilman and others on the City Council.

“Some call it the ‘Tucson way’ and others call it B.S.,” said one native Tucsonan. “I call it B.S,. There is a double-standard here and people are getting sick of it. These city clowncil folks and their cronies are starving us with their boycotts, bans, and bullshit.”

One Tucsonan said of Kozachik’s lack of public decency, “He wants to regulate every part of our lives, but he can’t regulate his own bladder? God forbid, his need to pee was not caused by a 32 ounce Big Gulp, because we know what would be coming next.”

Editor’s note: The timing of this article is not lost on us. We wish it was an April’s fool joke, it is not. A member of TPD contacted the AZDI on 4/2/13 to clarify that the TPD intended to cite the City employee whether or not she accepted the courtesy ride home, this story has been updated.

Mask Requirements Cause Confusion As Some Orders Suspended or Rescinded