“No amount of experimentation can ever prove me right; a single experiment can prove me wrong.”– Albert Einstein

Climate is very complex, so complex that we really don’t know what we don’t know about climate. Most climate models, and political policy, are based upon the assumption that our carbon dioxide emissions are the major driver of global temperature. Observations versus model predictions shows that the assumption is wrong.

Dr. Roy Spencer and Dr. John Christy have publisheda graph comparing the predictions of 73 climate models versus the observations of radiosondes and satellites for tropical mid-troposphere global temperatures. This is a more accurate gauge of temperature than land-based thermometers which may be subject to many kinds of bias, mainly siting problems. On the graph below, the “spaghetti” are the model predictions and the heavy black line is the average of the models. Actual observed temperature measurements from four balloon-borne radiosonde data sets and two satellite data sets are show to be lower than even the lowest model prediction since 1998 and lower than the average model prediction since 1979. Spencer writes, ” the models and observations have been plotted so that their respective 1979-2012 trend lines all intersect in 1979, which we believe is the most meaningful way to simultaneously plot the models’ results for comparison to the observations.” 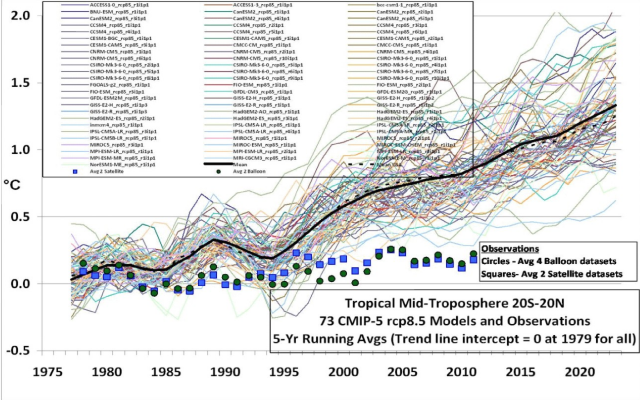 It is obvious from the graph that model predictions diverge markedly from reality. Why? The models are programed with a false assumption, namely, that carbon dioxide is a major driver of global temperature. That hypothesis further assumes that as carbon dioxide warms the atmosphere, more water will evaporate (water vapor is a much stronger greenhouse gas), thereby producing “an enhanced greenhouse effect” i.e., a strong positive feedback. It appears however, that the feedback is very small and perhaps negative. The models are wrong, probably because water vapor has a net negative feedback: clouds reflect sunlight and water vapor removes heat by convection. NASA says that even carbon dioxide can act as a coolant at the top of the atmosphere. In fact, a new paper finds that water vapor has a cooling effect and almost completely offsets any warming effect of carbon dioxide, ozone, and methane.

We see also that although atmospheric carbon dioxide has been rising, global relative humidity and specific humidity have been decreasing according to data from the NOAA Earth System Research Laboratory(see graphs below). That, too, contradicts the modeling assumption. Relative humidity is the percentage of water vapor in the air relative to the maximum possible water content at a specific temperature. Specific humidity is the ratio of water vapor to dry air in a particular mass. See here for a more detailed explanation. 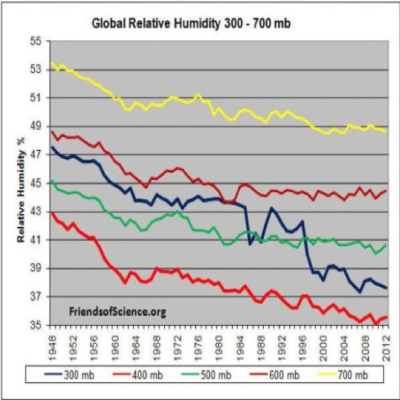 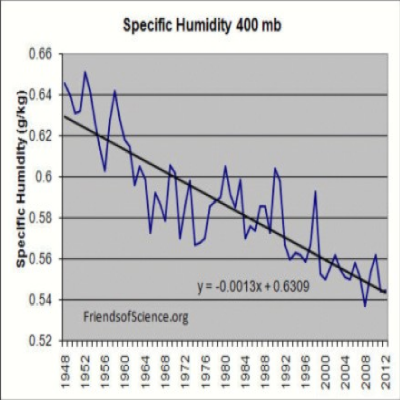 The models are wrong because of wrong assumptions. Unfortunately, much government policy and spending billions of dollars are based on these faulty assumptions.

Meteorologist Joseph D’Aleo has a good post with many graphs showing the current situation. Referring to proponents of anthropogenic global warming, he writes, “By claiming both sides of every weather extreme (warm or cold, drought or flood, no now or too much snow), they have created an unfalsifiable hypothesis.”

“The tropical heat build-up in the atmosphere and oceans, one of the key outputs in ALL the climate models, has not been seen in the weather balloon, satellite data, or the dense ocean buoys used to track El Nino and La Ninas down to 300 meters depth, in the last 3 to 5 decades or 2000m in the ARGO buoy data since its implementation in 2004.”

A paper in Science, the journal of the American Association for the Advancement of Science says that models fail because they do not provide “an adequate description of basic processes like cloud formation, moist convection, and [air] mixing.”