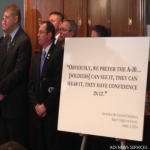 CD2 Candidate and Chief Master Sergeant (Ret) Chuck Wooten is co-hosting with Lt. Col. (Ret) Tom Norris, two town hall meetings to discuss the current status of the A-10 Thunderbolt II aircraft and the Air Force’s proposal to trim its budget by eliminating the entire fleet.

Lt. Col. Tom Norris has reached nearly legendary status in the Air Force and among troops on the ground for his flying ability and has become a strong voice in the fight for the Warthog (A-10). Wooten first came into the public spotlight when he challenged Congressman Paul Ryan’s budget deal that would have severely cut retirement benefits for veterans.

As a result of his willingness to challenge the GOP establishment, Wooten, now a business owner in Southern Arizona, received many requests from veterans to run for Congress in CD2.

According to a statement issued by Wooten, the A-10 is the battle-proven, inexpensive stalwart of Close Air Support missions and is directly credited with saving countless lives on the battlefield as well as being a key destructive force to enemy heavy armor and bunker positions.

Wooten and Norris attended a hearing last month on Capitol Hill of the Senate Armed Services Committee. The controversy surrounding the fate of the A-10 has been hotly debated on Capitol Hill in both the House and Senate. Wooten and Norris hope to bring to residents the information they learned on that trip by providing a first-hand account of the issues and current status of the A-10.

The two town hall meetings will also focus on what, if any implications there may be for the future of Davis-Monthan Air Force Base’s viability, should the A-10 be eliminated.

Sessions at the following times and locations: