On April 1, representatives with the RTA, the City of Tucson and Pima County participated in ribbon cutting and the basic installation of the public art piece known as The Cocoon. Fans of the piece emphasized the fact that the definition of cocoon is “to envelop or surround in a protective or comforting way.“. 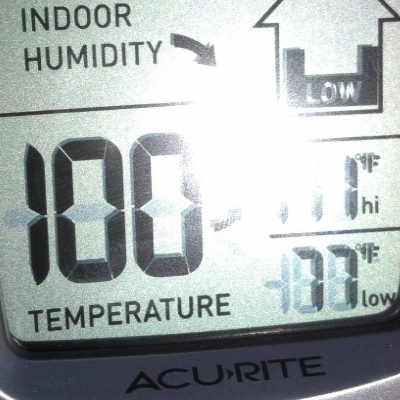 Just how protective and comforting the structure is recently became a subject of debate. Many questioned how a metal structure could provide comfort in Arizona’s scorching summers. As a result, the Arizona Daily Independent sent a team out to investigate.

On Sunday June 22, 2014 at approximately 3 p.m. the measured 100 degrees approximately 50 feet south of the “protective cocoon” according to a hand held thermometer.

The second measurement was taken at 3:11:37 p.m. inside the center of the “protective cocoon” which was empty, and judging from the lack of foot prints in the trail that passes through the “protective cocoon,” is not an uncommon condition. The thermometer quickly registered a temperature of 104 degrees (as indicated in the picture).

It is no wonder that after the installation, joggers, bicyclists, and drivers stared in amazement as they came upon the multi-pipe sculpture, now known as the tunnel to nowhere. The tunnel-like structure sits next to the paved pedestrian path alongside a newly widened portion of Houghton Road. 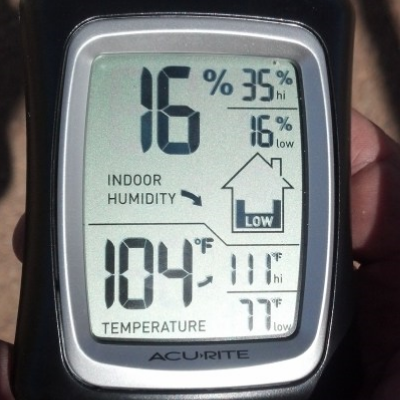 The $200,000 plus weave of metal pipes provides no real shelter from the sun or other elements and in fact acts as an oven. The sculpture is composed of stainless steel and will reportedly feature low-level LED lighting that will be illuminated at night to allow for “unique shadows” to be cast upon people as they walk through it.

The Cocoon has had standard engineering, construction and risk management reviews.

It is unclear whether the risk management team assessed the risk to small children who might see it as a perfect climbing structure with no soft landing surface below it. Apparently, that problem has been solved by some “artistically” placed white placards with black lettering that say “not designed for climbing,” for those children who can read.