How much global warming is dangerous?

The Paleocene-Eocene Thermal Maximum (PETM) was a temperature spike that happened about 55 million years ago. The preceding Cretaceous and early Tertiary periods where hot and steamy with average global temperatures estimated to be at least 10 C (18 F) warmer than now. Atmospheric carbon dioxide was estimated to be at least three times higher than now. Life was abundant and flourishing in part because of fertilization by carbon dioxide – plant food. The Cretaceous has been described as both a “hot house” and as a “garden of Eden.” There was no ice at the poles.

The PETM temperature spike caused global temperatures to get even warmer. Drill core data from deep-sea sediments in the Atlantic and Pacific oceans suggested a rapid rise (geologically rapid, i.e., 10,000 years) of 5 C to 9 C (9-16 F) higher than the existing temperature prior to the event, that is, to as much as 34 F warmer than now. Global temperature stayed at this elevated level for about 100,000 years, then rapidly cooled back to the prevailing normal temperature and then cooled even more. Atmospheric carbon dioxide is estimated to have risen from the prevailing 1,000 ppm to about 1,700 ppm, more than four times higher than today. Life was robust.

Where did the methane come from? Let me set the scene. At the time of PETM, the continents were not in their present location. The North Atlantic was just beginning to open to the Arctic Ocean; this could have changed the ocean circulation and hence the sea temperature. Volcanism and other tectonic disturbances were very active as the Atlantic opened.

The second, and perhaps more likely source, involves volcanism and organic methane sequestered in deep sea sediments, similar to the oil shale deposits now being explored. As noted in Geotimes (October 2006), research in the Norwegian sea found thousands of hydrothermal vent complexes that date to the Paleocene-Eocene boundary. As methane-bearing sediments were subducted deeper and deeper, they came into contact with hot magma from the mantle. This can cause explosive events and rapid release of methane. This scenario is supported by the high ratio of Carbon-12 to Carbon-13, indicating microbic generated methane, found at the PETM event.

With rapid warming came both death and opportunity. Mammal diversity and range exploded as did that for terrestrial plants. The North American horse first appeared at this time. At the same time, however, deep-dwelling ocean fauna suffered a rapid extinction.

Although the global temperature dropped rapidly after PETM once the methane was used up, another warming spike happened about 40 million years ago in mid-Eocene time, possibly due to a similar cause. But afterwards another sharp cooling trend began and by 34 million years ago ice began to form in Antarctica. Global temperatures and atmospheric carbon dioxide have been dropping ever since (see graphs below). We are presently in an interglacial period of an ice age that began about three million years ago.

Life on Earth made it through the hot Cretaceous and PETM temperature spike, so it is hard to see how a rise of only 2 C (3.6 F), if it actually happened, would make much difference. Earth and its life are resilient.

The IPCC’s arbitrary 2 C (3.6 F) “tipping point” has no basis in science. It is just a phantom menace designed to control the world’s economy by requiring reduction of carbon dioxide emissions and hence energy use. As H.L. Mencken wrote: “The whole aim of practical politics is to keep the

populace alarmed – and hence clamorous to be led to safety – by menacing it with an endless series of hobgoblins, all of them imaginary.”

Below are two graphs, the first showing temperature history of the past 65 million years; the second showing the past 45 million years with more detail on geographic/geologic events. Notice that during almost all of that time, Earth was much warmer than it is now. 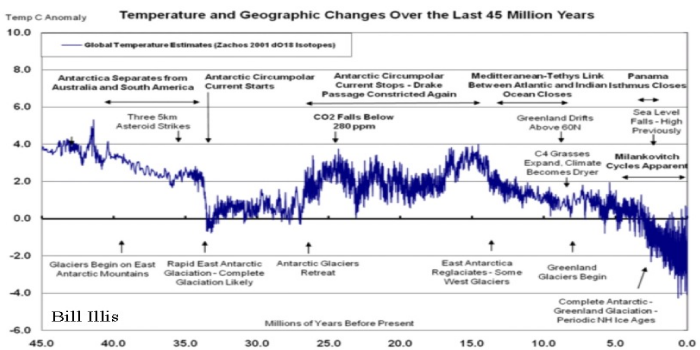 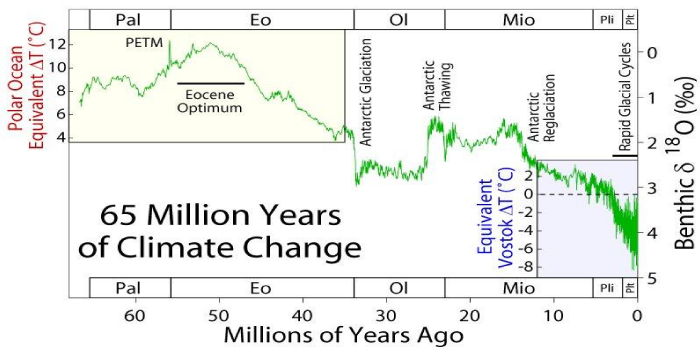 A Brief Geologic History of Arizona Chapter 3 Silurian to Permian

A brief geologic history of Arizona Chapter 7, the Cenozoic Era