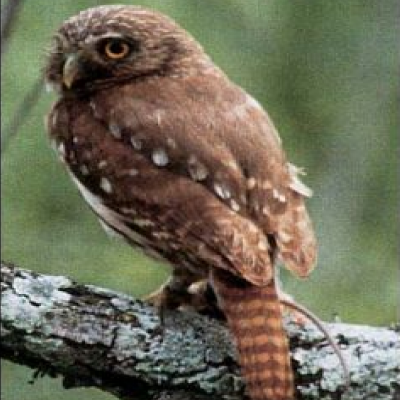 of the Cactus Ferruginous Pygmy-Owl in Arizona.” (Link to report)

They described the owl: “The cactus ferruginous pygmy-owl is a small gray-brown or rufous-brown owl, approximately 16.5 to 18 cm [about 7 inches] long. Wingspan is about 12 inches. In comparison with G. b. brasilianum and G. b. ridgwayi, this subspecies exhibits shorter wings, a longer tail, and generally lighter coloration.” Female typically weigh 75g while males average 64g.

“The vocal repertoire of the cactus ferruginous pygmy-owl comprises several calls, some of which appear to be specific to age or sex of owl. The advertising call of the adult male is heard primarily at dawn and dusk but also during daylight and even moon rise, especially during the courtship period. It is ventriloquial and consists of a prolonged and monotonous series of clear, mellow, whistling notes… During the breeding season, females utter a rapid chitter, possibly a contact call with the male and juveniles and also for food begging.”

Habitat for the ferruginous pygmy owl is variable. ” Partly because of this species’ plasticity

and partly due to the lack of detailed habitat studies, the habitat requirements of cactorum remain poorly understood.”

Pygmy owls are fierce hunters and frequently attack birds larger than themselves including mourning doves and chickens. They also hunt spiny lizards and rats.

The cactus ferruginous pygmy-owl was first described in the Tucson area in 1872 and naturalists described ” the subspecies as common or fairly common along some streams and rivers of central and southern Arizona.” Apparently there was a sharp decline sometime before 1950, cause unknown, but it is speculated that the decline was due to changes in riparian areas. Some naturalists, however, noted expansion along irrigation canals.

For more details and description of the owl, read the report linked above. 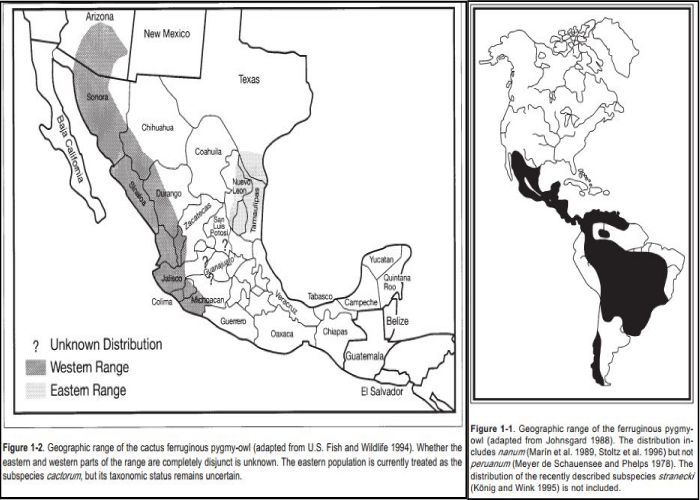 The Flaws in the Endangered Species Act