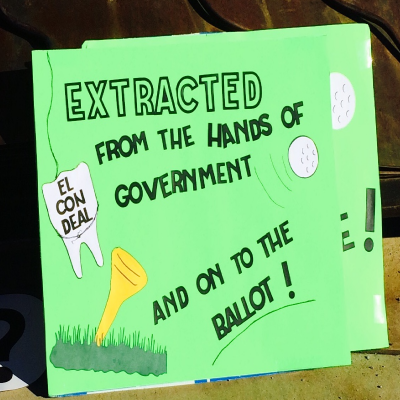 The residents of Oro Valley sent a clear message to Mayor Satish Hiremath when they successfully gathered 2010 more signatures than required to put the purchase of the Hilton El Conquistador Country Club, Golf and Tennis facilities to a vote of the people. Tee’d Off Over Tax Hike, (T.O.O.T.H in OV), have been collecting signatures since December 20th, and today announced they were turning in a total of 3,158 signatures to the Town Clerk.

Although they only needed 1,148 signatures for the referendum, democrats and republicans worked together to turn in well over twice that amount. The move signals to many in the community that a recall of the run-away-Council is not only possible, but likely after the abuses of residents’ trust by Hiremath, Vice-Mayor Lou Waters, Council members Mary Snider and Joe Hornat during the behind the scenes deal making with Tucson hotelier Humberto Lopez.

Shirl Lamonna, who is heading up the referendum said, “While many residents spoke out against the purchase of this property and resulting sales tax increase, the Mayor and Town Council failed to listen to the electorate by approving the El Con deal”. Lamonna went on to say, “Turning in over twice the amount of signatures shows the will of the people to take this out of the hands of Government and gives citizens a voice, thus sending a strong message to our elected officials.”

The Town clerk provided no instruction to the group when it initially began the petition drive, except to follow an Arizona Secretary of State’s handbook. The group followed the limited instruction provided by the handbook, and now the Town Clerk is claiming that a clerical error may void the petitions. However, according to a legal expert, a clerical error is the result of an oversight, and such was mistakenly, not purposely, made. The copy of the resolution accompanied each petition. As a result the intent of the petition was clear, as was presumably the intent of petition signers. The expert says that the forms can be easily remedied and the Town should not object to them.

The Oro Valley Town Council plans to vote at their January 21st meeting on whether or not to suspend the sales tax increase which was approved for the purchase of this property. Once verified by the town clerk, the group expects a special election on this issue sometime in May of this year.

T.O.O.T.H in OV is a Citizens Action Committee formed following the Town Council’s vote to purchase this property. For more information contact toothinov@gmail.com, or visit www.toothinov.org.