Earlier this year, Arizona’s Governor Doug Ducey proclaimed that he intended to raid the State Land Trust in order to pump desperately needed money into Arizona’s struggling schools. His announcement was greeted with applause and criticism by those familiar with our schools and school funding.

Few of those critics argued that money was not needed; they instead argued that Ducey’s plan threatened the principle in the Trust. Treasurer Jeff DeWit called for a more fiscally prudent and sustainable method. Superintendent of Public Instruction, Diane Douglas, a former school board member called for using the Trust and the Rainy Day fund, and offered no restrictions on the increased funding other than that it be used on the classroom. Teachers know that in the current academic climate, too many district level administrators will find some way to funnel back to their offices and away from the classroom.

While there is considerable scrutiny of traditional public schools, publicly funded charter schools’ books are as off limits. Despite the fact that traditional public school districts must account for every penny, the vast majority of Arizonans are not familiar with school spending, and school funding. As a result, they must trust the likes of Ducey and other politicos to make reasonable data-driven decisions based on best practices and the public’s will.

How is the public to decide what their will is? Currently, they form their opinions on carefully selected data provided by the same sometimes agenda-driven politicos. Mark Twain popularized the expression: “Lies, damned lies, and statistics,” and nothing has changed since Disraeli first used it in the 1800’s.

It is the fact that nothing has changed since the 1800’s, or since President George W. Bush first introduced the “data-driven decision making” catchphrase into the educational lexicon, or after Bill Gates shoved the means with which to gather that data into our schools, that drove us to go looking for the truth behind the various school funding claims. Much to our surprise we found a lot of data – none of which painted a whole picture – and even less was in a usable, therefor meaningful format.

Anyone who has been involved in education – on any level – has some suspicion as to what funding is available from various sources and how it is spent.  However suspicions and anecdotes are not good foundations for decisions – neither is cherry-picked data. So, we have begun putting that data together is what we hope is an accurate and meaningful format. Suggestions and criticisms are welcome.

By the numbers – which numbers to use?

Currently, Arizonans have access to numbers generated by multiple sources. For our purposes, we have culled the numbers from the Arizona Auditor General‘s annual “Dollars in the Classroom” reports, the Arizona Joint Legislative Budget Committee, and the Arizona Department of Education.

Each of these sources has their own limitations; for example many are critical of what is – and is not – counted as “Dollars in the Classroom,” however since each school district is using the same system a comparison of spending is meaningful.

If and when the stakeholders are finally invited to the table to have an honest discussion on funding, those parties must agree on the numbers they will accept as most accurate and meaningful. Whatever the criticism maybe, there must be a starting point; we have defined the basis of our discussion.

What do the numbers say? Not what you think

The numerous hoops though which our educators must jump only result in less than 12 percent of our education funding.

Of that funding, a considerable amount does not cover food. As an example, 100 percent of $319,184 ADE receives goes to “Team Nutrition: a program to integrate in the schools healthy Dietary guidelines which are lower in fat and sodium.”

In a nutshell, a huge portion of the money we receive from the federal government only makes its way into the classroom through the students’ stomachs. Since the First Lady’s failing food program made its way into the schools, too much of that food is making its way into garbage cans not tummies.  A considerable amount never makes it to our schools to be eaten or tossed away.

The key to any discussion of funding is the fact that the federal government demands a lot and gives little in return. 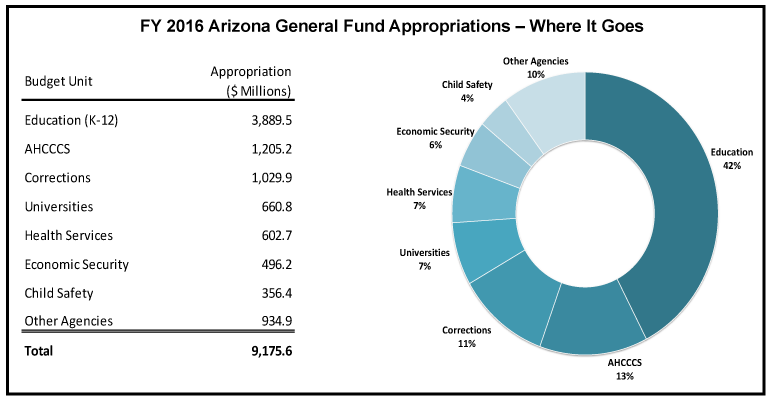 “Dollars in the Classroom”

In fiscal year 2014, for the second consecutive year, Arizona districts spent 53.8 percent of available operating dollars on instruction—the lowest percentage in the 14 years our Office has been monitoring district spending. The state-wide percentage decreased every year between fiscal years 2004 and 2013 before remaining flat in fiscal year 2014. Over this same 10-year period, the percentage of resources allocated to administration, plant operations, food service, transportation, student support, and instruction support have all increased.

Taxes and lawsuits will only do so much

Arizona is among the states with the lowest funding. As a state with a low-cost-of living compared to all others, it is understandable that we have achieved that rank. Some say that the cost of living should not be considered and argue that we should rank higher no matter how inexpensive life is here.

Others acknowledge our current low cost status, but say that the State should do more. With the current teacher shortage, it is evident that the market is demanding more. Few would argue that teachers do not deserve to be paid more.

Before the 1 cent sales tax expired in 2013, too much of the money that was supposed to support education actually went into roads and other infrastructure. The teachers union didn’t complain because the trade unions were doing quite well under that construct.

Proposition 301, a ballot measure approved by 53 percent of Arizona voters in the 2000 General Election increased funding to public education. According to the Attorney General, “Proposition 301 added Arizona Revised Statutes (“A.R.S.”) § 15-901.01, which requires annual inflation increases to the State’s funding for public schools.  Section 15-901.01, A.R.S., requires that the Legislature “increase the base level or other components of the revenue control limit by two percent” for fiscal years 2001-2002 through 2005-2006 and in subsequent fiscal years by two percent or the change in the gross domestic price deflator, whichever is less.”

Broke and mortgaging the State Capitol to pay its bills, the Governor and Legislature essentially forced the schools to sue for the money. In response, t Legislature filed a “Memorandum of Law on the Impossibility Defense” with the court. Despite the fact that the current structure will break the state because the amount is compounded, the court didn’t buy it.

That lawsuit to date – has produced nothing but well-paid attorneys and anti-Republican talking points. Some of the criticism is deserved, but it does nothing to get is to where we need to be; home to small classrooms filled with highly effective teachers.

Just this August, the parties in the case announced that they had reached an impasse.  In response, Senate President Andy Biggs and Speaker of the House David Gowan announced a proposal to place additional money into classrooms across the state. The Legislature’s proposal uses four revenue streams that would infuse as much as $5 billion in new money over the next 10 years by raiding the First Things First program, and using increased earnings from the state trust land – if there are any.

At the time of the proposal, Arizona State Rep. Mark Finchem questioned the lack of clarity. He stated:

“I remain concerned that there does not appear to be a clear plan on what the funds will be spent on, what the objective [what we’re solving for], what the measurement for successes is? Far too often government throws money at what they think is a problem, without a clear definition of what the problem is, what will solve it, and how we know we have solved. I still have not seen a clear definition of what we’re solving for, and until I know specifically what the money will be spent on I can’t support this.”

If for example we’re working to solve for increasing teacher pay to improve recruitment and retention of good to great teachers, then I know what the objective is. I would need to see very tight controls that ensure the money makes it to teacher pay, if that is the objective. Then of course I would want to know what the measure of success is? I’m not willing to just send money to school districts that have already proven that they cannot or will not hold the line, or reduce administrative costs.”

In light of the Auditor General’s finding, many would agree with Finchem.

Douglas’ spokesman Charles Tack wrote in an email dated September 11, “I know we did some specific research into reduced classroom sizes and a teacher’s direct impact on student achievement and both were promising. Since the funding plan is designed to help recruit and retain more good teachers by creating new positions and raising salaries, the Superintendent believes it can have a positive impact statewide.”

Clearly there is consensus as to the solution; small classrooms filled with highly effective teachers.  The questions that remain are; 1) how do we reduce administrative costs, and 2) how do we increase funding without breaking the bank?

In light of the limited federal funding we receive, Arizona State Rep. Bob Thorpe’s suggestion that we tax federal lands in the Arizona rather than receive Payment In Lieu of Taxes (PILT) monies, and use that money to fund our schools makes sense – or we can raise taxes on ourselves once again – or increase the money we take from the Trust. We need to put personal politics aside, and put every solution on the table, and everyone at the table should be willing to consider all options using agreed upon data.