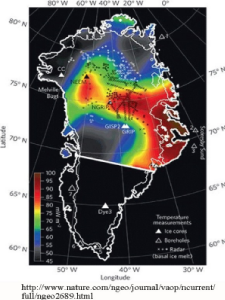 My article Greenland surprises (Dec. 2013) reported on research that posited “The Greenland ice sheet is melting from below, caused by a high heat flow from the mantle into the lithosphere. [Lithosphere: The solid part of the earth consisting of the crust and outer mantle.] The Greenland lithosphere is 2.8 to 1.7 billion years old and is only about 70 to 80 kilometers thick under Central Greenland.”

A recent paper (April, 2016) published in Nature Geoscience supports the hypothesis of a geologic cause of metling: Melting at the base of the Greenland ice sheet explained by Iceland hotspot history.

Ice-penetrating radar and ice core drilling have shown that large parts of the north-central Greenland ice sheet are melting from below. It has been argued that basal ice melt is due to the anomalously high geothermal flux that has also influenced the development of the longest ice stream in Greenland. Here we estimate the geothermal flux beneath the Greenland ice sheet and identify a 1,200-km-long and 400-km-wide geothermal anomaly beneath the thick ice cover. We suggest that this anomaly explains the observed melting of the ice sheet’s base, which drives the vigorous subglacial hydrology and controls the position of the head of the enigmatic 750-km-long northeastern Greenland ice stream. Our combined analysis of independent seismic, gravity and tectonic data implies that the geothermal anomaly, which crosses Greenland from west to east, was formed by Greenland’s passage over the Iceland mantle plume between roughly 80 and 35 million years ago. We conclude that the complexity of the present-day subglacial hydrology and dynamic features of the north-central Greenland ice sheet originated in tectonic events that pre-date the onset of glaciation in Greenland by many tens of millions of years.

West Antarctica is underlain by a string of active volcanoes. 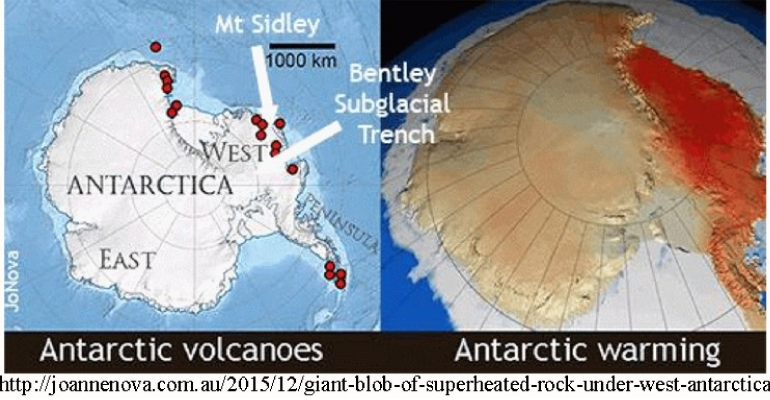 “Scientists were able to deploy ruggidized seismometers that could withstand intense cold in Antarctica only recently. A line of seismometers strung across the West Antarctic Rift Valley and the Marie Byrd Land have given geologists their first good look at the mantle beneath the ice and rocks, revealing areas of hot rock that might affect the behavior of the overlying ice sheet.” “A line of volcanoes hints there might be a hidden mantle plume, like a blowtorch, beneath the plate,” said Doug Wiens, PhD, professor of earth and planetary sciences and a co-author on the paper. “The volcanoes would pop up in a row as the plate moved over it.” 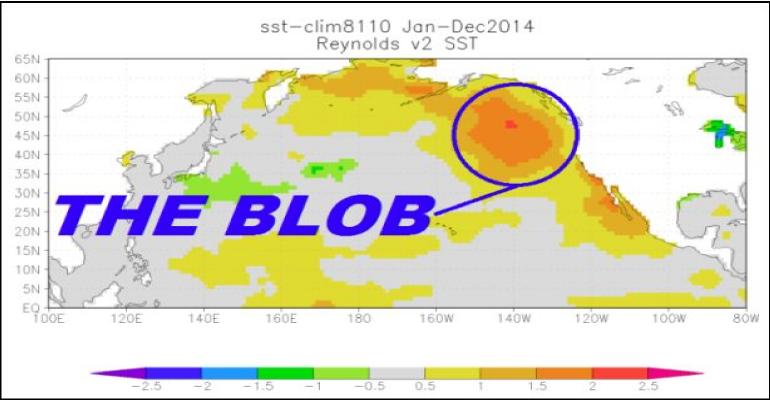 The “blob” was an area of very warm water off the west coast of North America in 2013 and 2014 that was apparently the cause of extreme heat and drought in the West, and record snow and cold in much of the East. The blob was attributed to a persistent high pressure area. But there is another possible cause.

Beneath the “blob” is an active volcanic region called the Axial volcano and seamount. Dr. Tim Ball calculated heat flow from the volcano. He says that “The amount of energy from the magma was far in excess of what was needed to supply the heat necessary to create the ‘Blob anomaly.’” [link] 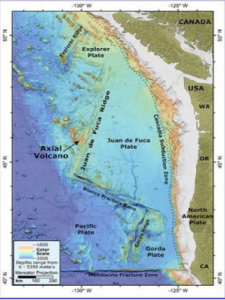 By the way, the area near the Juan de Fuca rift may be Where the Next Big American Earthquake and Tsunami Might Occur. See more on the eruptions of the Axial Volcano: link.