The greatest challenge facing mankind is the challenge of distinguishing reality from fantasy, truth from propaganda. Perceiving the truth has always been a challenge to mankind, but in the information age (or as I think of it, the disinformation age) it takes on a special urgency and importance. –Michael Crichton

The Global Cooling Skyscraper Which Could Save the Planet

Italian architect Paolo Venturella has proposed a gigantic megastructure to prevent global warming, though building it may present a few practical difficulties: a vast horizontal building touching the Earth’s equator, whose size appears to dwarf the diameter of the planet. 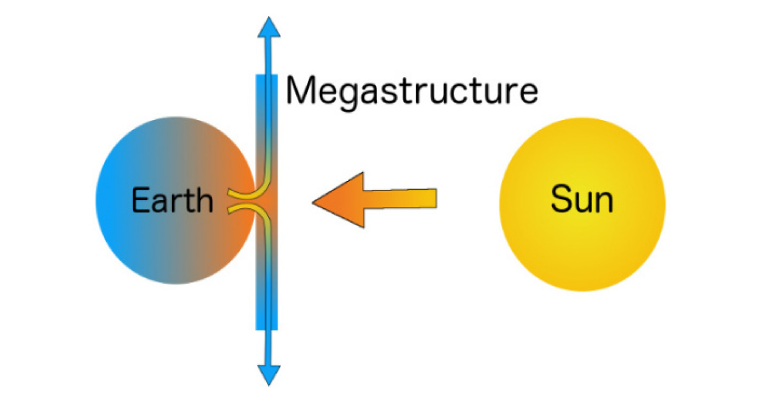 There are a few practical difficulties, such as smelting all that construction steel using wind power, finding a way to get a chunk of the Earth’s crust to support trillions of tons of building, handling the centripetal stresses caused by the Earth’s rotation, preventing the building from “seesawing” on its mount, and probably a host of other civic engineering issues. Read more

It is possible to significantly slow down and even temporarily stop the progression of global warming by increasing the atmospheric aerosol concentration, shows a new study from the University of Eastern Finland. The study found that aerosol particles injected into the stratosphere proved extremely efficient in cooling down the climate. The proposal is to use global airline traffic and ship traffic for the purposes of atmospheric temperature regulation by increasing the sulphuric concentrations of fuels. This would make it possible to significantly increase stratospheric aerosol concentrations and cloud reflectivity in open sea. However, sulphuric concentrations of fuels would have to be increased beyond the levels defined in international agreements. Read more Comment: Over the years, great pains have been taken to scrub sulfur out of emissions from burning fossil fuels. Now we have to put it back. Lesson: clean air is bad?

Ministry of Truth at work:

In a move spearheaded by environmentalists, the Portland Public Schools board unanimously approved a resolution aimed at eliminating doubt of climate change and its causes in schools. “It is unacceptable that we have textbooks in our schools that spread doubt about the human causes and urgency of the crisis,” said Lincoln High School student Gaby Lemieux in board testimony. “Climate education is not a niche or a specialization, it is the minimum requirement for my generation to be successful in our changing world.” (Source) It’s not just that Portland banished from its schools any active denial of catastrophic, man-made global warming; it’s that they banished any language that implies the smallest amount of doubt. The school board resolution mandates the adoption of curriculum and educational opportunities that address climate change and “climate justice” in all Portland Public Schools. “Climate justice is a social justice issue that frames climate change not in physical or environmental terms, but as a social, ethical and political issue. Climate justice is based on the idea that climate change has a disproportionate effect on low-income and minority communities, which will now be taught to students in the Portland Public School system.” (Source)  Brainwashing coming to your neighborhood soon?

Good news for the 9.6 million clients of Kaiser Permanente Health Consortium; They have just committed to spending an unknown amount of your health premiums to reduce Kaiser CO2 emissions to zero by 2025. They will slash the hospital system’s water use, recycle or compost all of its non-hazardous waste and eliminate or offset its greenhouse gas emissions. Kaiser, based in Oakland, also will buy its food from local sources or farms that follow sustainable practices, most notably avoiding the overuse of antibiotics. Next time the cost of your Kaiser health plan premiums go up, remember not to be selfish about it, because Kaiser plans to spend some of that extra cash on your behalf, to help save the world from CO2. (Source)

The Ontario government will spend more than $7-billion over four years on a sweeping climate change plan that will affect every aspect of life – from what people drive to how they heat their homes and workplaces – in a bid to slash the province’s carbon footprint. Ontario will begin phasing out natural gas for heating, provide incentives to retrofit buildings and give rebates to drivers who buy electric vehicles. It will also require that gasoline sold in the province contain less carbon, bring in building code rules requiring all new homes by 2030 to be heated with electricity or geothermal systems, and set a target for 12 per cent of all new vehicle sales to be electric by 2025. (Source)

Prepare for blackouts: San Diego To Run 100 Percent On Renewable Energy By 2035

The city of San Diego has announced a bold new plan to run completely on renewable energy by 2035. While the city already produces the second largest electrical output from solar energy in the U.S., the new plan further details a way to cope with the changing climate. It plans to reduce 50% of the greenhouse gas emission by 2035, as well as create new jobs through the manufacturing and installation of solar panels.

Good luck with that, what could possibly go wrong? Striking a “sensible balance” should also include a backup generation plan for those times when wind doesn’t blow, sunlight is reduced, or private schemes go belly up because the subsidies that make them profitable get yanked. And, with the fragility of the power grid responsible for the Great 2011 Southwest blackout, one wonders how well San Diego will fare if their wind farms don’t produce enough power and load shedding occurs to protect the grid from failure, like it did in 2015, leaving thousands in San Diego without power.

Plus, the San Onofre Nuclear Generating Station is offline, and will be decommissioned, so San Diego is in an even weaker position that they were before, losing 20% of their local power capacity. Renewables just won’t maintain a reliable base load. (Source)

If elected, Hillary plans to install ‘climate situation room’ in the White House

Hillary Clinton plans to focus on smaller legislative actions and use executive action on climate and energy issues if elected, her campaign chairman John Podesta said at a conference. Clinton also intends to install a Roosevelt Map Room-inspired situation room just for climate change. Analysis of her climate strategy reveals that Clinton intends to reduce greenhouse gas emissions up to 30 percent below 2005 level by 2025 and support fossil fuel workers through the clean energy transition. She ultimately would lay the groundwork for achieving 80 percent cuts below 2005 by 2050, strengthening President Obama’s current climate pledges. (Source) A situation room? Does the climate change minute to minute? Read also: “Hillary Clinton’s climate and energy policies, explained”

EPA on the march:

EPA head Gina McCarthy announced first-ever standards to reduce the amount of methane the oil and gas industry releases into the air. The announcement this week was days away from a supposed mid-May deadline to pass rules for the Obama administration, one last-ditch attempt to slow the economy down. The rules are yet another push by the Obama administration to further cement its climate change fighting chops — in other words, expand federal control. In her announcement, McCarthy claimed the rules are supposedly to help make the oil and gas industries safer, but that’s a transparent attempt to make the regs easier to stomach. Kyle Isakower, a vice president of policy at the American Petroleum Institute, said, “The industry is already leading the way on methane reductions, because it is good for the environment and good for business. Imposing a one-size-fits-all scheme on the industry could actually stifle innovation and discourage investments in new technologies that could serve to further reduce emissions.” But Obama is living out the twilight of his time in the White House, so what’s he got to lose? (Source)

Under questioning by Rep. David McKinley (R-WV) before the House Energy and Commerce Committee, Environmental Protection Agency (EPA) Administrator Gina McCarthy admitted the Obama administration’s climate efforts will do nothing to prevent climate change, acknowledging they are symbolic attempts to get other countries to make steep carbon dioxide emissions cuts. Read more

Local researchers in Galway plan to measure the impact of gaseous releases from Ireland’s cows on global warming. The School of Physics at NUIG has invited tenders for a research and development service to develop a “combined measurement and modeling system to verify CH4 sources and sinks over Ireland”. Read more

Flashback, to when the scientific consensus said Earth was entering another glacial epoch.

During the 1960s and 1970s, there was widespread concern about a dramatically cooling climate, especially in the Northern Hemisphere. A throng of scientific papers were written about the observed global-scale cooling, a potentially imminent ice age, and how anthropogenic pollution may be contributing to the climate changes. The effects of CO2 were, at the time, thought to be less concerning. Read more

In 1975, the top climatologist in the US warned that global cooling was going to cause terrorism, nuclear blackmail, malnutrition, and starvation.

In the northern hemisphere, home to most of the world’s people, average annual temperature has fallen 1.8 degrees Fahrenheit since 1955. Though that’s hardly enough to start you shivering, weather scientists warn that even slight cooling on a global scale can have chilling implications for humanity. Read more.

In the end, science offers us the only way out of politics. And if we allow science to become politicized, then we are lost. We will enter the Internet version of the dark ages, an era of shifting fears and wild prejudices, transmitted to people who don’t know any better. That’s not a good future for the human race. That’s our past. So it’s time to abandon the religion of environmentalism, and return to the science of environmentalism, and base our public policy decisions firmly on that. – Michael Crichton

The Bankruptcy of Climate Science

Global Warming – The Madness of our Age