El Jefe, the lone, male jaguar who has been roaming the Santa Rita Mountains for the last several years has not been seen since mid- 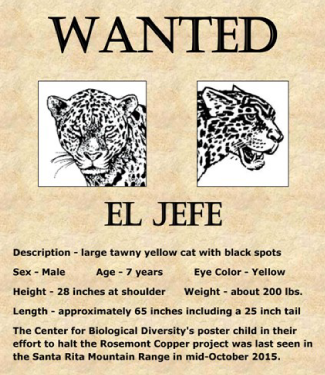 October 2015. His disappearance and the recent release of an Amended Biological Opinion by the U. S. Fish and Wildlife Service are major setbacks to the Center for Biological Diversity’s effort to halt the Rosemont Copper project. In a news release dated, June 29, 2016, the Center for Biological Diversity announced their intention to file a lawsuit against the U. S. Fish and Wildlife Service. This document contains numerous of false and misleading statements.

Their fallacious arguments are based on intermittent sightings of a lone male jaguar, which they cite as evidence for Rosemont being prime critical jaguar habitat that is situated along a narrowly constrained corridor all jaguars must use to return to their ancestral homelands in the United States. However, the scientific and historical data do not support their conclusions.

All available historical and scientific data clearly show jaguars are not returning to their ancestral homelands in the United States. The jaguar’s range has become smaller over the last several hundred years as its northern limit has gradually moved south. This contraction has resulted from a change in habitat that accompanied unprecedented growth of the human population and impacts that have accompanied this growth. 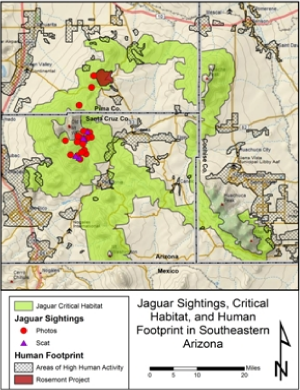 One of the major arguments that has been made against the Rosemont Copper project is its impact on the movement of jaguars traveling from the southern portion of the Santa Rita Range to the Empire Mountains. However, areas of high human activity overlapping critical jaguar habitat along Route 83 in the Davidson Canyon area and along Route 82, between Patagonia and Sonoita impede their transit from Mexico to isolated areas in Arizona, where only lone male jaguars like El Jefe can eke out a living. Female jaguars have avoided these areas due to insufficient resources to raise their young, making the return of a sustainable jaguar population to Arizona highly unlikely. With continued growth in Arizona and elsewhere throughout the southwestern United States, the historical range of the jaguar will continue to shrink. Halting the Rosemont Copper project will not reverse this trend.

The map also shows the proposed site of the Rosemont mine is not in the heart of El Jefe’s home territory. According to a recently published Open-File Report (#2016-1095) by the U. S. Geological Survey, most of the recorded sightings of El Jefe in the Santa Rita Mountains were made in an area around the headwaters of Temporal Gulch. Located approximately 14 miles south of the proposed Rosemont mine site, El Jefe’s home territory was located in a very remote area far from any human activity. It will not be impacted by this mining venture. This is one of the reasons why the U. S. Fish and Wildlife Service issued a favorable Amended Biological Opinion for the Rosemont Copper project.

El Jefe’s disappearance from the Santa Rita Mountains in mid-October 2015 may have resulted from a natural impulse to establish a home territory in northern Mexico that overlaps with home ranges of several female jaguars. If that is the case, it only reinforces the conclusion that habitat required for sustainable jaguar populations no longer exists in the United States.

Over the last nine years, more than 400 reports on virtually every aspect of proposed Rosemont Copper project have been prepared and vetted by experts within the private and public sectors. To date, this extensive review of the data has clearly shown this 21st century mining venture can be developed, operated and reclaimed in accordance with our nation’s laws. With the approval of the final permits and inevitable rise in the price of metals, Rosemont Copper will be poised to responsibly meet the demand for products required to maintain our economic and national security.

Disclaimer: David F. Briggs is a resident of Pima County and a retired geologist, who has intermittently worked on the Rosemont project between 2006 and 2014. The opinions expressed here are those of the author and do not necessarily reflect those of Rosemont Copper.

Copyright © (2016) by David F. Briggs. Reprint is permitted only if the credit of authorship is provided and linked back to the source.