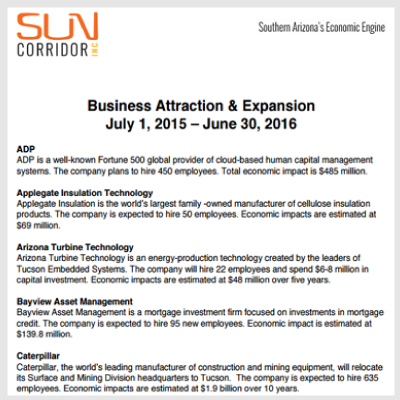 Market Watch is reporting that Caterpillar is cutting jobs after offering one of the “gloomiest” outlooks this year. Caterpillar Inc., which just received a sweetheart deal to locate some of its executive staff to Tucson, is now cutting jobs across the board including some in southern Arizona.

Caterpillar said additional workforce reductions are expected in the second half of the year.

In February the company warned of cuts as part of a massive restructuring plan. In May, Pima County officials celebrated the relocation of the company.

On July 26, the company issued its Second-Quarter 2016 Results. In the statement the company advised investors:

World economic growth remains subdued and is not sufficient to drive improvement in most of the industries and markets we serve.

Commodity prices appear to have stabilized, but at low levels. Global uncertainty continues, and the recent Brexit outcome and the turmoil in Turkey add to risks, especially in Europe.

The outlook for 2016 that we provided with our first-quarter financial results in April expected sales and revenues in a range of $40 to $42 billion. At the midpoint of that range, profit was expected to be $3.00 per share, or $3.70 per share excluding restructuring costs. Over the past quarter, economic risks have persisted and, as a result, our current expectations for 2016 sales and revenues are closer to the bottom end of that outlook range.

On July 18, Sun Corridor, formerly known as TREO, claimed that Caterpillar was expected to hire 635 employees and its estimated it economic impacts to be “$1.9 billion over 10 years.”

Sun Corridor, which is funded primarily by Pima County has been desperate this election year to produce any results. As a result, while business interests and Supervisor Ally Miller questioned spending taxpayer dollars to subsidize Caterpillar’s relocation, the head of Sun Corridor, Joe Snell and the majority of County supervisors touted the sweetheart deal.