The lightning accompanying monsoon storms reminded me of a curiosity I have in my collection. It is a cylinder of fused soil about 6 inches long and 2.5 inches in diameter.

What also brought this to mind was a new paper recently published in Nature Scientific Reports.

Two researchers from the University of South Florida School of Geosciences decided to study fulgurites to see if they could developed a method to measure the amount energy expended by a bolt of cloud-to-ground lightning. Atmospheric physicists can approximate lightning bolt energy by measuring the electrical current and temperature of bolts as they occur. The numbers are usually approximations. The USF team is the first to investigate the energy in lightning strikes by using geology “after-the-fact” research, rather than measuring energy during a strike. By conducting this lightning strike “archaeology,” the researchers were able to measure the energy in a bolt of lightning that struck Florida sand thousands of years ago. 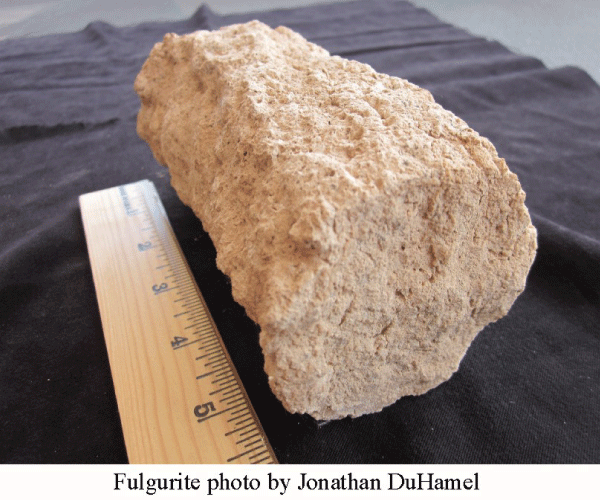 “The team collected more than 250 fulgurites – both recent and ancient – from sand mines in Polk County, Fla., at a site that is believed to have recorded thousands of years of lightning strikes, providing a way to measure the lightning strike history of what is today called the I-4 Corridor, a region near Tampa and Orlando. They analyzed the properties of the fulgurites, paying particular attention to the length and circumference of the glass cylinders because the amount energy released is revealed by these dimensions.” (By the way, the press release touts that Florida is the “lightning capital of the United States.” I wonder if they have ever been to Arizona.)

The researchers developed a statistical model based on the length, diameter, and composition of the fulgurite to help them estimate the energy in the lightning strike. You can read the paper to judge if their assumptions are reasonable.

In an earlier study, other researchers studied the gases trapped in glassy bubbles in fulgurite (see the journal Geology,) That study concluded that fulgurite gases and luminescence geochronology can be used in quantitative paleoecology. Thermoluminescence can be used to date the specimen. These researchers found that theSahel desert in northern Africa extended much farther north 15 thousand years ago.