The new discovery, called the Hermosa Taylor deposit, discovered in 2015, lies about 2,000 feet to the northwest of Hermosa Central. This mineralization is a stratabound carbonate replacement deposit. This deposit contains sulfides of zinc, lead (with silver) and copper. A resource estimate as of Feb., 2016, claims 39.4 million ton of 11.04% zinc equivalent. (An “equivalent” grade adds in prorated values for copper, lead and silver, see chart here.) There is also an overlying oxide zone according to the cross-section (see here).

The new Taylor deposit remains open to the north, west, and south, so the actual resource could be much bigger than currently estimated. See exploration potential map here.

Update, September 13: Arizona Mining reports that a step-out hole sited 1,300 feet northwest of the existing resource encountered intense alteration and recrystallization of the carbonate host and five distinct mineralized intervals including a 24.5 foot interval which assayed 23.1% zinc, 13.5% lead, 0.10% copper and 7.3 ounces per ton silver within a 49.5 foot thick broader zone of mineralization which assayed 13.6% zinc, 8.04% lead, 0.11% copper and 4.79 opt silver. This result bodes well for the possibility of greatly expanding the resource. 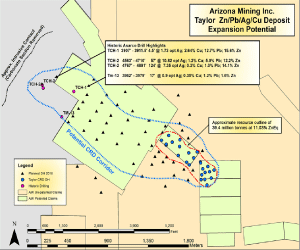 Both the Central and Taylor deposits are hosted by Paleozoic sandstones and limestones and by Cretaceous and Tertiary volcanic rocks. See here for more detail.

The major lithologic host for the Hermosa deposit is an epiclastic sandstone that is locally interbedded with very fine-grained tuff. High-angle faults, trending predominantly north-south and east-west, bound the horst blocks in the area, and may have served as conduits for mineralizing fluids.

Sections through the deposit oriented both east-west and north-south suggest that the strata are deformed into a doubly-plunging anticline the apex of which is coincident with the highest grade-thickness of silver accumulation, which suggests that deformation pre-dated the mineralizing event, that mineralizing fluids migrated to the topographically highest permeable area, and that post-mineral tilting of the deposit has occurred.

The company still has more drilling and metallurgical testing to do, but that’s the easy part. The hard part is navigating the regulatory quagmire for permitting.