On Monday, Tucson Unified School District Governing Board members Dr. Mark Stegeman and Michael Hicks questioned the District’s priorities in light of the recent release of magnet school budgets and complaints expressed by Utterback Magnet Middle School parents and staff. At the same time the Mendoza Plaintiffs’ Representative in the desegregation case, Sylvia Campoy, informed stakeholders that the District has ignored the District’s Comprehensive Magnet Plan which is part of the 2013 Unitary Status Plan

Appropriate funding of the magnet schools is a requirement of the Unitary Status Plan. Given that the District’s administration claims to be working towards unitary status in the near future it is imperative that the schools are funded to a level where they can become magnetic for students, according to statement released on Monday by Stegeman and Hicks.

Aside from not adequately funding magnet schools, Campoy says the District has provided “gravely distorted” communication to “magnet school communities and, indeed, the larger community” which “further confused and exacerbated the situation.”

Ironically, in their press release Hicks and Stegeman cite a trip to Chicago by Superintendent H.T. Sanchez, and Stephanie Boe, Director of Communications, to attend a public relations conference as an example of questionable spending. Sanchez and Boe spent at least $1000 a day travelling to and attending the conference. Stegeman and Hicks say the “travel records show that the administration’s current priorities are promotion of self rather than magnet schools.” 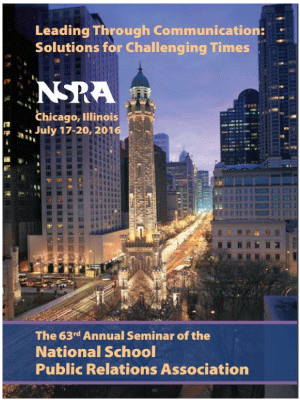 NSPRA’s special rate is $210 per night (single or double), which includes discounted wireless internet access in the guest rooms at a rate of $1.00/day.

“That money would have been better spent on supplies for our classrooms. That would make our magnet schools magnetic,” said Hicks. And in light of Campoy’s report, Hicks is right; the conference did little to improve the District’s communication skills or improve public relations.

“The Districts’ record of magnet spending benefits students and classrooms just like its spending of Prop 123 and 301 monies: not at all. If the current Board majority had stated three years ago that it didn’t believe in integration, nor in magnet school programs it could not have done a better job of dismantling them. At one point, when we had a somewhat fully staffed Magnet Office, there was a great deal of support for integrating magnet programs into the classrooms (thereby not simply creating a “pull out” situation but a possibility for enhanced classroom learning as a result of magent school status,” said TUSD Governing Board candidate Betts Putnam Hidalgo. “However, it quickly became evident that the many many hours of work on Magnet Plans, etc., could easily be overturned by Principals and other Administrators who do not in the least champion magnet programs. Why, then, are they working in Magnet Schools? It appears that the District has done everything it could to undermine the currently existing magnet schools, and will blame the Special Master for its own chronic malfeasance if/when they are demagnetized. Usual District bait and switch game, where the greatest damage goes to the kids.”

When they weren’t busy learning how to sell themselves, District leadership, including Board members Adelita Grijalva, and Cam Juarez embraced the use of personal insults and attacks, advises Campoy. She writes:

“Essentially the District encouraged school communities to oppose the court-ordered requirements, such as integration, without explaining that this is a fundamental requirement of the desegregation court order. Other such critical facts and information were also excluded. Petitions and letters to the court, which were said to have originated with the TUSD administration, were circulated during school hours and both parents and staff members were placed in a vulnerable and terrible position. Upon receipt of these letters and petitions, the Court stated that “Because of the highly visible nature of the magnet schools, the Court has received large numbers of letters from concerned citizens. These letters reflect a great amount of misunderstanding by the public regarding the changes underway to TUSD’s magnet program” (November 19, 2015 Court Order). The TUSD campaign was saturated with strategies which directed culpability towards the USP, the Comprehensive Magnet Plan, the Special Master, the Plaintiffs, as well as their legal counsel and representatives. The TUSD campaign also embraced the use of personal insults and attacks, which has depicted a new and tarnished level of decorum in dealing with the Special Master and plaintiffs. The District assumed no responsibility for its failures to support the magnet schools which were found at risk of losing their magnet status largely due to the District’s own neglect. TUSD offered no substantive rational for obvious problems such as the high teacher vacancy rate at magnet schools or the decrease in the allocation of funding to specific magnet schools. During their review of the individual magnet school improvement plans the Mendoza Plaintiffs found that some of the magnet school’s budgets had significantly decreased from one TUSD document to another and successfully insisted – through a stipulated agreement- that the higher budgeted amount be reinstated.”

Stegeman, an Economics professor at the University of Arizona, reviewed the current available budget documents. He and Hicks believe that the current budget shows spending that will not advance the District’s administration’s stated goal. For example, the budget recently proposed by the administration shows that Utterback will experience a substantial cut in the next school year. It is inconceivable that the District can attract students to a school that is supposed to offer special arts programs when the budget reflects no support for those programs.

According to Campoy, those cuts may not be for lack of funding. She writes:

“Last year the plaintiffs and Special Master learned that TUSD essentially lost 3.9 million desegregation dollars due to its failure to utilize the funding within a given timeframe. The reasons given for the loss were blatantly inconsistent and never fully clarified. The last couple of years, there has been up to $5,000,000 of desegregation funds which had been left unspent at which point the plaintiffs and Special Master worked with TUSD to ensure that USP related expenditures were made prior to the state’s imposed deadlines to utilize the funding. Such expenditures have included student focused items/programs such as computers, reading programs, multicultural books, and summer school offerings. The plaintiffs and Special Master have stressed the importance of being provided with information about the specific sources of the year-end unexpended dollars. The anticipated details have never been provided. It may well be that a portion of the amount of these dollars is derived from unexpended dollars from the magnet schools, which is most troublesome.”

The District’s failure has put the magnets at risk. “Although I am dismayed by what I believe has been significantly less than a concerted effort by TUSD to utilize the additional year to correct the identified problems at several TUSD magnet schools, I sorrowfully recognize that the Special Master will have no choice but to use the established criteria to make his recommendations, which will likely include that some schools lose their magnet status. This is tremendously disconcerting given the time and resources which TUSD has had availed to fully support all magnet schools,” writes Campoy.

According to Campoy, the District’s leadership is fighting against the desegregation court order’s requirement pertaining to school integration, of which magnet schools are a pivotal part. While that may be hard to believe in this day and age, Sanchez has told people that he is afraid that integration will bring an end to the desegregation funding the District currently receives. As a result, many people believe that it is the money that keeps the Board majority fighting integration. Campoy says that if this is what Sanchez is conveying it is not consistent with what the Court mandates pertaining to integration of its schools; especially its magnet schools.

Whatever the case may be, Stegeman and Hicks say TUSD must examine its spending priorities and ask how each expense benefits children. The want every purchase order scrutinized and the “requester must be prepared to offer a sound rationale for payment. That rationale must be based on the fundamental question: how does this benefit our students and classrooms?”