The story begins: “Human-caused climate change was at least partly to blame and probably mostly to blame for Tucson’s record-setting March heat, says a researcher with expertise in this field.”

This story is another example of speculation based on computer modeling and cherry-picked data rather than physical evidence. The Star consulted Dr. Geert Jan van Oldenborgh of the Royal Netherlands Meteorological Institute who analyzed possible factors for explaining Tucson’s March temperatures. “He concluded that long-term temperature trends point almost certainly to human-caused greenhouse-gas emissions as a factor. The unresolved question, he said, is how big of a factor they are.” The article provides no physical evidence to support that conclusion.

Ignoring the high temperatures during the 1900s to 1930s, van Oldenborgh examined the record beginning in 1950 and found “a clear upward trend in the March high temperatures started in the middle 1970s.” (See my article: March 2017 – Hottest Ever in Tucson? for earlier temperature data. That article shows Tucson’s temperatures steadily rising, probably due to the urban heat-island effect, while temperatures in rural Tombstone remained level.)

From the Star: “Looking across Southern and Central Arizona high temperatures for March, van Oldenborgh found they seem to be warming across the region but that Tucson’s temperatures are rising faster than in nearby cities Casa Grande and Willcox.”

Oldenborgh looked at computer models. One model set “showed that March high temperatures have risen at a point near Tucson at about 2.5 times the rate the global average temperature has risen since about 1950. The model shows that is the local effect of global warming.” (A new term: local global warming?) The other model set “showed that Tucson has received on average less long-term warming than shown by the first model.”

The article contained much “expert” speculation, but from the material presented, I see no physical evidence justifying the conclusion nor the headlines that could attribute the high March temperatures to carbon dioxide emissions. If it was not just a quirk of natural variation, then maybe Tucson has its own evil cloud of carbon dioxide hovering above the city. Of course, there was lots of hot air expelled by local politicians in March.

In my opinion, this type of story is, to put it politely, junk science, designed to stir up alarm about a subject that has become purely political. 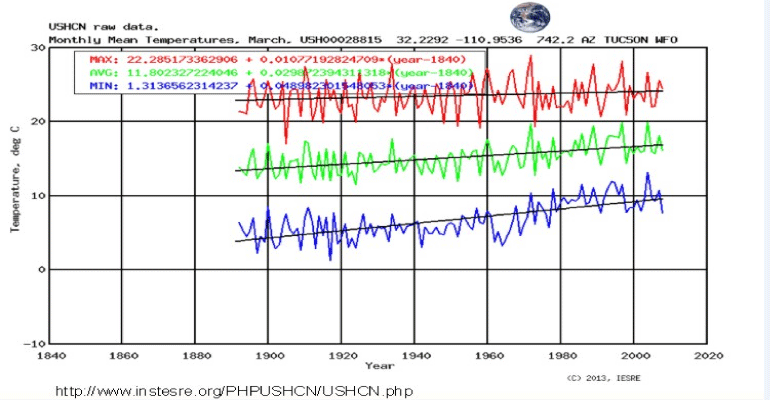 Since I wrote the MORE MARCH MADNESS article, I found the old temperatures records from the USHCN station at the University of Arizona. The top red line shows the March high temperature spikes. Not much different from this past March. The rise in average and night temperatures shown by the other lines are consistent with the urban heat island effect.