On Tuesday, the Pima County Board of Supervisors ignored the advice of counsel and voted to ban the controversial practice of gay conversion therapy. Supervisor Richard Elias, who promoted the resolution outlawing the therapy, admitted that there are no known cases of counselors in Pima County who practice gay conversion.

Supervisors Sharon Bronson, Ramon Valadez, and Elias voted for the mostly symbolic resolution and put at risk considerable State of Arizona funding, according to the County Attorney’s Office and an attorney with the conservative Center For Arizona Policy (CAP).

Supervisors Ally Miller and Steve Christy did not endorse the controversial therapy, but questioned why the Board of Supervisors would weigh-in on the issue at all. “Don’t we have a county to run? We are not addressing any of the issues any of us were elected to address. I was elected to of finding ways to improve and correct our deplorable roads and infrastructure situation without raising our taxes.”

Miller echoed the concerns of both the County attorney and CAP. “I don’t have children but I wouldn’t want anybody and I don’t want anybody telling me how to raise my children. Nor do I think it is the role of the supervisors to wade into this arena.”

Michael Clark, counsel for CAP, sent a letter to the supervisors on July 29, advising them of the risks associated with the resolution. “Center for Arizona Policy is a nonprofit advocacy group that promotes and defends the foundational principles of life, marriage and family, and religious freedom,” wrote Clark. “We regularly offer analysis of proposed laws in Arizona and their effect on these foundational principles. We respectfully request that you consider our legal analysis of a proposed Pima County ordinance addressing so-called “conversion therapy.” The proposed ordinance will likely violate the constitutional rights of professional counselors, parents, and children. It also likely violates Arizona law, namely, Arizona’s Parents’ Bill of Rights. A.R.S. § 1-601 and § 1-602.”

The Supreme Court has long held that it is impermissible for the government to regulate speech based upon its content or viewpoint. See, e.g., Turner Broad. Sys., Inc. v. FCC, 512 U.S. 622, 641 (1994) (“Government action that stifles speech on account of its message … pose[s] the inherent risk that the [g]overnment seeks not to advance a legitimate regulatory goal, but to suppress unpopular ideas or information or manipulate the public debate through coercion rather than persuasion.”).

For example, imagine a 17-year-old female who experienced same-sex attractions but who also believed that acting upon those attractions would be inconsistent with her sincerely-held religious beliefs. If that female believed that, rather than acting on her attractions, she should instead choose to live a chaste life, she would be unable to obtain professional counseling to assist her with her lifestyle choice. Why? Because the proposed ordinance prohibits counseling that would assist her with reducing sexual attractions in order to enable her to live a chaste life.

Similarly, if a male teenager, after several years of identifying as a female, came to realize that he would be most fulfilled by living consistent with his male biological sex, the ordinance would prohibit him from finding a professional counselor to help him toward his desired outcome because it bans “efforts to change behaviors or gender expressions.” Yet, as was reported in the New York Times, a 2008 study in the Netherlands found that 70% of boys who had gender dysphoria grew out of it within 10 years.1 Under the ordinance, these boys would be denied much needed counseling to help them transition back to a life as a male as they desire.

As a result of the proposed ordinance, minors who seek affirmation of their same-sex attraction or gender identity are able to procure professional counseling services, whereas those who believe that they should live a chaste life consistent upon their sincerely-held religious beliefs or that they should seek to live consistent with their biological sex are denied professional counseling.

By placing unique restrictions on counseling speech related to sexual orientation and gender identity, the ordinance “disfavors … speech with a particular content. More than that, the [ordinance] disfavors specific speakers, namely” professional counselors who want to assist minors that desire to live a chaste life or behave consistent with their biological sex. See Sorrell v. IMS Health Inc., 131 S. Ct. 2653, 2663 (2011). The proposed ordinance thus “on its face burdens disfavored speech by disfavored speakers.”

Strict scrutiny is required whenever government creates “a regulation of speech because of disagreement with the message it conveys,” id. at 2664 (quotation omitted), as the proposed ordinance has unabashedly done here. See Brown v. Entm’t Merchs. Ass’n, 131 S. Ct. 2729, 2738 (2011) (noting that a content-based regulation of speech that purported to shield minors from violent video game content was “invalid unless [the state] demonstrate[d] that it passes strict scrutiny—that is, unless it [was] justified by a compelling government interest and [was] narrowly drawn to serve that interest”). The proposed ordinance is unlikely to survive this rigorous test because of its facially unconstitutional censorship of protected speech based on its content and viewpoint.

Andrew L. Flagg, Chief Civil Deputy County Attorney advised supervisors in a memorandum dated July 25, that although the therapy has been condemned elsewhere “there are some legal risks associated with its adoption.” Flagg noted that counties cannot pass ordinances that conflict with state law, and a “challenger could contend that only the State may regulate therapists.” Flagg appeared to believe that the County could defend itself against such a claim.

Flagg noted that the County would have a more difficult time defending itself against a free speech claim such as the ones cited by CAP. “The Ordinance is drafted to have a strong chance of withstanding a religion-based challenge, but none has been challenged under Arizona’s strict freedom-of-religion statute,” wrote Flagg. “While SOCE bans have withstood religion-based challenges well, Arizona has a strict statute, A.R.S. § 41-1493.01, that applies the highest level of scrutiny to laws that “substantially burden” religious exercise.3 A burden on religious exercise is not “substantial” unless it puts “substantial pressure on an adherent to modify his behavior to violate his beliefs.,,4 The Ordinance is limited to the practice of SOCE on minors and for a fee in part to avoid any problem under the Arizona statute. Because the Ordinance would leave open the possibility of practicing SOCE, even on minors, without receiving a fee, it would be difficult to successfully argue that it imposes a substantial burden. If, however, a challenger were to be able to show a substantial burden, the challenger would likely prevail because the law would be subjected to the highest level of scrutiny, which few laws survive.”

At least one Pima County employee in the Communications Department was hard at work last week rallying support for the ordinance. On Friday, Communications employee, Jason Ground, posted on the GENDERowdy Tucson Facebook page: 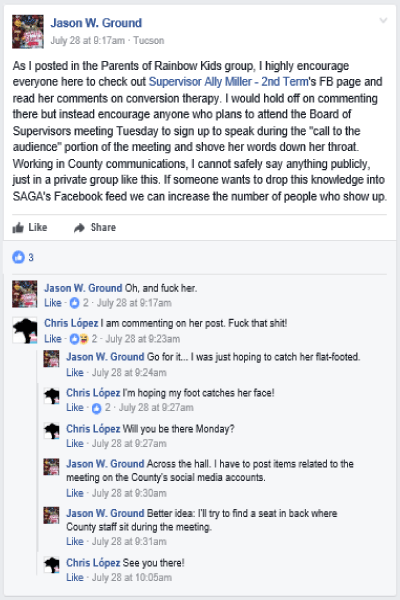 As I posted in the Parents of Rainbow Kids group, I highly encourage everyone here to check out Supervisor Ally Miller – 2nd Term’s FB page and read her comments on conversion therapy. I would hold off on commenting there but instead encourage anyone who plans to attend the Board of Supervisors meeting Tuesday to sign up to speak during the “call to the audience” portion of the meeting and shove her words down her throat. Working in County communications, I cannot safely say anything publicly, just in a private group like this. If someone wants to drop this knowledge into SAGA’s Facebook feed we can increase the number of people who show up.

Ground was referring to Miller’s Facebook post dated July 27. She wrote, “I believe we should allow parents to decide how to raise their children,” and included a copy of the ordinance. Shortly after his post, Ground’s friends left multiple posts with included f-bombs, which they later removed. The apparent threats to Miller were not removed from the GENDERowdy Tucson Facebook page.

The supervisors also approved a $75 million, five year master agreement for “wastewater conveyance system.” Miller pointed out to fellow supervisors that approving a $75 million master agreement, which is essentially a blank check, is not best practice. Her advice was ignored, and the supervisors voted 3-2 in favor of approving it. Later, in an interview on the James T. Harris show, Supervisor Christy stated that little was known about the agreement. “To be perfectly candid and blunt with you I’m not entirely sure,” said Christy referring to the agreement. Christy said “Apparently it has something to do with improvements to the wastewater system and modifications but it was very nebulous and convoluted. I have to give credit to Supervisor Miller on this because she is kind of a contractual wonk and studies these things because of her experience with defense contracts. She recognized that there were some very significant issues with the bidding process that’s involved as well as committing $15 million a year for the next four years without having to come back each year to the Board for the $15 million.”

“It would seem to me,” continued Christy, “if we’re going to approve $15 million and it’s going to be for the next four years we should approve that $15 million every year not just say ‘okay we’ll approve this for the next four years, and in four years will see you.'” Harris asked Christy if the Bronson, Valadez, and Elias knew what the contract was about. Christy responded, “They sure seem like they did because they voted so quickly on it.” Christie said that the supervisors did not spend enough time on the issue to get into the “nuts and bolts on it but enough time for Supervisor Miller to ask significant questions about it. I have to say that it was not well received,” said Christy referring to County Administrator Chuck Huckelberry, who sat red-faced during the discussion. Christy said that Huckelberry brushed off concerns by stating that this was something they had done before. “I kinda think $15 million is a hell of a lot of money and if they want $15 million every year they should come back to the Board every year and justify that,” said Christy.

[Listen to the interview here]

Miller reminded Huckelberry that former-supervisor-now Congressman Raul Grijalva had complained about the practice years ago and nothing has changed.