The campaign is part of Housing and Residence Life’s “Commitment to Inclusive Communities,” which fosters “inclusive communities where individuals are valued, safe, and heard.”

Because they are committed “to understanding both individual and shared human experiences and advocating for the respect and inclusion of all identities,” some costumes have been deemed inappropriate.

Housing and Residence Life offered a definition of cultural appropriation to students:

“The taking – from a culture that is not one’s own – of intellectual property, cultural expressions or artifacts, history and ways of knowledge.” (page 12) Bruce Ziff & Pratima V. Rao, Introduction to Cultural Appropriation: A Framework for Analysis, in Borrowed Power: Essays on Cultural Appropriation 1, 1997

Does it perpetuate racist stereotypes?
Are you misrepresenting people’s culture based on current trends or pop culture?
Does it show love for the culture but stay prejudiced against its people?
Could choosing to wear this costume be hurtful or offensive to others?

Students are advised that “answering no to these questions doesn’t mean appropriation isn’t happening.”

The poster campaign suggest that ethnically identifiable garb is cultural appropriation if worn by a student not identifying as a member of the ethnicity represented by the garb. The poster campaign makes clear that items such as sombreros are not acceptable for certain students. However, the campaign is silent on other clothing items. For example, although zippers are the brain child and intellectual property of Whitcomb L. Judson, an American of British descent, there is no warning given to students to avoid that clothing feature if they are not of British descent. 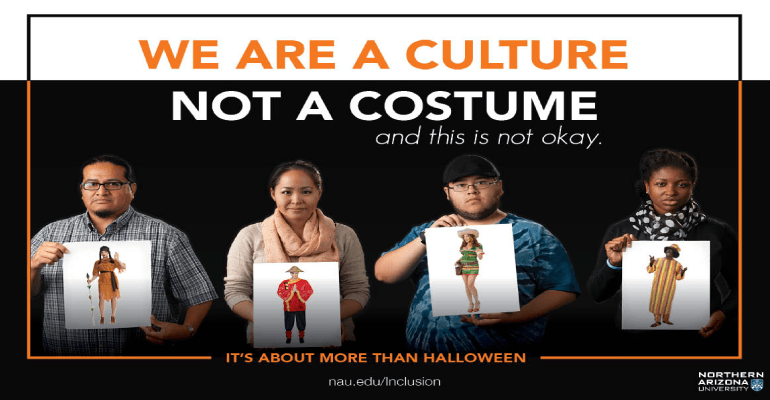