If you drive Interstate 10 between Tucson and Phoenix, about half way you pass between the Picacho Mountains (on the northeast side) and Picacho Peak (on the southwest side). Picacho Peak State Park is a frequent destination for picnics, rock climbing, and viewing spring wildflowers. 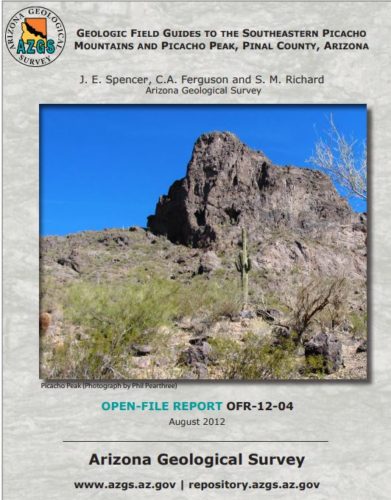 The Picacho Mountains consist largely of a compositionally diverse suite of Laramide to middle Tertiary biotite granite, muscovite granite, and heterogeneous to gneissic granite. At the southern end of the range, most of the crystalline rocks have been affected by middle Tertiary mylonitic deformation. Mylonitization is inferred to have accompanied normal faulting and ascent of the bedrock from mid-crustal depths to near the Earth’s surface. [Mylonitization is modification due to dynamic recrystallization following plastic flow.]

Ascent occurred in the footwall of a moderate to low-angle normal fault commonly known as a “detachment fault”. The crystalline rocks of the Picacho Mountains are part of the footwall of a south- to southwest-dipping detachment fault that is exposed only at the base of a small klippe of volcanic rock on a hill top in the southeastern Picacho Mountains. [A klippe is an isolated block of rock separated from the underlying rocks by a fault.]

Picacho Peak, itself, looks like the remnant of a volcano. However, it is an erosional remnant of volcanic rocks that were displaced from over the Picacho Mountains by a detachment fault.

For some spectacular views, see a drone flight around Picacho Peak (3 minutes):

Picacho Peak weather station – how not to measure temperature