On October 2, 2017, Pima County Sheriff’ deputies responded to a report of a theft from the Circle K located at 3280 West Valencia Road. Deputies learned three men jumped over the counter and began putting a large amount of cigarettes and alcohol into pillow cases then fled toward a nearby apartment complex 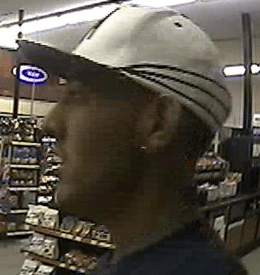 On October 8, 2017, three men entered the same Circle K, jumped over the counter and took a large amount of cigarettes before fleeing. During this incident the suspects were wearing bandanas covering their faces. The case was assigned to Community Problems Unit detectives who believe the same three men are responsible for both incidents. The suspects are described as Hispanic, between the ages of 16 and 20 years old. They are between 5’6” and 6’0” tall, with thin builds.

Detectives are asking for the public’s assistance in identifying these men. Anyone with information is asked to call 9-1-1. You can also submit an anonymous tip, with the potential for a reward, by text, phone, or by going to 88-CRIME.org.