The Gila Topminnow was once ubiquitous within the Gila River drainage, but its population declined due to introduction of non-native species, water impoundment and diversion, water pollution, groundwater pumping, stream channelization, and habitat modification. It was listed as an endangered species in March of 1967. This guppy-like, live-bearing fish is 1-2 inches long. Breeding males are jet black with yellow fins. Gila topminnows are omnivorous, and eat food such as detritus and crustaceans; but feed mostly on aquatic insect larvae, especially mosquitos.

According to a press release by the US Fish&Wildlife Service (FWS) et al., During a November survey, Gila Topminnows were rediscovered within the Santa Cruz River north of Tucson just downstream of the water treatment plants after a 70-year absence. Topminnows were also found in the Santa Cruz River just north of the sewer treatment plant in Nogales, Arizona, in December 2015. 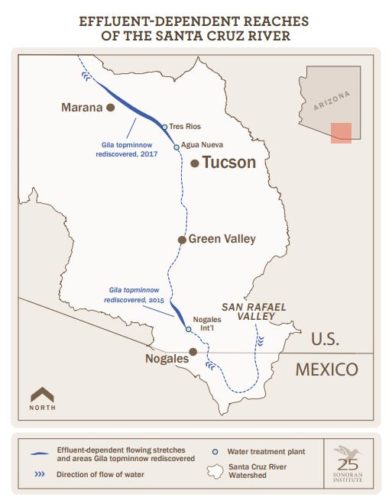 Here is the lede from the press release:

After an absence of more than 70 years, the endangered Gila topminnow has reappeared in the Santa Cruz River in northwest Tucson, fish surveys conducted in November confirm.

Scientists were hopeful native fish would return to the river near Tucson after the river’s water quality significantly improved following upgrades to wastewater treatment facilities releasing effluent (highly treated wastewater) into the river at Agua Nueva and Tres Rios treatment plants in 2013. The native Arizona species, listed under the Endangered Species Act, was rediscovered in the Santa Cruz River near Nogales, Arizona in 2015. Both sections of the river where the fish reappeared depend on releases of effluent, demonstrating the critical role this water plays for the river’s health.

More from the press release: “Finding Gila Topminnow in the Santa Cruz River in Tucson is the most significant conservation discovery since the species was listed as endangered in 1967,” said Doug Duncan, fish biologist with the U.S. Fish and Wildlife Service. “We are not certain how the fish made it to the Tucson reach of the river, but we will analyze the genetics of the fish and river flow data to see if we can make that determination.”

How did the fish get into the Santa Cruz River? In my opinion, captive-bred fish were put into the river or they escaped from nearby mosquito-control projects.

Pima will have a new ally in the battle against mosquito-borne diseases this summer: endangered Gila topminnow.

The Arizona Game and Fish Department (AZGFD) provided 500 of the native fish, which will be introduced into standing waters in urban county areas. The project is being done under the Department’s federal permits and an Endangered Species Act Habitat Conservation Plan between Pima County and the U.S. Fish and Wildlife Service. The three agencies are cooperatively spearheading this effort to reduce threats to public health in the county. The project is part of an overall plan by Pima County Health Department, Pima County Sustainability and Conservation, the Phoenix Zoo and Arizona State University to use the federally endangered fish to target mosquito larvae and reduce the threat of mosquito-borne diseases, such as the West Nile and Zika viruses. This approach is also being considered for future deployment in Pinal County and hopefully other county governments around the state.

Also from FWS: “The species is currently being reared at over 100 locations for reestablishment into numerous sites in Arizona. The Gila topminnow has been released at almost 200 locations in efforts to reestablish populations.”