Officers referred a 21-year-old male for an additional search of his Ford sedan as he attempted to re-enter the U.S. from Mexico on Friday evening. A CBP canine alert led officers to discover more than 54 pounds of cocaine, worth more than $614,000. 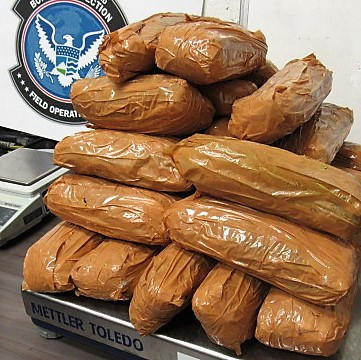 In the second incident, officers referred a 18-year-old male for further inspection of his Honda sedan when he attempted to enter the U.S. from Mexico on Saturday afternoon. A CBP canine alerted to an odor it was trained to detect, prompting further search of the vehicle. Officers found almost 34 pounds of methamphetamine in a non-factory compartment directly above the gas tank with an estimated value of $102,000. (Pictured to the right)

CBP officers seized the vehicles and drugs. The subjects were arrested and turned over to U.S. Immigration and Customs Enforcement’s Homeland Security Investigations.