Phoenix Mayor Greg Stanton issued a press release on Friday that gave hope to Sen. John McCain supporters that he was up returning to life outside his Cornville compound. McCain’s many fans were disappointed to learn that Stanton’s press release did not reflect reality.

Stanton’s press release was issued to announce the signing of a “multijurisdictional Statement of Intent for the continued development and revitalization of the Rio Salado.” The highly unusual release reads in part:

The signing ceremony took place today during the Rio Reimagined Launch during an event hosted by Sen. John McCain and Arizona State University at the Tempe Center for the Arts that several federal, state, regional and tribal government partners attended.

“We are excited about the next chapter of the Rio Salado and working closely with more partners to foster greater economic development and recreation opportunities for our community,” said Stanton. “I am grateful to Senator McCain for bringing our communities together and making this a higher federal priority so we can build on the progress we have made over the years.”

McCain is spearheading efforts to improve the Rio Salado and build on the decades-long efforts championed by former U.S. Rep. Ed Pastor.

“A potential large-scale infrastructure project that draws in economic development, water preservation, community connectivity and tourism is something we’ve talked and dreamed about for decades, but it has been slow going,” said Vice Mayor Thelda Williams. “We’re proud of our riverbed restoration at the Tres Rios Wetlands, but more can be done. As Sen. McCain’s legacy project, we are appreciative that he is re-energizing this key development.

“This effort honors the legacy of Ed Pastor and his service to our country, but more importantly it demonstrates the importance of collaborative governance,” said Councilwoman Laura Pastor. “When multiple jurisdictions across sectors come together and work in partnership for the good of the numerous populations they serve, then great outcomes can be achieved. To do this for the preservation and development of communities, as well as the protection of the fragile desert landscape and its wildlife, is truly something to be proud of.”

“The Rio Salado project offers tremendous potential for the residents of my district and our city,” said Councilwoman Kate Gallego. “I’m thrilled that Sen. McCain has chosen this as his legacy project. With his leadership, I’m confident this iteration of the Rio Salado project will continue to bring people together and celebrate the river for all that it offers us and all that it has already given our community.

For many years, the City of Phoenix has worked to revitalize the Rio Salado, with several projects along the river from State Route 143 to the east and 99th Avenue to the west. On the city’s west end, the Water Services Department treats effluent from the 91st Avenue Wastewater Treatment Plant and sustains fish and wildlife habitat at the Tres Rios Wetlands.

The senator’s wife, Cindy, was on hand for the event.

McCain has not been seen in public since before Christmas. The last publicly available picture of the ill senator was in a tweet by his daughter Meghan on March 18. In that photo, it appears as if the senator’s aggressive form of brain cancer is taking its toll. 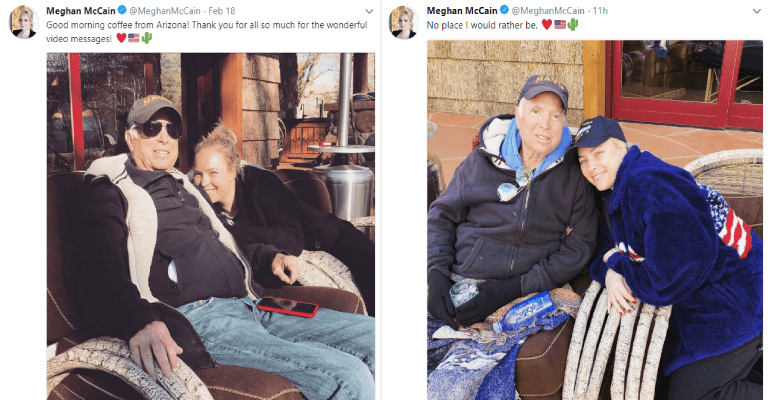