Last week, in anticipation of the protest in Washington and across the country for gun reform, letters were delivered to Arizona Rep. Bob Thorpe printed on Flagstaff High School letterhead. In turn, Thorpe reached out to the school’s principal, Tony Cullen, with accolades and suggestions.

The letters appear to have been written on photocopies of the school’s letterhead. The heading and salutation are typed while the bodies contain a variety of opinions on the issue of gun control. According to one student they were given choices of recipients. Choices included Flagstaff City Council members, U.S. senators, U.S. representatives, and Arizona lawmakers.

Thorpe wrote to Cullen in response:

I just received 12-hand written letters from Flagstaff High School students concerning school safety and gun control, please see the enclosed samples. The shooting in Florida were truly tragic. However, both the Florida shooter and the 2011 Tucson shooter, who injured or killed about 17 individuals including Congresswomen Giffords, had something in common — numerous interactions with law enforcement and school officials who failed to take the necessary actions in order to protect our citizens, and to help the shooters obtain needed mental healthcare and counselling, and to possibly restrict their access to weapons.

I appreciate your student’s passion for addressing this topic, and they may be pleased to know that Governor Ducey has indicated that he has a safe-schools bill in the works that will be considered by our legislature. In the meantime, as a resource to you, please review these two websites concerning school safety and gun violence statistics.

I decided to write to you because the actual letters from your students contained terrible, if not illegible, handwriting, poor spelling, grammar, and sentence structure. If I were their teacher, I would be truly embarrassed to send out these documents as samples of their student’s educational level and communication skills. This caused me to research the FUSD 2017 AZMerit scores for English Language Arts, where I found that grades 3-10 were between 2 -12 points below the statewide average percentages for those who simply passed the tests, and in the single percentage digits for those with high proficiency.

I would like to suggest that you request your teachers to assign topics to their students several times per year, where the students must write letters addressed to you. These assignments would provide you with an opportunity to evaluate their communication skills and educational progress. I would hate to think that the letters that I received represent the skill level of your High School students, the same students who may soon be writing resumes and cover letters as they seek employment opportunities, and complete applications and write essays as they apply for post-secondary education.

While it is understandable that educators do not want to be judged on student performance, the fact that no educator appears to take responsibility for the letter writing campaign, is inexplicable. Of course, because the letters could be described as political in nature, and it is against Arizona statute to use public resources for political activities, a teacher might want to avoid taking responsibility for the use of public resources. 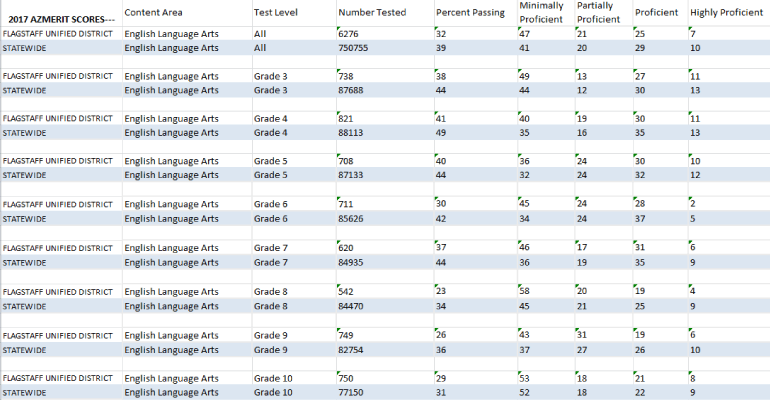