On Wednesday, Rep. Reginald Bolding took to the floor to expresses his outrage over quotes included in an opinion piece in the Arizona Republic penned by Rep. Maria Syms.  Syms cited quotes by rapper Lamar Kendrick in her article questioning the motives of Arizona Teachers United leaders Noah Karvelis and Derek Harris.

Let’s focus on Noah Karvelis. You would likely not want your children boarding his intellectual ark — or sitting in his exotic classroom.

He’s the media darling, teaching two years in Arizona with a provisional certificate. He prides himself on teaching the hip hop music of Kendrick Lamar (whose lyrics include “we hate Popo [police], wanna kill us dead in the street for sure…”) to 10-year-olds, indoctrinating them in “social movements and societal change” and “socioeconomic and racial privilege.”

In his online rants, Karvelis takes inspiration from virulently anti-American sources. He urges people to embrace ’60s radical Angela Davis, but neglects to mention her leadership of Communist Party USA.

He admires the teachings of Howard Zinn, another crank who was fired from Spelman College for “radicalizing students,” and he said President George W. Bush is the “moral equivalent” of vicious Islamic terrorist Abu Musab al-Zarqawi.

Ever expansive in his fondness for red revolution, Karvelis also credits the teachings of long-distance Communist academic Noam Chomsky.

Sym’s original version included Kendrick’s complete lyrics which include the use of a racial epithet. That word is used extensively in Kendrick’s works. For example:

Every nigger is a star

Who will deny that you and I and every nigger is a star?

In his attack on Syms, Bolding did not explain why the lyrics would be acceptable in a K-12 classroom, but are offensive in an article about them.

After nearly 90 minutes, Bolding and Rep. Geraldine Peten were found to have violated House rules against impugning another member.

House Speaker JD Mesnard said before the vote, “I don’t know why it’s so hard to follow the rules. It doesn’t matter whether you are white or black or brown on whatever the color the color of your skin is, you follow the House rules.”

#RedForEd: What’s About To Happen When Teachers Walk Out

How To Give Teachers A $10K Pay Raise

Syms on the other hand received loud applause when she explained why she included the lyrics in her article. “I think the one thing that we can all agree on is that these words are terribly offensive. If anyone would read the article, they would know that those words were used in the article to expose the offensive nature of language used by the leader of #Redfored in the classroom. Every person in the state of Arizona should be offended by these racially offensive words that are being used in our classrooms right now. Every person should stand up and oppose the use of these words. I don’t care if it’s an award-winning rap artist – that was the point. The point was to expose this leader for the radical ideas he’s peddling in our classrooms. The point is to expose this leader for the national socialist movement that he’s advocating for, through this #redfored movement. That is the truth. He said teaching is political; his own words indict him. That was the point of the article.”

#Redfored has been described by the AFL-CIO as a “national uprising.” Although it has been promoted as simply a campaign to raise teachers’ salaries, the Arizona Education Association and Arizona Teacher’s United rejected an offer of a 20 percent increase in pay by Governor Doug Ducey. That rejection and the decision to walkout (strike) today was seen as evidence by critics that organizers are strictly promoting the progressive “Resist Movement” agenda to fuel the “Blue Wave” this election cycle. 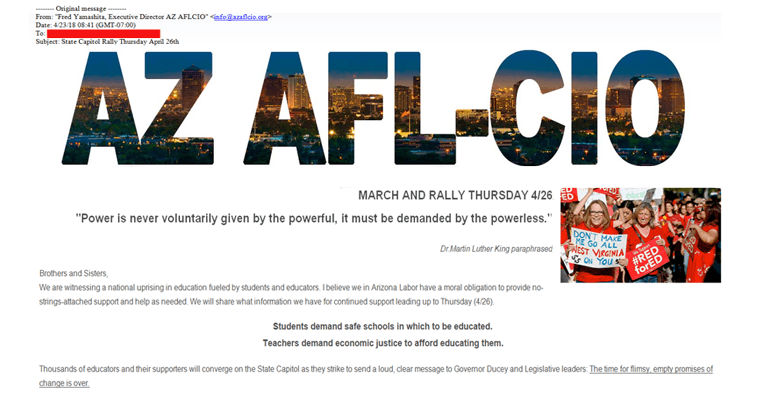