When Rep. Maria Syms boldly stated that the #Redfored movement organizers were socialists, she was jeered. When the leader of #Redfored, Noah Karvelis, spoke at the Socialism 2018 event in Chicago this month he was cheered. 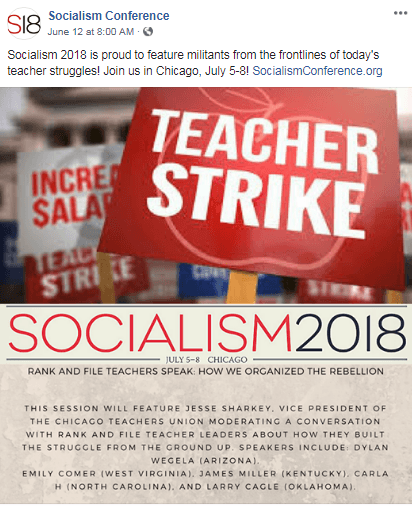 Karvelis scrubbed his social media presence and denied that he was leading a radical movement at the time. He and his supporters, including many in the mainstream media, went on the offense and took umbrage with Syms’ simple observation. The media was largely complicit, or they got played. In either case, Karvelis’ appearance at the Socialism 2018 Conference in Chicago from July 5-8, indicates that he and his “fellow militants” no longer care to hide their agenda, and it exposed the degree to which the media again failed to report on simple truths that would have profoundly altered the coverage of a major event (the #Redfored strike and rallies.)

Karvelis and his crew even went so far as to try to paint Syms as a racist in order to distract from the fact that she sounded the alarm that this was in fact part of a socialist movement.

Karvelis’ appearance however, may have gone unnoticed if not for conservative radio show hosts Mike Broomhead and James T. Harris on KFYI.

The two talkers shared audio of Karvelis’ speech. In that speech Karvelis is heard bragging about the fact that #Redfored had managed to collect over 200,000 signatures to get a wealth-redistributing tax increase on the November ballot. And he made it clear that the issues he was advocating for went well beyond simple pay increases and was, in fact, about building an organization to fundamentally shift Arizona to the left.

Which makes Syms’ statements about the ideology espoused by Karvelis and his fellow leaders all the more remarkable and accurate, and the unwillingness of far too many Republicans to stand by her all the more disappointing.

“What we did is we said we’ve had enough. Forget about the rules. We’re making our own rules,” said the braggadocios Karvelis to the Socialism 2018 crowd. “We’re standing up and we’re fighting back, and that’s what Arizona Educators United, and each one of these movements, truly says. It’s time for us to take control.”

Karvelis sent the crowd into a frenzy when he said, “So now, in November, Arizonans will have the option that we’ve been denied for so long. To fully fund our schools. Right now, it looks like it’s going to happen. We’re going to get a tax increase on the top 1 percent of income earners to generate $700 million.” The crowd chanted, “Tax the rich!” (See full video below)

Syms had made her statements about the ideology espoused by Karvelis and his fellow leaders during this past legislative session. Karvelis and his fellow radicals led a teacher’s strike under the auspices of increasing teacher pay. It became apparent to Syms and others that the strike was not part of an effort to win teacher pay increases when teachers opted to strike even after the Legislature and governor approved a massive pay increase package.