As part of the #RedForEd “movement,” educators from across our state of Arizona walked out on our children, abandoning their classrooms, violating their publicly paid contracts, and destroyed public trust, for 6 days this spring.

Teachers and administrators effectively deprived our children of their right, outlined in Arizona’s Constitution, to FAPE (Fair and Appropriate Public Education). Our children were cheated of six days of educational growth while those teachers and administrators partied on the Capitol lawn or enjoyed Happy Hour at nearby pubs even after our Legislature and Governor Doug Ducey signed the “20 x 2020” bill, essentially giving AZ school districts $300 million over the next 2 years.

The “20 x 2020” bill was also passed after voters said “yes” to Proposition 301, Proposition 123,passed budget overrides and bond elections in districts across the state. More money is the mantra, and apparently these statewide and local efforts were not enough in the eyes of some educators and activists.

Taken from an article in a publication called The Socialist Worker, is this information; “A number of activists from Arizona Educators United, which has been leading the organizing, attended the Labor Notes conference in Chicago earlier this month. Vanessa Arredondo-Aguierre, a second-grade teacher in Somerton in the southwest corner of the state; Rebecca Garelli, a seventh-grade math and science teacher in Phoenix and former member of the Chicago Teachers Union; and Dylan Wegela, a seventh-grade science teacher in Phoenix; talked with Lee Sustar about what’s at stake as the teachers continue their actions.”

In this same article, Rebecca Garelli, “a seventh-grade math and science teacher in Phoenix and former member of the Chicago Teachers Union,” according to The Socialist Worker, stated, “What’s happened is that you sign up to be a teacher, and you end up being an activist. That’s just the nature of our job now, because all we do is fight and fight and fight. You’re not a teacher anymore, you’re an activist.”

Noah Karvelis, who according to his curriculum vitae, focuses on “Critical Pedagogy, Critical Social Theory, and Hip-Hop Studies,” is currently a music teacher at Tres Rio Elementary in the Littleton Elementary School District.

Karvelis asked Arizona Education Association (AEA) President Joe Thomas “when are we going on strike?” Thomas responded, “Don’t wait for me,” so Noah started #RedForEd, and Rebecca created Arizona Teachers United, and we merged the two into Arizona Educators United (AEU), and that was that,” according to The Socialist Worker article.

On the second day of the teacher strike, educators coalesced around #InvestInEd. They immediately began gathering petition signatures to secure a spot on the November General Election ballot for the #InvestForEd measure that, if passed, will raise income taxes on businesses and private citizens.

Under the #InvestForEd scheme, the tax increases will break down like this:

In other words, under current law, someone with a taxable income of $600,000 pays $25,162. That same individual would pay $14,200 more if the measure is adopted. The Invest in Education Committee says that the measure will raise $690 million annually and will apply to less than 1 percent of Arizona households.

Is this a clear case of “targeting” a “certain demographic of our citizens in Arizona based simply on their taxable income”?

Is it fair to expect Arizona’s top 1% of tax paying citizens to have their income taxes nearly double in one fell swoop of the voting booth? Some may say this is evil-eyed and heavy-handed by the very public servants we trust to educate our children. In this quote by Rebecca Garelli, in The Socialist Worker article, we get a glimpse into the mind of the true intention of this “movement:”

On July 5, 2018 Center for Economic Progress Director David Lujan, union leaders from, AEA, AEU, Joshua Buckley, chairman of the Invest in Ed committee and president of the Mesa Education Association (MEA), announced that they collected 270,000 signatures — more than the required 150,642. The Arizona Chamber of Commerce spoke out against the proposal less than an hour after it was filed with the Secretary of State’s Office.

Arizonans for Great Schools and a Strong Economy chairman, Jaime Molera, joined forces with the Chamber and work began to examine every petition. Molera is a previous Arizona Superintendent of Public Instruction and creator of Proposition 301 which was approved by voters in 2000.

Interestingly enough, as we examined petitions for critical errors, it was becoming increasingly clear to us that the leaders of the Invest in Education “movement” were sloppy and overestimated the number of signatures submitted. One of the grave errors we discovered involved a box in the upper corner of each petition. Arizona law requires this box must be hand checked to acknowledge if the petitioner is PAID or VOLUNTEER and almost every petition had a typed-in X in the box.

Examiners also found petitioners who hadn’t filled in the county for their petition, or had pre-filled dates and addresses in the same handwriting but with different signatures. We also found notaries whose stamp or handwriting was illegible or the date they stamped their seal on the petition, did not correlate with the dates of signatures. We found notaries who only became certified the month before, which is not a violation but was certainly suspect. This “cause” was so important to them, but not enough to take the time to train their petitioners. Many petitioners were paid and from out of state; not even registered to vote in Arizona. However, as long as a petitioner is eligible to vote (not a felon), they may qualify to gather signatures and get paid for it. 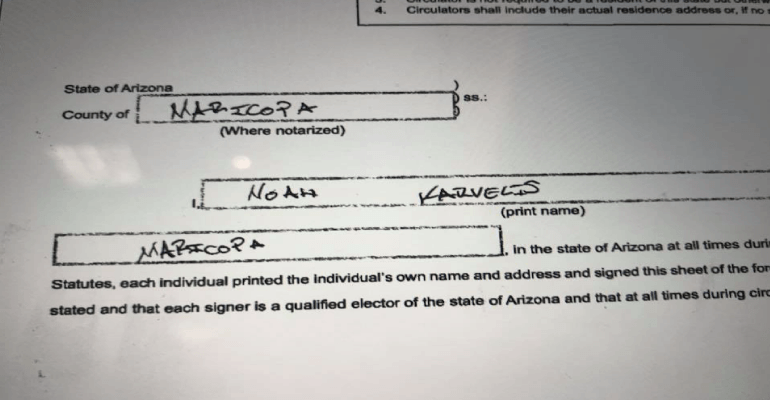 Finding what we found and knowing that the actual verbiage explaining the measure on each petition was misleading, attorneys for the Chamber filed a lawsuit with the Maricopa County Superior Court. The intention is to disallow the Invest in Education Act from making it onto the ballot for the November 6, 2018, election.

“I am confident that the judicial system will find the proponents’ work sloppy and misleading and will remove the initiative from the ballot,” Molera said earlier this month. “But, if for some reason we must continue this campaign through the fall, this poll confirms that public opinion is on our side and that a near doubling of the income tax rate will be rejected by voters. The drafters of this initiative were either sloppy or deceptive,” Molera said in a statement. “Unfortunately, we now must go to court to ensure that this poorly drafted, misleading initiative does not appear on the November ballot.”

On the afternoon of August 16, 2018, Judge Smith of Maricopa County Superior Court, ruled to allow the “Invest in Education Act” on the November ballot. This ruling is a clear example of judicial over-reach or a violation of the Separation of Powers doctrine as there exists no current legal challenge to the codes or regulations for ballot proposal signature gathering.

Judge Smith’s ruling basically says, strict compliance to the laws regulating ballot initiative signature gathering are restrictive to the rights of the Arizona electorate and, since these laws/codes/regulations are not currently being challenged as to their Constitutionality, he wished to not enforce strict compliance at this time.

Judge Smith is interfering with the statutory authority of the executive branch of AZ government, most particularly the Office of the Secretary of State. Regardless of whether one is for or against the “Invest in Education Act”, we need to be cautious whenever a member of the judicial branch interferes with the statutory authorities granted to another branch of government. Generally, authorities will presume a statute, code, or regulation is Constitutional unless a claimant is able to make a valid argument to the contrary. To do so is a classic definition of “judicial activism” as the court is, in essence, rewriting the implementing regulation while no challenge to the regulation was made in this case. This is NOT something neither the appellate court nor the AZ Supreme Court should countenance. At this time, the case moves to the appellate court and we wait to see while our good friends of liberty continue fighting for the people of Arizona.

Ballot measure to tax the rich for K-12 funding launched

How The Arizona Teachers Got Organized