On November 23, 2018, the U.S. Global Change Research Program (USGCRP) released Part 2 of the Fourth National Climate Assessment as required by law. [link] You may have read in the always credulous “mainstream” media about all the doom and gloom prophecies in the new report. Part 1 was released last November.

Both reports are based on computer modeling rather than on physical observations. Please read my comments on Part 1 here:

Much of the latest USGCRP report is vague and unsubstantiated. It offers no hard evidence, just vague assertions and claims that past climate change is no evidence about future climate change. It does not meet the standards of the Information Quality Act, and each page should be stamped: “Based on speculation, not hard evidence.” Part 2 is based almost entirely on one extreme climate model (RCP8.5) which is an outlier from most other models. Even the UN’s IPCC is phasing out that model. 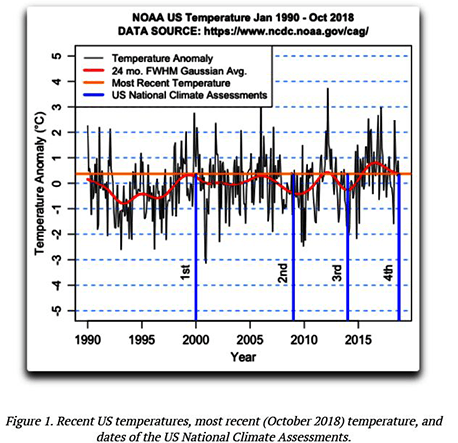 The scaremongers have a problem. Since the first National Climate Assessment in 2000, U.S. temperatures show no net change. Nature is not cooperating with the political narrative.

“The problem with these sorts of ‘studies’ is the main conclusion is already made before the actual work begins. These academics aren’t studying to see if the changing climate is caused by man or nature, it’s simply accepted as faith that it’s man’s fault. So these studies are done to reinforce preconceived notions and justify jobs. These academics who conduct them have to justify their jobs and bring in grant money, government grant money; our money.” – Derek Hunter, Townhall (link)

“This report from the climate alarmist Deep State in our government is even more hysterical than some United Nations reports. The idea that global temperatures could rise as much as 12 degrees in the next 80 years is absurd and not a shred of actual data and observation supports that. And as noted in Climate Change Reconsidered, sea levels have not been rising at an accelerated rate, and global temperatures have stayed largely the same for much of the last 20 years.” – Tim Huelskamp, Ph.D., President & CEO, The Heartland Institute

“I have never seen such blatantly absurd conclusions drawn entirely from mathematical models that use only a limited number of variables. Of course, this shoddy science by Obama-era appointees serves its real purpose: producing a preordained political outcome that puts more power and money in the hands of the United Nations.

“The physical evidence proves conclusively that sea level is not rising at increased levels. The frequency and strength of hurricanes has been declining for years, not increasing. The same goes for tornados, floods, and forest fires. In fact, there is no evidence that further increases in carbon dioxide emissions will have any deleterious effect on the planet or its temperature.

“This report is a scientific embarrassment. Not only does it rely on computer models to predict the climate through the end of the century, it relies on computer models from five years ago that have been laughably wrong, failing to get even close to reality since 2013. Happily, President Trump has on his advisory staff Dr. William Happer, who knows how flawed these models are and will advise the president to not base a single aspect of U.S. policy upon them.” – Jay Lehr, Ph.D., Science Director, The Heartland Institute

According to the Center for the Study of Carbon Dioxide and Global Change (http://www.co2science.org/):

“Real-world observations fail to confirm essentially all of the alarming predictions of significant increases in the frequency and severity of droughts, floods and hurricanes that climate models suggest should occur in response to a global warming of the magnitude that was experienced by the earth over the past two centuries as it gradually recovered from the much-lower-than-present temperatures characteristic of the depths of the Little Ice Age. And other observations have shown that the rising atmospheric CO2 concentrations associated with the development of the Industrial Revolution have actually been good for the planet, as they have significantly enhanced the plant productivity and vegetative water use efficiency of earth’s natural and agro-ecosystems, leading to a significant ‘greening of the earth.’” Read 168-page report

“Humanity evolved in the tropics about 200,000 years ago during periods of extreme climate change. The current warm period, the Holocene Epoch, started about 11,700 years ago. According to the International Commission on Stratigraphy, the earth has experienced three periods of climate change since emerging from the depths of the last Ice Age into the Holocene Epoch. Agriculture began during the Greenlanddian Age, the warmest time of the Holocene Epoch. Civilization began during Northgrippian Age, warmer than today, about 8200 to 4200 years ago. During the subsequent cooling, about 4200 years ago, humanity suffered and cultures disappeared. These changes appear to be unrelated to carbon dioxide (CO2). Yet the USGCRP declares that climate has been stable for 12,000 years and humanity is threatened by global warming from CO2?”

By the way: According to the U.S. Energy Information Administration, between 2005 and 2017, U.S. energy related emissions of carbon dioxide plunged by 861 million metric tons, a 14% drop due mainly to the fracking revolution. During the same period, global emissions rose by 21% due mostly to China and India economic development.