Climate has been changing for about four billion years in cycles large and small all by itself. Climate will continue to change no matter what humans do or don’t do.

Carbon dioxide emissions from burning fossil fuels is the major bogeyman of our time. As H.L. Mencken wrote: “the whole point of practical politics is to keep the populace alarmed and hence clamorous to be led to safety by menacing it with an endless series of hobgoblins, all of them imaginary.” As we will see below, neither increasing carbon dioxide emissions nor reducing such emissions will have a significant effect on global warming.

Even the UN IPCC admits that the climate change bogeyman is about money and power, not the environment. The real goal of UN climate propaganda: “We require deep transformations of our economies and societies.” – UN climate chief Patricia Espinosa. “One has to free oneself from the illusion that international climate policy is environmental policy. Instead, climate change policy is about how we redistribute de facto the world’s wealth” — Ottmar Edenhofer, International Panel on Climate Change (IPCC).

Let’s review the “greenhouse effect” to see if carbon dioxide is really a major factor in controlling global climate.

We begin with a very simplified review of what the greenhouse effect is. Solar radiation, mostly short-wave radiation, passes through the atmosphere and warms the surface. In turn, the heated surface re-radiates energy as long-wave infrared radiation back to the atmosphere and eventually, back to space. 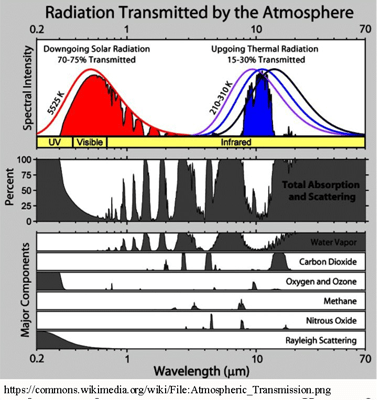 Even the IPCC agrees that the hypothetical capacity of carbon dioxide to change temperature is given by the formula: △Tc = αln(C2/C1), where △Tc is the change in temperature in degrees Centigrade and the term ln(C2/C1) is the natural logarithm of the CO2 concentration at time two divided by the concentration at time one. The constant α (alpha) is sometimes called the sensitivity and its value is subject to debate. This relationship was proposed by Svante August Arrhenius, a physicist and chemist, around 1896. This logarithmic formula produces a graph in the form shown below. This shows that as the concentration of carbon dioxide increases, it has less and less influence. This graph is the pure theoretical capacity of carbon dioxide to warm the atmosphere in absence of any confounding feedbacks. The different curves represent different values of sensitivity. 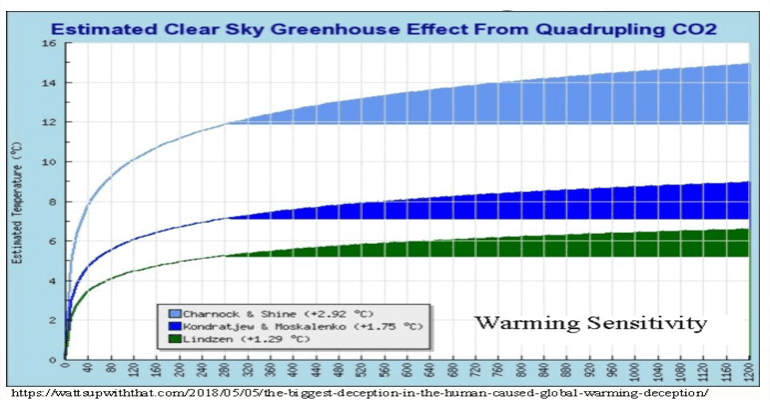 Carbon dioxide is currently about 400 parts per million (0.04%) of the atmosphere. Yet this nearly negligible amount is touted as the main driver of global temperature. The climate system consists of two turbulent fluids (the atmosphere and the oceans) interacting with each other. As the IPCC rightly says in its Third Assessment Report: “In climate research and modeling, we should recognize that we are dealing with a coupled, non-linear chaotic system, and therefore that the prediction of a specific future climate state is not possible.” The claim that one minor variable acts as the major control knob is absurd.

In the graph, the numbers shown in parentheses are the estimated temperature increase from quadrupling carbon dioxide concentration. Many climate models use much higher values for the sensitivity. That’s why most climate models run much hotter than measured temperatures.

I have often heard it claimed that without the “greenhouse effect” Earth would be an ice ball. Well, it ain’t necessarily so. There is an alternate hypothesis of what warms the atmosphere and this alternative is supported by physical evidence.

Scottish physicist James Clerk Maxwell proposed in his 1871 book “Theory of Heat” that the temperature of a planet depends only on gravity, mass of the atmosphere, and heat capacity of the atmosphere. Greenhouse gases have nothing to do with it. Physical evidence supports this hypothesis. See more of this story here:

The “greenhouse” hypothesis of global warming is not supported by physical evidence, see:

A simple question for climate alarmists – where is the evidence.

On the other hand, there are several lines of physical evidence showing that carbon dioxide emissions do not intensify the “greenhouse effect” see:

The global push for renewable energy generation of electricity is based on the false premise that we need to reduce carbon dioxide emissions to forestall dangerous warming. How much warming is dangerous? The IPCC says 2°C is dangerous. They are ignoring the Cretaceous Period when global temperature was at least 10°C warmer and the Paleocene-Eocene when temperatures were up to 19°C warmer. (link) The IPCC’s arbitrary 2ºC (3.6ºF) “tipping point” has no basis in science. In fact, during the last 10,000 years, the temperature has cycled several times through warm and cool periods of 2ºC or more. 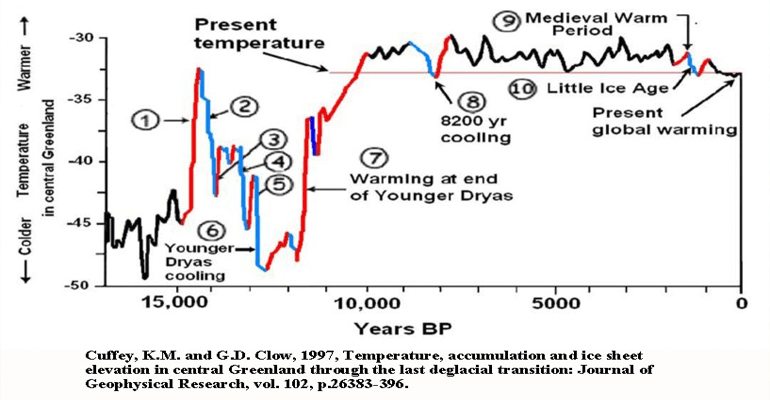