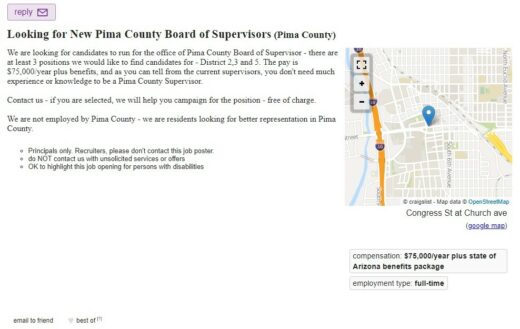 Pima County residents are reaching a new level of disgust with the Pima County Board of Supervisors. A Craigslist ad has been posted looking for candidates to run against the current BOS members in districts 2, 3, and 5. However, with Steve Christy’s recent support of mortgaging county property to build millions of dollars of roads for wealthy businessman Don Diamond, some might want district 4 added to the list.

The ad offers to help in their campaigns free of charge and informs potential candidates, that based on the current BOS members, candidates don’t need much knowledge or experience to qualify.

Who is behind this ad? Based on early social media posts, it looks likely that former candidate for BOS John Backer may be involved. During his campaign against Steve Christy and Marla Claussen in 2016, Backer used creative marketing to reach large numbers of people all the smallest budget of all the candidates. Some of Backer’s work includes a meme which refers to Supervisor Bronson as a “Submarine” referencing her destroying a county vehicle by ending up in a wash during a storm: 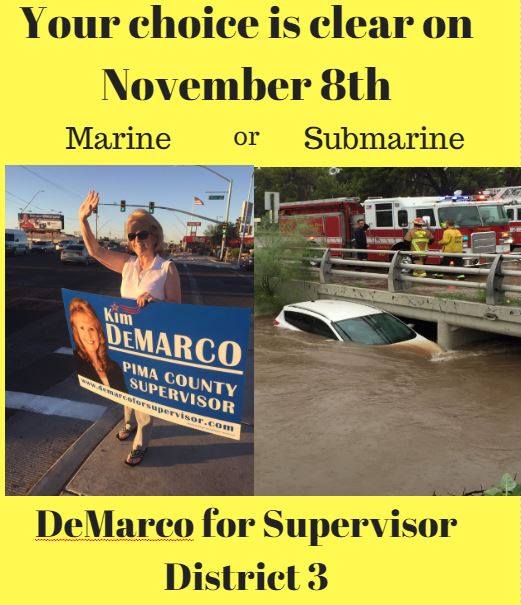 We reached out to Backer, who told us, “The ad was created to help communicate to our community that the positions exist and pay very well. Remembering back to when I started my run for Supervisor in 2016, I didn’t know what I didn’t know, and I feel that many people are interested in serving our community, but don’t know where to start. I’m helping to change that – based on my personal experience, I want to help others to get started in helping to serve our community. I’m willing to talk to anyone, regardless of party, to help them understand what it takes to get started in local politics. Changing our Board of Supervisor majority will help reflect the will of our residents – repair our roads without increasing our already high taxes, quit lending money to wealthy business people on such projects as 16 million to Don Diamond’s Rocking K development, purchasing a bowling alley for more than appraised value, and subsidizing World View in their building of hydrogen bombs near Raytheon and Tucson Airport to name a few.”

If you are interested in earning $75,000/year in the Tucson area or know someone who does, respond to the ad quickly. It is likely the powers that be will do what they can to remove the ad quickly.