Cindy McCain, the wife of the late Sen. John McCain retweeted an ugly message Tuesday she received in response to the Twitter war raging between President Donald Trump and the McCain family.

Cindy McCain claimed she was sharing the tweet to “make sure all of you could see how kind and loving a stranger can be.”

Tiffany Nicole had sent a profane, insulting social media message to her about her husband.

Instead she unleashed even more hate and acrimony when her followers decided to harass the harasser. Nicole has apparently taken down her Twitter and Facebook accounts.

Trump had tweeted furiously this weekend quoting former independent counsel Ken Starr regarding McCain’s involvement in pushing the discredited Steele dossier. “John McCain was an American hero who did so much for the country,” Starr said Saturday on Fox News regarding the McCain report, “but this is unfortunately a very dark stain.”

Spreading the fake and totally discredited Dossier “is unfortunately a very dark stain against John McCain.” Ken Starr, Former Independent Counsel. He had far worse “stains” than this, including thumbs down on repeal and replace after years of campaigning to repeal and replace!

So it was indeed (just proven in court papers) “last in his class” (Annapolis) John McCain that sent the Fake Dossier to the FBI and Media hoping to have it printed BEFORE the Election. He & the Dems, working together, failed (as usual). Even the Fake News refused this garbage!

Trump was referring to Kramer’s testimony about the dossier that was unsealed on Thursday and reported in the Daily Caller, as well as joking statements frequently made by the Senator about being last in his class at the Naval Academy. 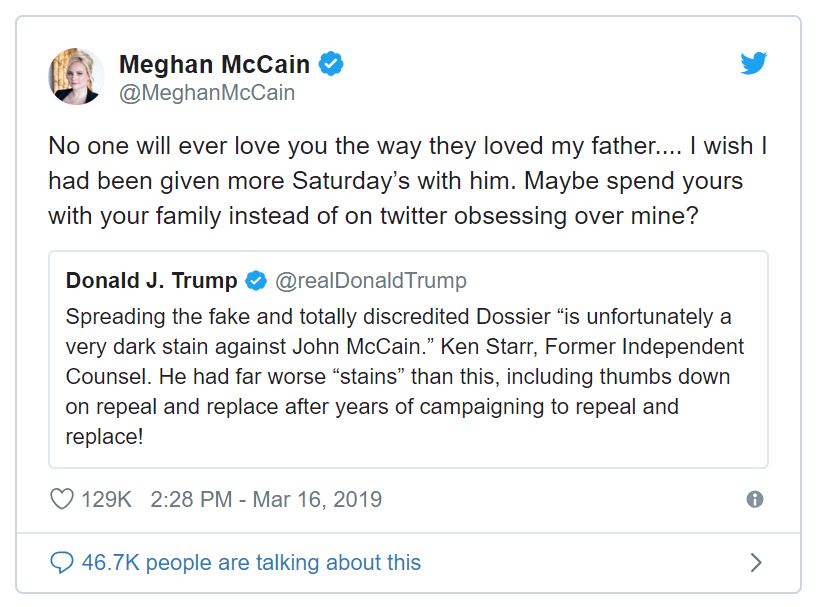 Then on Tuesday, Trump told reporters, “I was never a fan of John McCain and I never will be.”

Prior to his death, McCain asserted that he had no regrets about his role in the release of the Steele dossier. McCain claimed that he had his operative, David Kramer, push the baseless report because it was “what duty demanded I do.”

In his book, “The Restless Wave: Good Times, Just Causes, Great Fights, and Other Appreciations,” McCain also acknowledged that he delivered the dossier to then-FBI Director James Comey. “Anyone who doesn’t like it can go to hell,” wrote McCain.

Mrs. McCain’s share appears to have taken the war to a whole new level.

I want to make sure all of you could see how kind and loving a stranger can be. I’m posting her note for her family and friends could see. pic.twitter.com/GoNCm0fv4U